Stratics Veteran
Stratics Legend
Siege received the Void Pool Banner today for completing the most rounds of any shard. Its located just south of the EM Reward Hall. Congrats again.

Stratics Veteran
Stratics Legend
awesome job guys! I hope this is something that stands for a loooooong time!!

Stratics Veteran
Stratics Legend
UNLEASHED
Actually I love it but I would sure love to break are own record.

Stratics Veteran
Stratics Legend
UNLEASHED
Well hrm, you could always invite non guild members, and have it occur at a more reasonable time of night.
I

Alumni
Stratics Veteran
Stratics Legend
I don't think you have much idea how any people were involved or how long it took.

GarthGrey said:
Well hrm, you could always invite non guild members, and have it occur at a more reasonable time of night.
Click to expand...

There were people there from all over the Alliance... The time was discussed by everyone who attended ( White Council Alliance has members from more than one continent ) and we compromised as best we could.

Stratics Veteran
Stratics Legend
On or about October 20th in 2012, the Japanese Shard Hokuto set the All Shards Record for Void Pool waves completed at 204, breaking the then current Siege Record.

Wolfman said:
It was about time someone broke our record......finally something to do again.
*Heads to the tactics room to plan strategy and mobilize the forces*
Click to expand...

Over the next 21 months members of the White Council Alliance (which includes members from several different Alliance Guilds) attempted to surpass the Hokuto record, with our final and All Shards Record setting day coming this past July 20th, 2014.

Not only did we set the bar very high on that day, we accomplished the feat with only 28 members. Of course it's fair to say that most of the 28 had been along on prior attempts.... We were all quite dedicated, to say the least...

In fact, we had failed on our last attempt - a month or two before this one - but in doing so we recognized the final modifications needed to complete our overall strategies and tactics.

If you spoke to any of the 28 members that were there, to a man/woman they would tell you that it could not have happened without the time tested leadership of Hoffs, Leader of GIL.

This is not necessarily meant to be taken as an endorsement of GIL (although I suppose I'd be remiss if missed the obvious opportunity here), but rather an endorsement of what a dedicated team of fun loving, challenge seeking people can do together on a weekend...

Here's an image of the Void Pool Record site on Siege that includes UOCartographer for reference....... 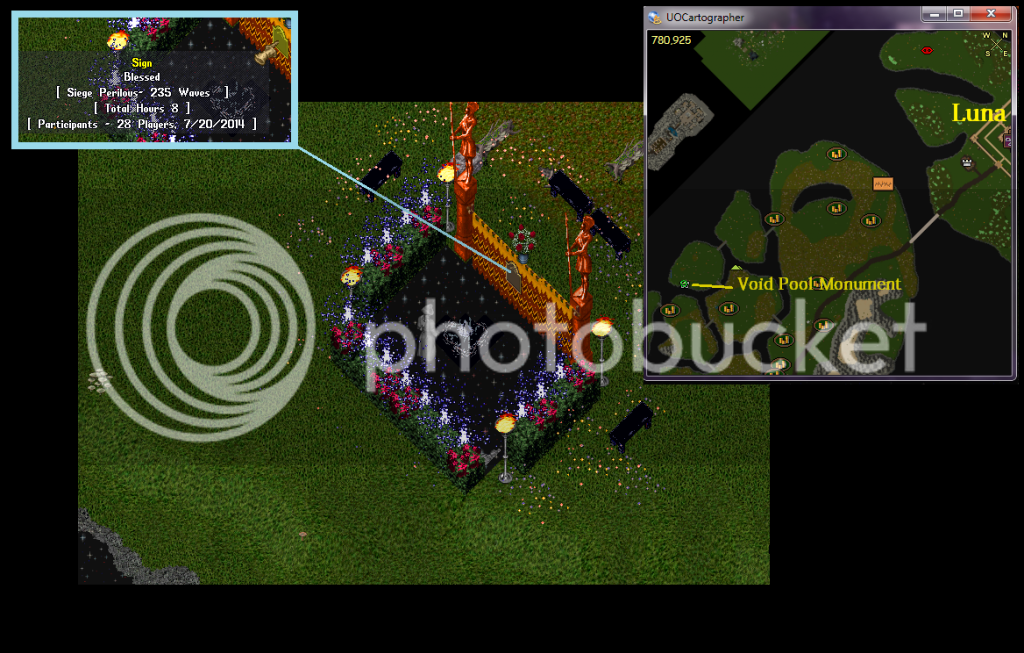 Stratics Veteran
i have to say awesome work. you all work hard to get it....:bowdown::bowdown:

Queen of The Outlaws

Stratics Veteran
Very nice folks! Wish I was around to see that
Z

Stratics Veteran
Stratics Legend
I was lucky to be part of the previous attempts. I know how hard it was to reach 180 (and the difficulty increase every wave). Let me tell you, in order to go that high, it wasn't just about having a number of committed people. Equipments, skills, positions, communication/timing, everything had to be perfectly orchestrated.

Tarquinn said:
Very nice folks! Wish I was around to see that
Click to expand...

The White Council is always looking for good people.... And from what I've heard rumored, our brothers and sisters in the far lands to the East have made plans to set a new record. I suspect we'll need to take back our place on top in the near future...

Zalfein said:
I was lucky to be part of the previous attempts. I know how hard it was to reach 180 (and the difficulty increase every wave). Let me tell you, in order to go that high, it wasn't just about having a number of committed people. Equipments, skills, positions, communication/timing, everything had to be perfectly orchestrated....
Click to expand...

Thank you for that, Zalfein... You are exactly correct. Everyone had a task and a place to be... Our plans allowed for each of us to have breaks, while the others took care watch for damage, etc... Best of all, we had a GREAT TIME doing it!

Stratics Veteran
Well if I'm around to help hold the title, you can count on me! I always down for an adventure or two
Show hidden low quality content
You must log in or register to reply here.
Share:
Reddit Pinterest Tumblr WhatsApp Email Link
Top