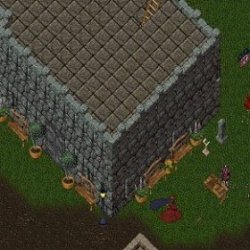 We got the old Citizen of Safe Haven, CSH guildstone back, Hoffs/GIL found it somewhere. It's not the first Safe Haven, SH stone or the Safe Haven Regulators, SHR but a stone I started Oct 2004 together with a guy named Saevel. The stone was mine but we changed it to CSH and with Saevel as guildmaster. Saevel failed to run the guild and after a month, we remade the guild as Safe Haven Citizen, SHC. We never ever saw Saevel again. I later found out who Saevel really was and that explain the drama around him. It was a crazy time with drama in several guilds. This guy wanted control over the main guilds on Siege, he did take over at least one guild and made a lot drama around a few others.
I don't know if the stone for Safe Haven Citizen, SHC still exist.
I was running SHC for a year, then the town died again. This stone however will be great if we get a town sign like Gilfane and Barter town, it can be a great part of the sign, even when this stone failed.
You see: Tina Tink [FF] (Freja's Family)
: You are now loyal to Saevel.
Guild Message: Guildmaster changed to: Saevel
Guild Message: The guildname has changed: Citizens of Safe Haven
Guild Message: The guild abbreviation has changed: CSH