[Blacksmithing] What to do with my valorite hammer?

I get the idea that metal armor is worthless now a days? Being that everyone is either a caster or a sampire. So leather armor and wood armor...

So if thats the case, that leaves metal weapons right?

If so, what steps should I take to creating some good weapons?

I guess I would want to start off trying to make some good sampire weapons.

Sorry for all the questions, I looked around but couldn't find much info on crafting weapons and metal armor...

Stratics Veteran
Stratics Legend
UNLEASHED
everyone is a caster or sampire? no clue where that came from.

if u want to craft metal armor, make the SE armor that automatically puts the mage armor mod on.

if u want to craft wpns, double axe/bladed staffs probably the most widely used by sampires.

with some of the questions ur asking, im wondering where u got the val hammer/60ash/30 talisman....good luck with it
T

I'm sure they sound like newb questions but I just came back from a very long break and pretty much have to relearn quite a bit and catch up with all the new material.

I had the valorite hammer from when I use to play back in the day. The other two items I just bought from vendors since I knew they were essential to making high end stuff.

So anyway, isn't it a bad idea to make the SE platemail since the mage armor takes up a property leaving you with 4 out of 5? If I need mage armor I can just make leather and save the property.

As for the caster/sampire comment... What I really meant is I can't really think of any classes that would benefit from having platmail more than they would from leather or wood armor... If you can help me with that I'd be grateful.

As for the crafting process for weapons... am I correct to assume that the process should be to use the ASH, runic and talisman and craft the weapons out of regular ingots and then use PoF's on the ones that are worth anything? Is there anything else I can do to optimize the weapons I make?

Thanks for your help.

Moderator
Professional
Stratics Veteran
Stratics Legend
Wiki Moderator
UNLEASHED
Campaign Supporter
The mage armor doesn't take one of the 5 runic properties, from the Samurai Empire Plate styles - it's a freebie - just like how many Mondain's Legacy item recipes include a free additional property in addition to the ones from the runic.

Of course, the only weapons made by a valorite hammer that will be imbuable (With the Imbuing skill) will be those with Damage Increase greater than the base as a property (and even then, all you'd be able to do is adjust the properties already on it up or down).

The same holds true for armor, and those with the free 6th property of Mage Armor won't even be imbuable to adjust levels (but with properties starting out at 85%, since the changes almost 3 years ago, do you really NEED to adjust anything?)

Changes you might need to know about, depending on when you left.

April 2005: Arms Lore given a purpose. It increases the Exceptional bonus for weapons and armor by 1 point per 20 points of Arms Lore Skill, during crafting. So, instead of weapons being +35% and Armor getting +15 (normal) or +6 (runic) random extra resists, a crafter with GM arms lore gets +40% DI on all weapons (and the extra +5 stacks with runics, so a runic weapon can be up to +55%), and either +20 or +11 random resists. As a result, most crafters have GM Arms Lore.

February 2008: The Tailor & Smith Runics had their minimum property intensity values revised radically upward, and had the max intensity per property changed to 100% for all of them. So, a Barbed Runic now makes items with 3-5 properties of 50%-100%, and a Valorite runic is 5 properties at 85%-100%. As even Spined and Dull Copper runics can make items with max intensity for 1 property (maybe 2, or even 3 for the spined runic), those formerly worthless runics have made a comeback as tools to make items for later imbuing (as if you can get one property that's normally expensive to Imbue on the item in crafting, that makes the imbuing process that much easier for the rest).

Stratics Veteran
Stratics Legend
If you have a val hammer and are itchin to burn it, id just do it. Realistically, theres only a very small chance that youll get something equal to or better than with imbuing. But, if your lucky and do get that perfect 6 mod weapon, well thats just awesome What im saying is, i would hate to train up armslore (its not that hard but still a pain) and then excitedly burn the val hammer, only to be rewarded with relatively "low end" weapons.

Back to your question tho, make what you want. If you want to make a metal suit for one of your characters, make it. If you have a macer and would like a really nice mace, make them. The mondains legacy special weapons are a nice choice (adds one small mod to an already 5-6 mod weapon) I tried making a nice thundering ornate axe axe for my sampire, but knew it would be very unlikely to get the swing speed increase i needed. Alot of people make leafblade of ease because its a good reseller.

Personally, i wouldnt make armor unless you have gm arms lore. If you do, make the Samurai empire arms and gorget (slots most often not taken up by arties)

If you dont have armslore, and just want to burn the hammer, make weapons, the slight damage increase is alot less of a deal than the added resists.

Personally, if i had a val hammer right now, id probably make krysses or leafblades. This is because of swing speed. On slow weapons if you dont get max ssi the weapon is pretty much useless for most people. On a kryss you dont need any ssi, on a leafblade you get get away with none also, although it doesnt hurt.

Thanks very much guys! I really appreciate the efforts you took to answer my questions! I'll let you know what I try to make and how it works out.
T

I want to make a Sampire so here is what I made. The only recipe I had weapon wise was for the leafblade of ease and I want to try to make a good armor set with the wood armor. So I just went all out on the weapon: 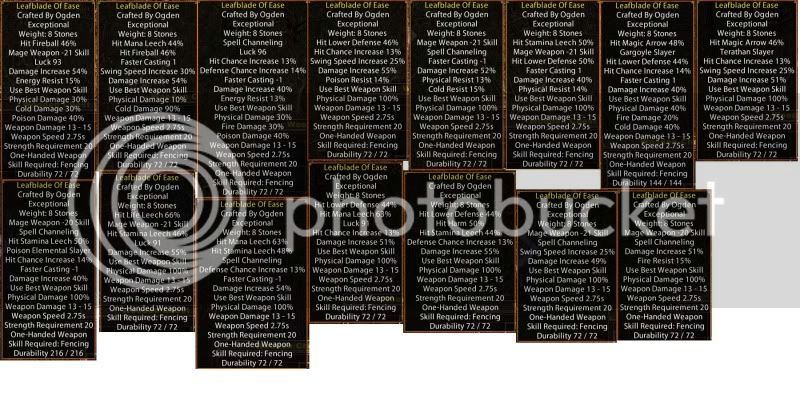 It looks like I might have one or two good weapons in there. What do you guys think?

Are any of those weapons worth anything? And if so, what classes would they work best with?