UO Event Moderator
Stratics Veteran
This message is posted on behalf of Aryala, Governor of Trinsic.

Sunday 14th of December, from 8pm BST / 9pm CET at the Counselors Hall in Britain.

Trinsic - A Call to Arms!


*drums and banners in the morning light. Noise and thunder, hooves on cobbles, steel on steel. The darkness comes, but the silence has passed. The game is afoot, the tiles on the board. Dupre can be heard, his voice thundering louder than the stomp of boots on the ground. He shall bring order. The witch of the south passes by, her words a whisper to kindle the flames. Drums roll. Horns blare. The time has come.*​
To arms! The City of Trinsic calls for help! Battle shall be joined on Sunday the 14th day of December in the 8th hour of the night. When the darkness comes so shall the emptiness. When the heroes gather so shall the night.​
Deep below the ground they listen. They know that it is too late, that they have won. Fate shall spin its web, but what they have done cannot be reversed. The cult has come. The darkness will come. The prophet has spoken true and the King will suffer. Darkness rises in the deep…​

OOC Note:
This is a part of Governor Aryala's storyline for Trinsic and not an 'official' EM event. I am however helping her with it as part of the Governor program and think it will be a lot of fun!
Last edited: Dec 13, 2014

Stratics Veteran
*with a low rumble the ground shakes and trembles. Even sitting in her office at the docks can she hear the screams of the citizens. With but a momentary hesitation she jumps up and sends the door crashing open with a burst of telekinetic power. Her steed shies away from the tremors but soon enough its hooves thunder through the streets of Trinsic. She knows that the darkness has come, even before the void yearns in front of her.*

This event will begin at the EM hall in Britain. Gates will lead onwards from there.
S


I just returned from a vacation in Vesper when a mob of angry merchants demanded to speak to the captain and demanded that I imprison the mayor Aryala.

Some crazy void hole has opened in the middle of bloody Trinsic and spewed out some monsters.

Lady Aryala and the town guards managed with a little help of the royal amateurs to beat back the first wave of creatures and control the area long enough for some crazy sorcerers to get that void gate under control. 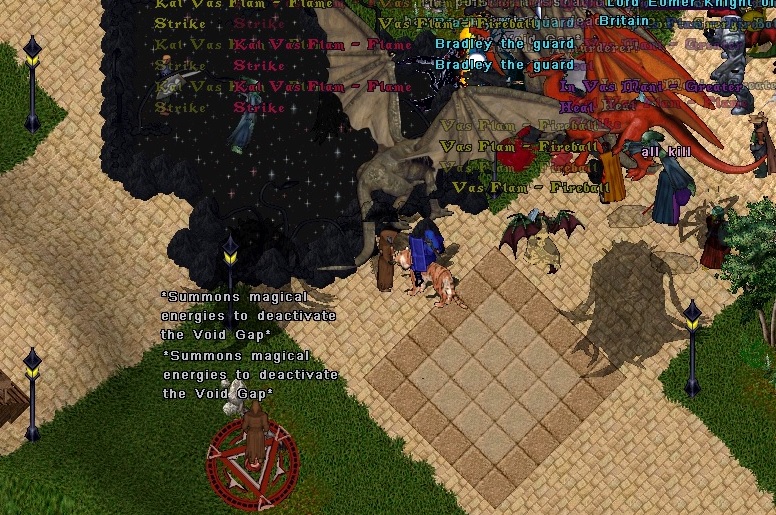 The sorcerers chanted some incantations souring all the milk of Trinsic if what I hear from townsfolk is true. The monsters also ran unchecked through town causing a lot of property damage and danger for customers and merchants alike.


Well after a fierce fight the void gate was sort of closed and we now have the remnants of the void in the middle of the street and angry townspeople.


Lord Dupre arrived after the fight said that he is concerned and offers a reward to those that manage to help. A fancy statue in the park to the hero who can save Trinsic from a hole in the ground. 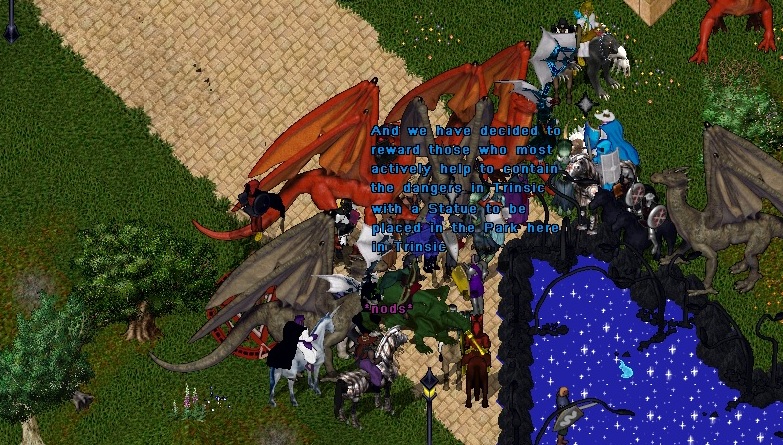 The Merchants will visit with you next week asking for reparations and will also ask for the resignation of Mayor Aryala. The townsfolk are annoyed but still think that it was not the Mayoress' fault and still believe in her.


I added some pictures of I acquired of the fights from a painter named Warhol.

He asked for money, but I took them and claimed it as evidence for the crown.