The Road to Mordor: Ten things to do in East Bree-land before you die

Alumni
Stratics Veteran
Stratics Legend
Over at Massively and thank you Justin Olivetti for putting this up.


Link: The Road to Mordor: Ten things to do in East Bree-land before you die | Massively


The Road to Mordor: Ten things to do in East Bree-land before you die 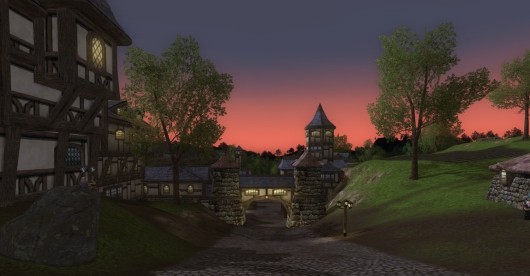 
It's been a long, long time since I've been able to work on this series, going through each Lord of the Rings Online zone quest by quest and pulling the top 10 locations, points of interest, or missions for the aspiring adventurer to check out. There are many reasons I've been tardy in continuing it, but no excuses today! Today we dine in the Prancing Pony, for tomorrow we die!

I decided to divide Bree-land into two separate articles, with this one covering the eastern portion and Bree proper, and the upcoming one tackling the western and northern areas. This is not just because Bree-land is a pretty dang big zone but because it's pulling double-duty: East Bree-land and Bree serves as the 1-15 leveling area for Men, while the west invites all four races to continue the journey to level 20.

While it may seem like a generic fantasy zone on the surface, Bree-land is actually teeming with interesting details, stories, and activities. I've never regretted leveling in the area (it's a darn sight better than Ered Luin), and it was pretty tough to limit myself to just 10 activities for this list. So what should you do in East Bree-land before you die? Let's take a look! 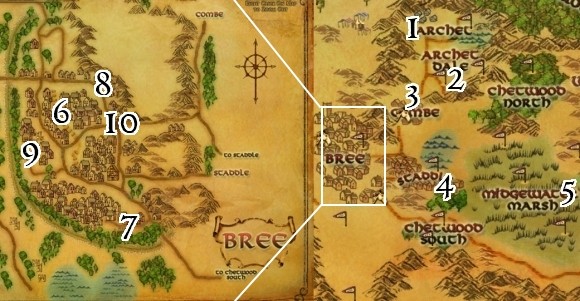 Since Archet got pretty toasted at the end of the Man/Hobbit tutorial, it's worth checking out if you've got a taste for the macabre. What used to be a town full of life is now a charred husk littered with coffins. But at least the human spirit will find a way, and there's always light at the end of the tunnel!

No, wait, that's spiders. As in, a whole motherload of them, swarming over caves, burrowing into houses, and draining the precious fluids out of scores of innocents. Archet really can't catch a break, can it?

The spider areas are incredibly well-done, atmospherically, and if you press on into one house from the underground caves, you'll end up encountering the spider boss, who drops an item that'll start an easy quest for you. Personally, I just like killing all her young brood in front of her eyes before taking her out. That's the Shire way. 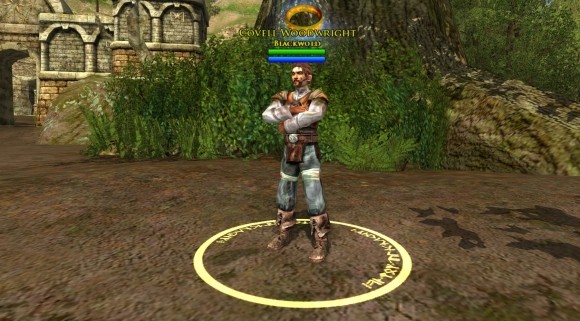 The story of Covell Woodwright sticks in my craw every time I go through these low levels. It begins with a mother asking you to find her son, but you soon discover that he's joined up with the ruffians outside of town and has no inclination to go back home. It's the Prodigal Son told without the son finding remorse or redemption, and I find that sad.

OK, there are few things cuter in the world than Hobbits in love, which is why it's my constant joy to be hooking them up. Seriously, I'm not even being sarcastic here. The quest line in Staddle in which you help stodgy suitor Eldo woo the Widow Foghorn never fails to leave me smiling -- especially when a dog ends up complicating matters!

Meet Sniken. Sniken is a neekerbreeker -- you know, the annoying super-insects you've been killing all through the Midgewater Marshes. But Sniken is different. Sniken is a pet. And Sniken is available for cuddles, as long as you aren't attached (har) to all your digits.

Maybe it's foolhardy for Roderick Neeker-friend to keep Sniken caged up like that, but it's no more foolhardy than actually feeding the thing instead of killing it and adding a fat +1 to your neekerbreeker slayer deed. At least you get to keep one of Sniken's fangs as a souvenir of your stupidity. 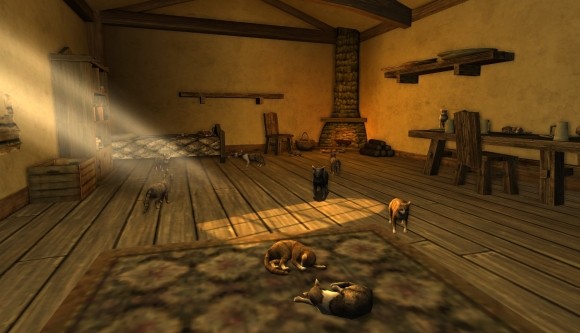 Let's talk about Bree for a minute. Like Bree-land itself, Bree can be easily stereotyped as a generic renaissance fair wannabe for those who don't know better. However, the truth is that Bree is a terribly fascinating town with loads of oddities that make it much more than you'd suspect. First-timers will be invited to go on a tour of the town courtesy of the mayor, and it's recommended you do so if only to get a feel for the layout and history.

Not on the tour, of course, is the Cat Lady's House. This incredibly strange locale is tucked away among the wooden stair path and is inhabited by zero people and loads of felines. Some find it quirky, others eerie (especially when you notice that each cat has a name), but it's certainly unique in LotRO.

The house may seem like it has no purpose, but it is a stop on one of the chicken play quests. Fun fact: The house used to be inaccessible by normal means; you'd have to get drunk on the Inn League keg and hope that you'd pass out and wake up inside. 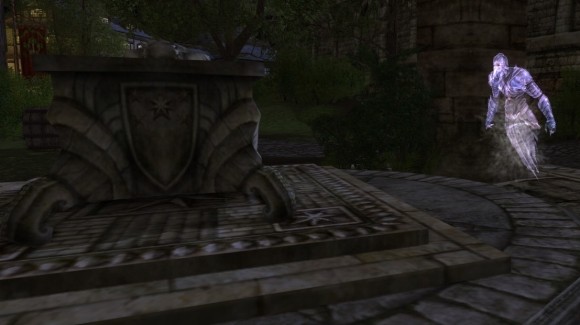 That's right, Bree's got its own ghost mascot! The Lost Shade pops out at night in front of his tomb in south Bree, cursing his very existence. Helping him shuffle off this mortal coil won't be as easy as strapping on a proton accellerator pack; you'll have to hunt down his brother in the Barrow-downs and make a wrong thing right.

It's worth it, though, to see the glimmer of thanks in the mayor of Bree's eyes and to be richly rewarded with not quite nine silver. 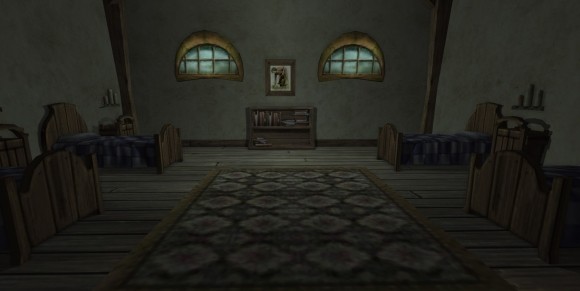 8. Kick back at the Prancing Pony

The Prancing Pony may well just be the most famous fantasy tavern in all of fiction. Be quiet, comments, nobody's talking to you here! So it behooves you to step inside its legendary doors and soak up the atmosphere.

It's actually really well-done, I have to admit. The main room is expansive and cozy at the same time, and the rest of the place is littered with nooks and rooms (including one that looks perfect for four Hobbitses) that beg to be explored. For lore geeks, the Prancing Pony is a nirvana of sorts with characters like Barliman Butterbur, Gandalf, and Aragorn lounging about.

Probably one of the tavern's greatest draws, however, is all of the player activity that bustles about it. Roleplaying events and impromptu concerts are almost always in session, and if you can't find it in yourself to stop sprinting to the next quest hub and just enjoy a song or two, then this might not be the game for you. 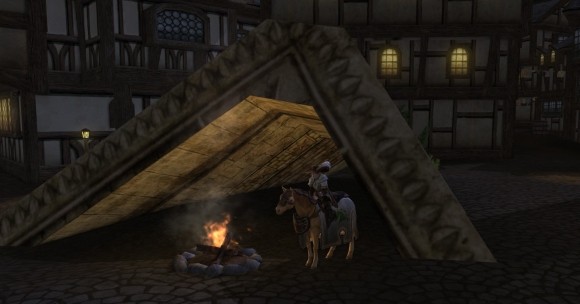 Not everything in Bree is as spic-and-span as it was upon its creation. Beggar's Alley and the attached ruins definitely represent the lower class in more ways than one. Broken windows, half-starved horses, and despair saturate the air... mmm. Feels like home already!

I actually really like the touch of having the newer city being built around these ancient ruins. It gives you a small sense of what came before, that there used to be something grander and more majestic before it became a spot where pigs pooped.

Bree's got a shocking number of buildings that can be entered, many of which exist only as eye-candy. In my travels around the game, I've never encountered any place that has interior windows that offer a pseudo-glimpse of the outside, and yet both Bree's Mess Hall and Lowbank's Estate do. I can't visit the Mess Hall too often without getting cravings for the feast of virtual food that I'm unable to eat, however. For shame!

Past articles in this series:

When not enjoying second breakfast and a pint of ale, Justin "Syp" Olivetti jaws about hobbits in his Lord of the Rings Online column, The Road to Mordor. You can contact him via email at [email protected] or through his gaming blog, Bio Break.