The Son of Tarrant let out a low growl as he marched down the tapestried hall, his knuckles clenched white into fists. Didn't she understand the choice he had made? What it cost him. The sacrifice...

"No," Peter chided himself sourly. He exhaled, his eyes drifting to the black glove covering his hand. He could still feel the dull ache. The burnt flesh. The bone that had been broken and reshaped. She can never understand what I've given up. He turned it over, spreading his fingers, testing the new hand. Nor will she. He parted the curtain and entered the candlelit chamber.

She must never know what was done here.

He paused at the edge of the bed, the dim light casting shadows across crimson sheets. They had spent the past hour arguing. About what he had become. Why he had given this all up. The promise of power as a Sorcerer. He had managed to convince her this was his choice. That it was of his own free will. That he did not want it. But he knew that was a lie. He would never again touch the Aether. Never feel the cold rush of tectonic mana rushing through him. And it was all for naught. Why did he give up what he was to join some logging company out of Minoc? He asked himself the same question a thousand times...

His amber eyes drifted towards a piece of paper tacked to the wall. It had faded in the three years since he put it there...
"This official document certifies that the nation of Britannia, prefecture of the High Council and Lord Francesco, appoints the name Crimson Alchemist to Peter Tarrant, in the name of His Holiness, Lord British.

The Royal Alchemist shall follow all orders and policies of the Royal Britannian Guard.

A research assessment shall be held once every year. In the case that the Royal Alchemist does not show signs of progress as a result of the examination, he shall be discharged from the services of Royal Alchemist.

The Royal Alchemist is entitled to the use of ample research funds, unrestricted access to classified documentation, access to various state facilities and a rank equal that of "Major."

- Malcador the Royal Inquisitor.
​
It was gone. His connection to the Void. The sight that had once allowed him to perceive the rudimentary elements of creation - Mana and Aether - and transmute them into a desired form. It had been a year since he had sacrificed it all to perform one forbidden act. One enchantment.

And I failed you, brother. He felt a single tear slide down his cheek. I tried. I just wasn't strong enough to bring you back...

He ripped the lamp from the desk and flung it against the wall, plunging the room into darkness. 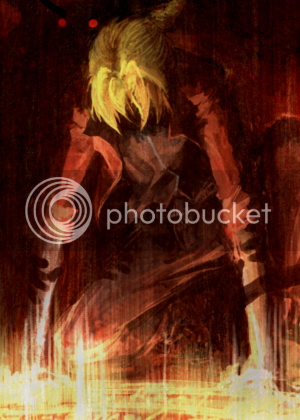 Alchemical symbols and Hebrew letters overlaid the structural matrix. Yohd. He. Wah. He. The Tetragrammaton. Latin phrases followed the subtle curve of the pentacles outer ring. The Emerald Tablet. Alchemy. Theurgy. The disciplines of man's ancient shamans and priests bound together in this one spell, this one blasphemous act for which there was no forgiveness: Human Transmutation. The act of toying with God's most perfect creation.

It was all he needed.

The Son of Tarrant had researched it for months. Poured over the libraries of the various alchemical societies and magical schools scattered throughout the realm. Mountains of Grimoire's and Scrolls hedged the basement wall. He had memories every rune, every sacred formula he required to form the circle. It was perfect.

He read out the list of components. All he would need to create a Human. A Homunculi. A Golem. “Are you sure about this?” The voice repeated again and again in his head. Peter paused, and closed the Grimoire. “I am,” he responded, addressing the shadows of the room. He continued, this time with determination in his voice. “I have never been more sure of anything in my life...!”

He knelt beside the circle. It was All Souls Night. The night the Pagans called Samhain. The night, they believed, when the world dies, and the barrier between the Universe and the Void grows weak. It was a myth, he had been taught, but if there was any chance of it helping, he was willing to test it. Tonight, he would open the Well of Souls, and retrieve from it the Cabal of the Ether. Tonight, he repeated grimly, I will bring you back.

He drew the athame across his finger, and let his blood drip down onto the pentacle. Sanguine. The color of life, the color of death. The color of a Tarrant. The circle responded to this sacrifice, and began to glow.

Peter clapped his palms together, calling on the Sight. How simple it was to him, magic. How complete. He studied the currents flowing across the ground. Mana, the leftover creative energy from the moment of creation, locked in the worlds core. Bubbling to the surface with every volcanic eruption, every quake and tremor. He looked up. With Mana, one can manipulate the Aether, and what happens in the Aether must also happen in the illusion that is the World. That is the basis of magic.

As above, so below.

He watched as the world began to swirl around him. Papers and scrolls cascaded from their perch. All nature was reacting to this one forbidden act, this one attempt to manipulate the natural flow. The consequences would be dire, but it must be done. You will burn no longer. Thunder echoed in the distance. The ground rumbled in protest. It was too late to turn back now.