Long live the Baron, and thank Avatar for what is now Five Years of Covian Freedom! Today, men and women from around Cove - and indeed the world - gathered in Covetowne to celebrate the fifth anniversary of the town's independence and liberation from the Orcish Occupation. The evening began with Fathers Roland and Hugo of the Covian Church holding mass in the town square. After several confessions and a rousing speech by Father Roland regarding how Cove has, by the grace of Avatar, overcome many obstacles since its liberation, Mass was dismissed. 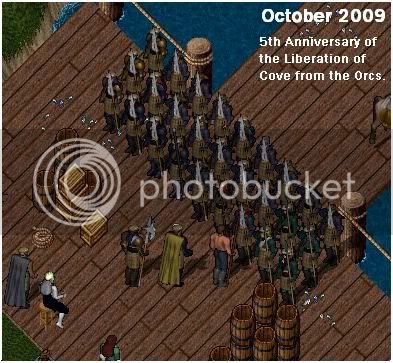 The Covian Army assembles for the weekly Promotions and Awards Parade.​
Moving on, the Grand Imperial Covian Army gathered at the Docks for the weekly Promotions and Awards Parade, with nearly forty Soldiers, including Former Command Gregor Eason and Baron Octiovus in attendance at the parade's peak. Among the night's promotions were Keane Wakfield to Junior Guardsman, and Katryn Wakefield, Jassi Cowin, and Star Summers to Watchman. Watchman Morgar Dyn received a Golden Quill, Commander Morana the Rage of Raaz, and both Officer Cadet Milako and Regular Grenadier Demarian Tel'var the Order of Leadership.

Once this was done, those present returned to the square for a word from the Baron and ex-Commander. The Baron, the Officer Corps, the Army, and the ordinary citizens of Cove were all praised for their extraordinary efforts and sacrifices towards making Cove a safe, successful, and prosperous town. 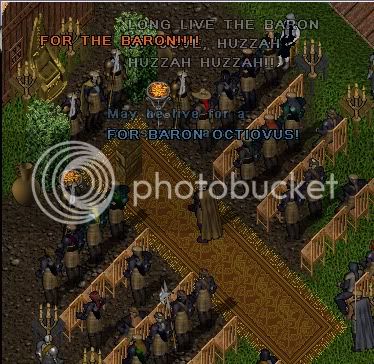 With the official business of the evening done, guests from Skara Brae, Vesper, Yew, and Trinsic arrived to take part in the celebrations. A market was held outside of the Healers', followed by a Jousting Tournament in the field the of Cove - won by Paps Chuck of Vesper, with Covians coming in second and third and a live performance by Willyfist in the Baron's honour. Senior Scout Jenifer Feather then hosted a footrace through the town, with Covians taking the three top positions in a display of athletic superiority. Finally, Scout Corporal Trefynwyd hosted a fishing tournament as the evening wound down.

All in all, the evening has been hailed as a great success. The Covian and Vesperian militaries were able to enjoy the evening together despite their differences and Yewish demands that Vesperians leave. Let us hope that this is the first of many peaceful evenings, and a sign of future prosperity for Cove.
Show hidden low quality content
You must log in or register to reply here.
Share:
Reddit Pinterest Tumblr WhatsApp Email Link
Top