Alumni
Stratics Veteran
Stratics Legend
On Friday a mysterious device was found on the road south of Stonekeep, Yew. 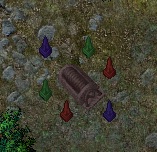 Along with that Traveler discovered a book inside Mericles cave which mentioned an attack on Yew at '8 o clock sun time'. These had me worried over the weekend and on Sunday I received a tip the attack would be that night.

At Sunday, A little after 7:45 I headed towards Yew, It seemed quiet and I thought the best place to stay was near the mysterious device on the road.

At around 7:55 the Commander of the Royal Guard, Fynn Barrett arrived and asked myself and a few others who had arrived what this device was. 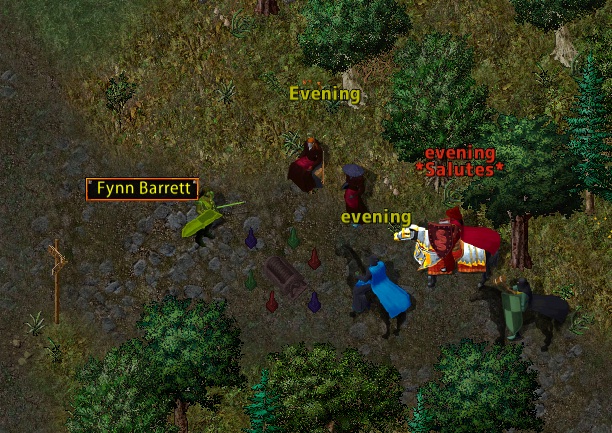 Sir Bolo mentioned to Fynn that there was a note just south of the odd device. We walked over and Fynn read the note. 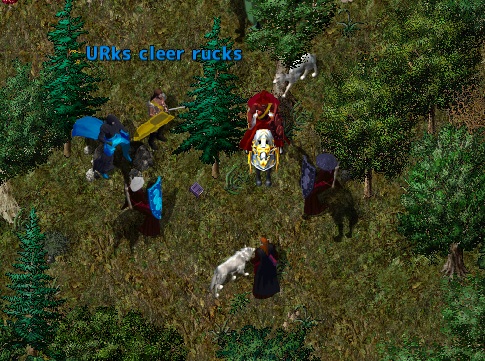 Lady Flame had taken copies of notes found in Mericles cave and placed them on the ground for Fynn and everyone else to read, Fynn seemed confused by the Orcish language and just as he was asking a question an Orc Gate Technician came down from the road. 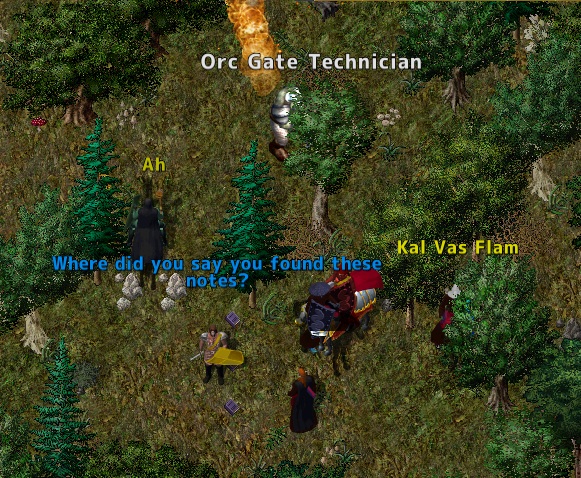 After the Orc had been killed we rushed over to the device on the road, A moongate was now glowing. On further inspection it was an 'Orcish Moongate' and lead to the Orc camp just west of Cove. 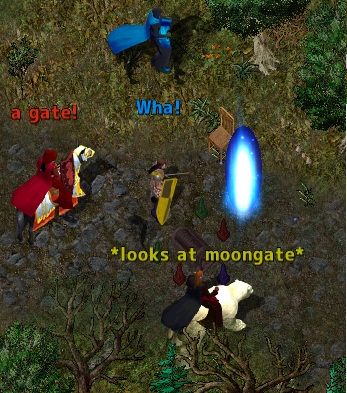 Suddenly the gate made a noise and a large collection or Orcs and Ettins appeared. The battle was on. 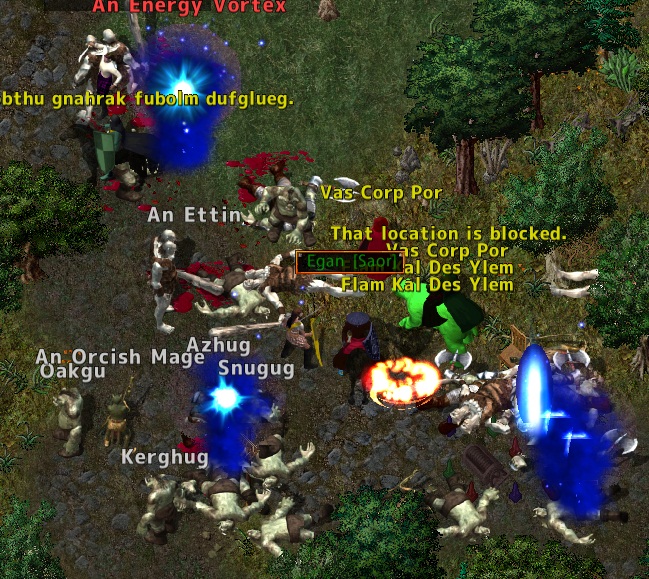 First came small orcs, then orcish mages and onto orc brutes. After a good 10 minutes they stopped coming from the moongate and we healed the wounded and gathered up near the gate.

We slowly went through the moongate and found an Orc Gate Commander and Orc Gate Guardians. 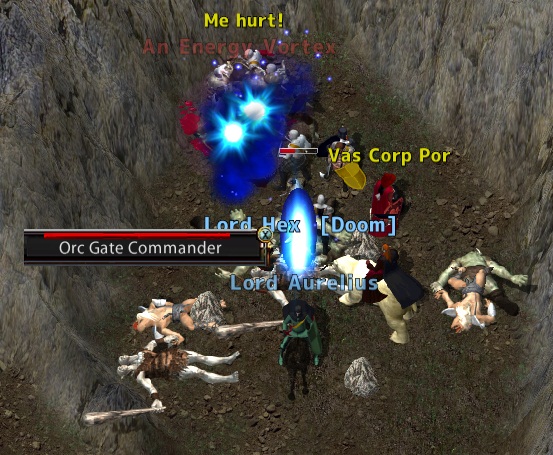 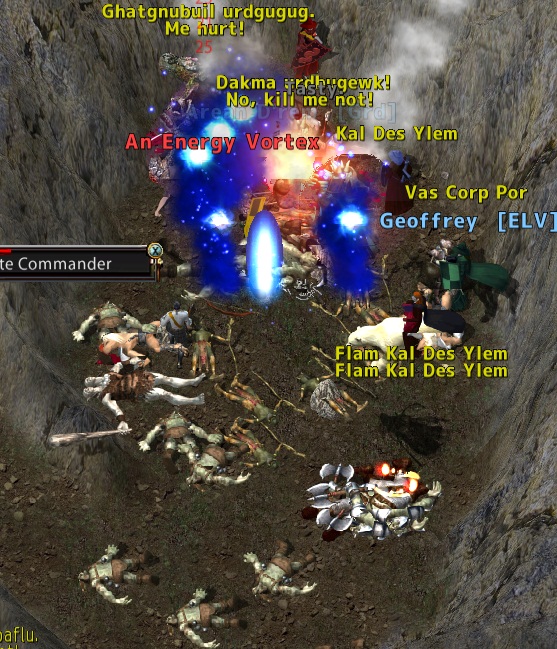 After the Orcs stopped coming to us at the mountain we went south, further into the camp. 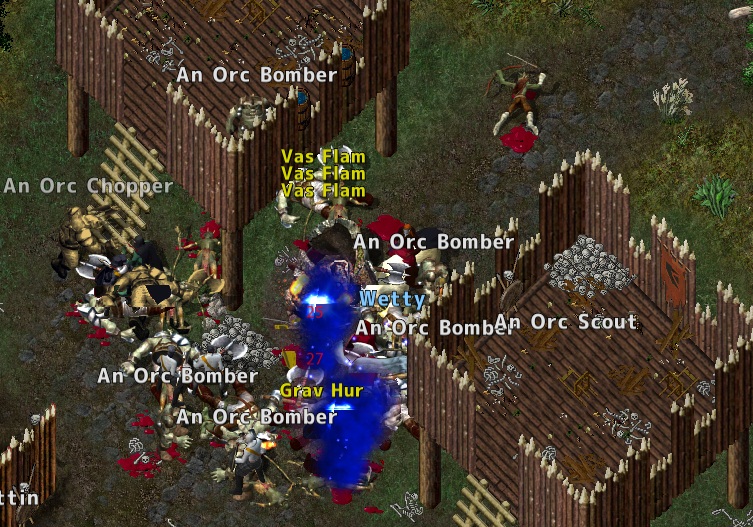 Finally, It appeared we had the Orcs killed. Inside one of the rooms we found a book titled 'Orders'. It had both an Orcish and English order. 'You must secure the release of Big Bob from Britannia Prison'.

A guardsmen from Yew stated Big Bob was held at the prison, We rushed over to the Yew Prison via the moongate the orcs had created. 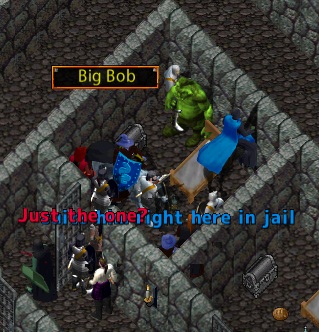 Big Bob spoke heavy Orcish and seemed to say the orcs would destroy our cities.

The Royal Guard Commander Fynn Barrett took his leave and told us to try question Big Bob further and if we found anything out to report it straight to him.
N

Nice. I keep checking on the EM site to see if there was anything and nothing. So i missed this one.
C

yeah, I'm not normally one to moan but
MOAN.
A

Stratics Veteran
Stratics Legend
We still seem not to have got all the information we can out of Bob, as far as I'm aware. I know some folks were doing well getting reactions to words (especially Hex, who I noticed seemed to be on to a useful line of responses), but since my journal didn't save properly I have no record of what did or didn't work

Anyone building a list of information gained from Big Bob?
F

Stratics Veteran
Stratics Legend
I am also rying to remember why Big Bob is in Yew prison, I can remember hes there due to an EM event, but nothing more springs to mind about him. Can anyone remember anything at all about Big Bob?
S

I think we should wonder who is giving these orders. "A well written hand" points to someone not orcish, maybe a noble, scribe or scholar?

Stratics Veteran
Stratics Legend
Yeah... I'm afraid I must admit this did annoy me a little too!

I saw both Flame and Mapper's posts in good time for the event. (Thanks both!)

So I headed to Yew about 7:55 last night. Ran around randomly, checked out the bank/abbey/town centre, but could find nothing and nobody.
Then I checked the councillor's in Britain, and the Event Crier. Nothing.

So I checked the EM Website - lo and behold, nothing there!

So, methinks, perhaps this is actually an RP event - where a new Orc guild is planning to attack GRD? (Or something like that!) So I give up. rolleyes:

Perhaps if it had been on the EM site as well, I would have asked about a bit more as to where it was!!

Stratics Veteran
Stratics Legend
I also went to Yew at 7:55 and wandered around until 8:10 and couldn't find anyone or the event

Stratics Veteran
Stratics Legend
Well I saw the posts on this forum and remembering where the orcs invaded last time (Stonekeep) I went there and sure enough the strange gatemaker was just below it and the invasion started there. Must admit it was a bit hit and miss tho.
F

Stratics Veteran
Stratics Legend
sorry to hear so many had problems finding the start location, was a little bit of not reporting enough on here that made it worse I think, that I feel a guilty about. I visited Mericles lab 30 mins before start of the event and noticed a book in there that in said they were going to bash stonekeep, or worse to that effect. I should have thought to have posted it sorry, I hope to do better in the future.
A

Stratics Veteran
Stratics Legend
Nothing at all to blame yourself for Flame!

I found the start of the 'orc invasion event' by a reasonable guess, since the device discovered earlier in the week was likely to be a gate-maker of some sort ("The young boy looked hesitantly at the strange objects on the road. ..... and gazed on wide-eyed as the blue glowing orc appeared and out stepped an Orc raiding party!) I thought that would be where things would kick off from.

Didn't think anyone would head anywhere else, so never thought to post anything pointing that out

If I had of thought about it a bit more (or loaded UOAM perhaps!!) I might have found it.

The only very minor issue I have is purely with the event not being on the EM site, esp. after the fiction appeared.

Of course that could be for all manner of reasons, technical hiccups etc. So please don't blame yourself in any way!
Show hidden low quality content
You must log in or register to reply here.
Share:
Reddit Pinterest Tumblr WhatsApp Email Link
Top