Stratics Veteran
Stratics Legend
Da sea is ours!
I heard that a couple o' pirates are found on the high seas, and since we do not want competitors we should hunt them down. My goal is to gather the rewards for an Orcish Galleon, which can be gotten as a reward from turning in those pirate captains. The prerequisite to defeat the pirates are cannons, since you have to fire them to make the enemy ship immobile before boarding.
Who's with me?
G

Aye b' wit ya.. perhaps I can use me new purple garg ship ta block dem.. har. Kane b' sayin it gives em nightmares when e' looks out es window, but me tinks dats from all dat rotgut ale e's been drinkin non-stop.
G

*ooc* on a side note. I've been putting in time mining ore for ships cannons and for Handsome Pete's tinkering habits. I'd like cannons made for my ship and than I'll just keep throwing ingots to pike to make more cannons for anyone who wants them. My mining is at 104 with my gloves on and on a side note, I've been mining up rare gems. What are these used for? Can they be sold? What are they worth? etc. Pike, I'll start putting commodity deeds in your mailbox for 2k each (just so you know they are from me). I'll assume that is okay unless I hear differently. I'll be on tonight mining more. Kane and I had a run in with an orc ship last night (funnier than hell)

I have tears in my eyes right now just telling and remembering it.. good stuff.

Stratics Veteran
Stratics Legend
Gonzo an' Kane, two grog-gargling flee-ridden swashbucklers, out on an adventure. AND I WAS NOT DERE TA SEE IT! *mutters*

I'll use yer commodities ta make ye some fine cannons. Will be done da next time we meet.

Also, I lack of Black Powder (which is made of salpeter), which I need ta fire cannons. Dunno how many shots are needed ta render an enemy vessel immobile. From wut I heard da alchemists selling salpeter can now be found at da docks all over Britannia, which may solve da shortage-problem.

I am all for reclaiming the sea in the name of the UP, but I will be "out-to-sea" the next few days so I will have to join in the fun next week.

Stratics Veteran
Stratics Legend
I've got heavy shot made for my ships.

Stratics Veteran
Stratics Legend
Last night we found and destroyed a pirate vessel. While the fighting was lots of fun, the preparations for such a fight are insane. I posted a detailed report here.

Stratics Veteran
Stratics Legend
I took out one ship and a second seemed like they were invulnerable, because after about 40 shots it showed absolutely no damage.
T

Stratics Veteran
Stratics Legend
Welll met mateys...I have put my old sealegs back to use.
But have found them pirates and oddmerchant ships a tad hard..

I take more damage then them...and seem to do little to there ships..
I may need to kidnap ...i meed hire meself a few more then 3 sailors for thees trips to sea..

But would like some info on taking the pirates down..
Like tactics and if or what the npc sailors can be used for..

T-Hunt said:
Welll met mateys...I have put my old sealegs back to use.
But have found them pirates and oddmerchant ships a tad hard..

I take more damage then them...and seem to do little to there ships..
I may need to kidnap ...i meed hire meself a few more then 3 sailors for thees trips to sea..

But would like some info on taking the pirates down..
Like tactics and if or what the npc sailors can be used for..

What is yer name matey? And welcome back!
Before ye start, ye should get a pole from the quest giver at the Sea Market. Because arresting the pirate captain instead of slaying him yields much better rewards.

We once defeated and plundered such a pirate vessel. Ye should have at least a crew of 3, and lots of ammunition. Ye have to fire the cannons as fast as possible to damage their ship so it becomes immobile. At da same time ye have t slaughter da crew. Once da boat is immobile (it took us roundabout 40-50 shots, but this seems to vary), ye can board it and attack the captain and arrest him as soon as his health is low. Make sure ye have enough resources on board ta repair yer own vessel, cause it will be damaged during the fight. Ours was unable to move even. Details here.
C

I would like to send some cadets to sail with the pirates so they get first hand experience from the best sailors.

Can that be done?

Stratics Veteran
Stratics Legend
Pirates do not train pirate hunters, that is all.

Scarst said:
Pirates do not train pirate hunters, that is all.
Click to expand...

I was just going to say... since when does training for Cadets fall to outsiders? rolleyes:

With the next patch (now on Origin), if the pirate crew is dead, they stop firing.

That means that once you kill the crew and scuttle their ship, you need to move your ship to the aft side of the pirate ship to launch your raiding party. This way, they can't fire on you any more, and you save a ton of damage.

Also, and this is from here-say rather than actual experience, I've heard that a hit-and-run tactic works very well against the pirates. That is, approach, launch a single broadside, and move out of range to reload. I imagine that with an effective crew, this would be less productive than hit-and-keep hitting, but for a crew of 1-2 people, it could come in handy.

When I get my next shipment of ammunition in, I would like to test that (among another tactic which will remain a secret for now).

I may be on for an hour or so tonight (50/50 chance), otherwise those tests will have to wait until the weekend.
T

Stratics Veteran
Stratics Legend
I've not done a ton of the pirate hunting either but one thing I have noticed that will help you reduce damage is that they usually have two cannons on one side and only one on the other. If you approach from the side that only has one cannon you can half the damage they do to you.

Stratics Veteran
Stratics Legend
I have been with parties that captured a couple dozen pirates now and I have some advice. You might try sneaking up behind them. Keep firing your bow cannon and make sure they are in front of it. There are no rear firing cannons. Also the hit and run tactic does work. It is my belief that cannonballs disable their ship so you can board. Grapeshot, as in real life, harms the crew, but does less damage to the ship structure.

Having only so many shots before your own ship becomes disabled in the fight means wisely choosing what to load the cannon with. Make sure gunners each have the needed items for cleaning, loading, fusing and a match to light the fuse. Whichever gunner has the pirate before their gun fires and immediately prepares the gun to fire again, or casts some area effect spell if possible at the pirate crew, or fires arrows.

Do not bother to target the main pirate until you get aboard or you will be wasting your time. Even Energy Vortexes, armor piercing weapons, AND a Greater Dragon take a long time to subdue or kill the ‘reward' pirate. Also we don’t check anymore for the useful pirate names before we hunt. It seems that any pirate qualifies for a reward.

There is an interesting technique I discovered, using a rowboat. In just the right way you can place something that floats. like an empty potion bottle, on the edge of a rowboat and row away from it. The bottle remains afloat and you can block a pirate ship, or any ship, in place, if you live long enough. Send the rowboat in (preferably with a stealther so the pirates see no one to shoot at), and row to the pirate. Place something in the water to block their movement. then move in with your war ship. You can remain in the rowboat and cast spells or shoot the pirate crew, or return to your warship for the battle. This is tedious and only half worth the effort, but can prevent the pirate, or anyone else, from moving their ship for 2 hours, and there seems to be no way to remove the blockading item from the water.

You might bring a pack animal to haul away the pirates tons of food and metal ore and so forth after the battle.

You need to be partied and present with the quest giver at the seaport at the same time to share in the reward. The ship that carries the pirate must also be at the seaport as far I can tell. That ship’s owner does not need to be involved.

Stratics Veteran
Stratics Legend
Grapeshot does damage the pirate ship enough to board.

Stratics Veteran
Stratics Legend
I have a question... anyone try Ship vs. Ship battles in Trammel yet between WARRING guilds?

Stratics Veteran
Stratics Legend
Not on Catskills. They're doing such battles on Europa, but I didn't join one yet as I am busy transfering. When I know more, I will publish. However, the information on the UP site should in theory be correct.

Stratics Veteran
Stratics Legend
So they have had wars between ships owned by warring guilds on Trammel in Europa? Can you confirm that for me? I may want to run a battle plot on this.

Stratics Veteran
Stratics Legend
Can we somehow test this ourselves? Who volunteers? *raises hand*
T

Stratics Veteran
Stratics Legend
I've volunteered to help test this several times already, all you have to do is get ahold of me. 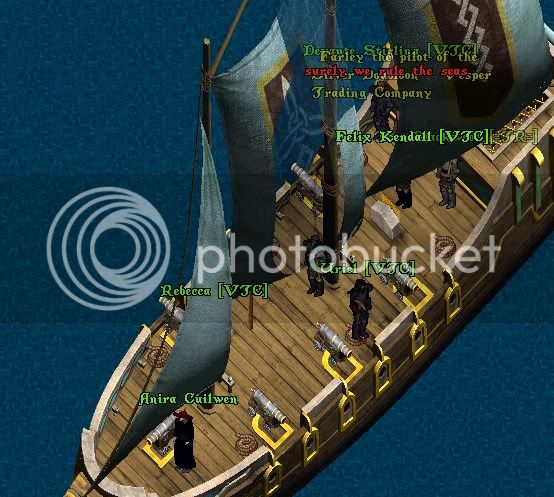 And that wasn't the most people we had out pirating that night!

On Wed night, there were even more people.

Tonight, they're doing the great PvP event. All your answers can be answered tomorrow. But not by me (It's singing night for me. No UO until after the event is done)

Stratics Veteran
Stratics Legend
We had ten the other night and Nine today on our ship alone.

Stratics Veteran
Stratics Legend
And the answer to the question is yes, you can scuttle the orange's ships.

I don't think that scuttling leads to being able to board the ship, so extra rules should be thought of about that.

But ship-to-ship combat is possible.

Stratics Veteran
Stratics Legend
It works exactly as described on the UP Naval Warfare guide.

The shots do the same damage, regardless of range (up to and including 6 tiles).

The shots only do damage in a straight line, plus one tile to either side of the line of fire.

I hope to conduct some exercises in the near future, but the time will be "if I happen to be there"... Trinsac and Shini are also required for my training (Shini because she's the best navigator, Trinsac for having the most experience out of the active crew). Everyone else, find those two, tag along for the ride and learn something!
D

i need help hunting pirates for quest is there a strategy where you can do it alone or do you need a crew?
Show hidden low quality content
You must log in or register to reply here.
Share:
Reddit Pinterest Tumblr WhatsApp Email Link
Top