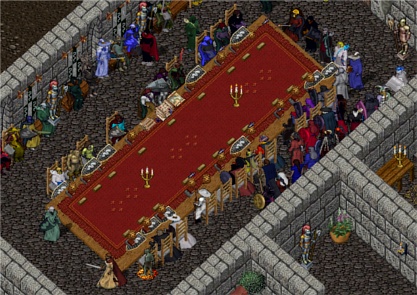 
The Crown Address
​
Tavalia Zodok - "Delegates of Her Majesty's Summit Table. We have sat for months at this table. many of you granted Asylum under the diplomatic relations as recognized by Her Majesty. It is by virtue of mine office that I speak for the Crown. I am the voice of Her Majesty's government, but a voice can only go so far. Here now, Her Royal Grace, Queen of Her Realms. The Sovereign of Britannia Her Majesty Queen Dawn."

Most of the townships stood up as Queen Dawn was announced to the summit table. Queen Dawn demanded the attention of everyone as she entered the room. Dressed in magnificent armor, complete with Dupre's shield and a Royal purple cloak.You could feel the power and anger in every step she took towards Tavalia Zodok. The Queen sheathed her sword loudly, as she passed by the Citadel of the Fallen. With a tired but determined look she scanned the table, taking note of each representative in attendance.

Queen Dawn - "Delegates. Please take your seats. I imagine you all wonder why I'm here. I hope you don't have the wrong idea. I hope you don't think it's because you're special or you deserve me to be here. I hope you don't think I'm here to give you anything special... I am here because I have heard and been witness to the things you have all said. The things you have all done. And frankly, I'm disappointed. I've heard your snide remarks to Lady Zodok. I've heard your snarky comments. Your insults you thought were whispered quietly. Your contempt for this very summit....This summit at which we grant and offer you protection and structure building. And you all have the gall to claim neutrality while you insult my ambassador. You have the unmitigated nerve to declare yourselves neutral while insulting the crown. When we first fought alongside one another against the Jukan threats. When we were faced with the crimson dragons, we banded together as one! And now that we have at least some measure of peace in these lands, some small... iota of that which we've strived for, you all have devolved into bickering like children. There is a point to debate and argument.There is not a point to name calling and finger pointing. If you want to act like children, you can be treated that way as well. If you want to be treated like the adults and responsible people you all should be...Then you will be held responsible for your actions. Just as you will be tonight. Most of you have commented on those purple bags. They are here for a purpose. An important one. Inside are two items. A dagger, and a shield. One is to symbolize your allegiance to us....The other to symbolize your aggressive stance. Choose one. The shields of order represent your commitments to the laws and government here. The daggers will represent your opposition and aggression."

Allegiance to The Crown

Aggressive to The Crown

Heated discussions with the Queen-

Queen Dawn went around the table asking each township their stance. While this was being done the room erupted with comments about Lord Dupre, towns being made an example of, Scarlet Von Trinsic being more powerful, If towns are unwelcome at this table let them know now, not even the loyal followers have gotten your help, Queen. Some of the louder arguments came from The Citadel of the Fallen and Aryslan City.

Queen Dawn and the Citadel of the Fallen representative exchanged words. Citadel representative, "Poor choice of shield. As Dupre was ever a symbol of Order" The Citadel spoke about Dupre running the True Brits and that Queen Dawn was the last one to see Lord Dupre. The Queen responded, "Lord Dupre was a man of unmitigated Honor, and a close personal friend of mine". 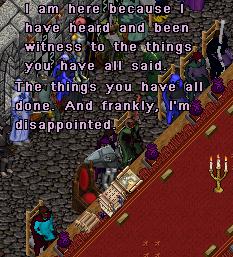 ​
Another argument erupted between the Queen and Aryslan about the Mazrim threat at the Tower of Souls. The argument became confusing once Jamlyn, Emperor of Aryslan said, "We will see it that he returns to Sosaria, at any cost." Queen Dawn and Tavalia seemed confused, they spoke to each other before Queen Dawn responded. "So you want us to recognize someone as a threat...and in the same breath....You express your intent to return this person to existence?" Jamlyn went on to speak about the power that is within the Well of Souls, on the Tower of Souls roof. and its destructive force can be seen at the Aryslan tower ruins. The room silenced for a few moments after Queen Dawns response. 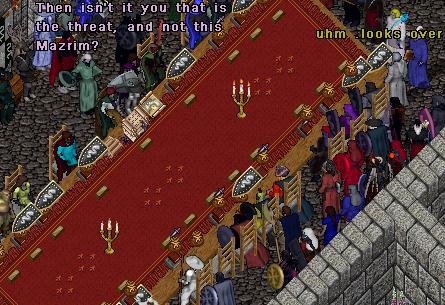 Queen Dawn -"You express your intent to return this person to existence? Then isn't it you that is the threat, and not this Mazrim?"

After a few more rounds in the Summit Thunder Dome. I mean the Summit Chambers, Queen Dawn had one last thing to say to everyone in the chambers.

Queen Dawn - "I no longer care to hear your words. When any of you have requested help...It has been given without hesitation. When you ask for costly and time consuming banner constructions, they are done without complaint. Lady Zodok has borne your insults week after week. These things have not gone unnoticed. I hope that those of you who have trod down a dark path realize the danger there. And turn back and join us in establishing something lasting."

As the Queen made her way out of the room she stopped next to Nastia Cross and looked down at Lox with anger.

Queen Dawn - "Don't you ever, EVER presume to talk to ME about Lord Dupre. He is a dear, close, personal friend of mine, and I will NOT hear your slander. I do not owe you anything. And if you knew Lord Dupre at all...You'd realize that he does not require or collect debts. And I have repaid him as much as I am able."

Queen Dawn made a dramatic exit with her purple cloak swirling about her. Lady Tavalia Zodok retook charge of the meeting informing the delegates that their stances have been made clear. Each township is still welcome to sit at the table and change their stance at anytime. As long as respect is maintained those attending the summit will be given Diplomatic Immunity. Tavalia opened the floor to any who had business to bring before the table.

Citadel of the Fallen- Requests to be included in the Township Teleport Hub. With no objections, Tavalia sent recommendation to Andrea Kildare at the Royal Surveyors Office.

Action- Pointed out the rude comments coming from those in the visitor section. Tavalia reminded them to be respectful or she would close the hall of visitors.

Merxmere- Requests to be included in the Township Teleport Hub. With no objections, Tavalia sent recommendation to Andrea Kildare at the Royal Surveyors Office.

Dragons Watch- Requests for Nidaros to be reseated at the table. Tavalia ordered a census to be taken of the town.

Gyldenfeld- Informed the Queen that their town, and Nidaros is in the process of working out borders peacefully.

PaxOku - Informed the crown about the ongoing water supply issues, and dead fish in the castle moat. 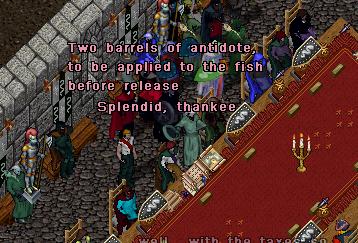 Tavalia Zodok specifically addressed this water supply and moat situation. The following orders and advisory are now in affect.


Once Tavalia finished with the orders and advisory list, a man approached her with a delivery slip. Tavalia informed the summit that Three Tons of new spawn fish. Two barrels of antidote, to be applied to the fish before release, have been delivered from the Vesper Fishery. She thanked the man and he left to go release the fish into the moat.

Before the township would embark on the next Livery Quest, Lady Tavalia took pleasure in informing the summit about the poisoned moat investigation.

"Lord Balandar is busy analyzing the poison from the fish in the moat. Preliminary reports suggest reagents harvest from the Tokuno Islands. As more information is released. Arrests will be made."

Just before the summit adjourned, Intendant Manshoon of Kijustsu Anei Village quickly blamed PaxOku. Rather interesting that they would point the finger so quickly at a township with a order shield laying in front of them. 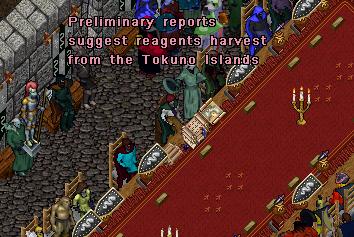