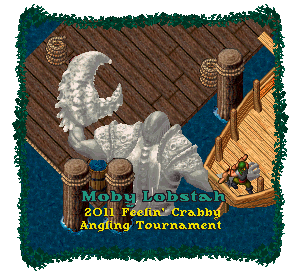 ​
The crew of the SKS Star, sponsored by the township of Kijustsu Anei Village has something to be proud of for years and years to come. Through the power of teamwork and months and months of dedication they have swept every category in the Sons of the Sea, 2011 Feelin' Crabby Tournament!!!

Now we get to da moment ye be waitin' for! Ahem! Ahem! We start with Vessel achievements. Amassing a total of 11,617 total crustaceans Dat be crabs and lobstahs, Da award goes to The SKS Star!

Santiago went on to announce the Individual achievements in the following categories.
-Most Caught Crustaceans
-Most Named Catches By Individual
-Heaviest Crab Caught
-Heaviest Lobster Caught

Sweeping all four categories was Captain Orin of the SKS Star and in a very close second for Heaviest Crab Caught was SKS Star Deck Boss Bishop from the Empire of Valor guild!

In recognition of dees many achievements. Da Son's o' Da Sea is 'onored to dub Orin da Champion o' dis tournament!"
​
Santiago embroidered the back of Orin's hat recognizing the accomplishment. To assist with the embroidering was none other then the mischievous and more diabolically ebil goddess in the history of world Hot Pi... *cough* err Proverbial Goddess of Death Mesanna! The SKS Crew was thrilled to see her once again after their encounter with her on the Seas during one of the tournament windows, where they plotted the downfall of the Noble and innocent Gareth. 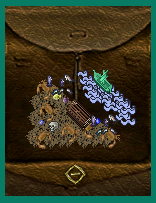 The crew of the SKS Star presented Santiago with a gift of appreciation in the form of backpack art depicting the SKS Santiago [Sons of the Sea, Trinsic] crabbing on the high seas which was put together by Calixtula, a statue engraved “Santiago may have Crabs but we still Lobs him” and a chest engraved Santiagos Chest, 2011 Crabbin tournament.

Santiago sent a message for us to pass along to the Crew of the SKS Star "Crew names will be added to ships in the Sons of the Seao Also, Crabbin' Club sashes are doable for the winning ship. I have the Crew, let them know to see me at some point and I'll get them for them" 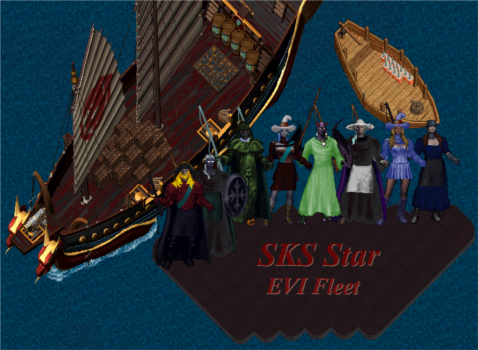 The crew of the SKS Star would also like to say a few words and sing a song for those who are baffled by their ability to have five crabbers going on one vessel with such high catch results. First for high results just remember this, there is no difference between a full lobster trap and an empty lobster trap, just a little assistance with the same type will empty a full trap and place an empty trap Also running crabbing drills improves your speed and accuracy...just ask Bishop!