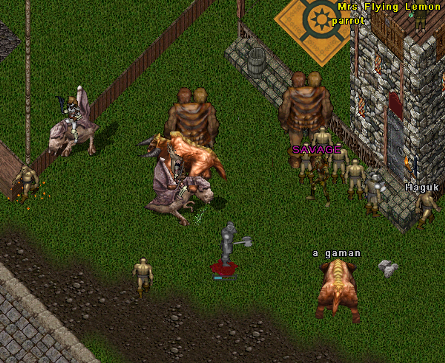 After defeating the Orcish Armada off the coast of Homare-Jima a few nights ago. The inhabitants and patrol guards were given a well-deserved break to celebrate their latest victory and enjoy all the wonderful spoils the Island had to offer.

With Lemony drinks in hand many enjoyed gambling away their weekly pay on a good Cat fight, while some of our more extreme thrill seekers gambled with their very lives for a chance to prove their great Ninjutsu skills by stealthing into Niva’s Hunting Lodge undetected and swiping a jar of her tribes paint….but they weren’t the only ones moving about the area undetected….

…behind the valorite ore rich mountains North-West of the Village, Orcish transport vessels had just completed their final drop. Only a few Patrol Guards remained on duty to escort Gareth the Mage and Janitor Pooper to the Temporary Guard Headquarters located inside the Dead CaT Clock Tower.

Ozog Giantfart was the first to sight the foul looking creatures near the Shrine of Lemony freshness. He quickly ran towards them and stopped a few feet away taking up a defensive stance which resulted in the Orcs quickly covering their mouths as they began laughing at the short and tiny weak Goblin. He may be short and his body may be tiny but he has the biggest stones around and used them to triple his size before laying waste to the small scouting party.

Meanwhile “HA-OOH! HA-OOH! HA-OOH!” echoed through the alleyways of the village as SKS and PITS Transport pack animals emerged from the Homare-Jima Moongate, lead by Gareth the Mage. Village Defense Leader Niva the Savage and her assistant Sinthe were charged with protection…even Gareths. The Orcs wasted no time and ambushed the group and forcing them to flee down the Lost Souls road. The Orcs had planned their ambushing locations well, forcing Gareth to take refuge in the Shrine of Lemony Freshness to keep the animals safe.

Retreat orders were given by the Orc Scout Captain as Lady Mourning Star slaughtered 70 Orc Scouts with only a few strikes and is to be awarded one of Kijustsu Anei Villages highest Medal of Heroism. The Patrol Guard will be continuing to protect the town and instigate the Orcish matter further.
Show hidden low quality content
You must log in or register to reply here.
Share:
Reddit Pinterest Tumblr WhatsApp Email Link
Top