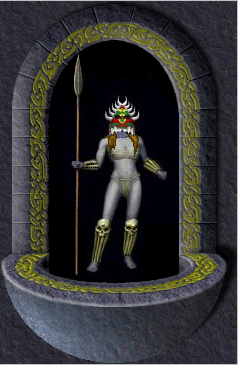 While interviewing various Monks about the I noticed small glass fragments in the woods near the Silent Rose Library. Assuming they could be from the Mysterious Savage’s vials I collected a few fragments. After I placed them in my pouch for safe keeping I made my way to the second floor of the Silent Rose Library hoping some fragments might remain inside from where the savage slammed one of the two vials to the ground.

I was in luck and quickly gathered them placing them in my in my secondary pouch. The only place I could think to have them examined was the Britannia Mage Tower which appears to be locked down tighter then Commander Drake Foxx’s liquor cabinet and Captain Gwen Irina’s sense of humor.

Lucky for me I remembered the old password and was allowed access. I laid the glass fragments out on a table for the Tower alchemist to examine. With the use of gargoyle lenses he was able to find some of the contents of the vials dried on the glass.

After waiting around I became bored and noticed a dartboard on the wall. I decided to throw darts to the pass the time, I may need to practice a bit more because I kept hitting the left eye of the Niva painting that was nailed on it.

Another hour or so passed and finally the alchemist returned with some best guest information. He informed me one of the two vials did not contain the same substances as the other and what he believes was inside one of them is extremely rare and almost impossible to brew. Only someone with great resources and power would be able to create or obtain it.

Vaslor Flash Vial – When shaken and slammed to the ground, creates a massive blinding flash of light allowing enough time for escape.

A simple Savage wouldn’t know how to brew or obtain this item which leads us to the conclusion that she is working with someone or is the mastermind behind everything in disguise.

Why is this Savage creating tension between the Savage tribe in the village and the Monks? We need to find these things out quickly before we are blinded sided once again and before the entire Homare-Jima Island is plummeted into Chaos with a Savage and Monk war.
Show hidden low quality content
You must log in or register to reply here.
Share:
Reddit Pinterest Tumblr WhatsApp Email Link
Top