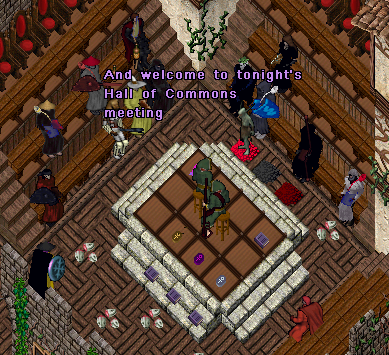 On Saturday, September 17th at 9pm ET we have "Liquor Lovers"

This will be an escort style event to deliver the craft liquors to points throughout the realm. There are one of three roles you may participate in during this event.

Depending on what path you choose you will bring the item that you will collect to the respective RPC for that group. Drake Foxx for guards, Scarlet for Thieves, Kendrick Morrow for Marauders. A Full Post detailing how this works will be posted on the forums. The other two events this month include

"Risen from Sail and Timber" Friday, September 23rd at 8pm ET
"Where No Olmec would go...." Saturday, September 24th at 9pm ET
More information will be available on those events as we near the dates.

Open Floor Discussion
​
Ashlynn- Will Risen From Sail and Timber be a Naval event, and do you intend to do any Naval events similar to the old one where we attacked that big fleet and are undersea caves involved?

Elder EM Dudley- No, Yes, not undersea ones....Something Naval with the New High Seas stuff is on the radar. Likely one or two months out though. There's a nasty bug involving EMs and boats so before that gets squashed we try to keep clear of them.

Ozog Giantfart- ANNOUNCEMENT ifin yoos habe not seen postys. SHE auctions are closed Zelda cannot sit for more than 10 mins. Rivi has med problems too and internet problems wif her provider dats all.

Zanku- I also have an announcement, ever Tuesday this month starting at 9pm Nidaros is celebrating the 1year Anniversary of its rising from the ashes. Last week we had a rune hunt, this Tuesday we have a CLASSIC ship Blood Regatta then following 2weeks after that will be an Archery and Horse Race with a big celebration afterward. Would like all to come! Ties and such are posted on Stratics any question,s etc can be left in the Mailbox at the Town hall Thank you

​
Elder EM Dudley- If there's nothing further I'll introduce a topic that we'd like to get some feedback on. If you would like to submit feedback please email us. We are looking at expanding the offerings to player townships. In terms of special structures and the like, similar to the stables that were built. What we are looking for are suggestions of what you'd like the way these will be handled/implemented will be through various NPC guilds that exist. If you've been around for awhile you may remember joining an NPC guild to get discounts. Most everyone joined the mage one for discounted regs but those types of organizations will grant the reward.
Show hidden low quality content
You must log in or register to reply here.
Share:
Reddit Pinterest Tumblr WhatsApp Email Link
Top