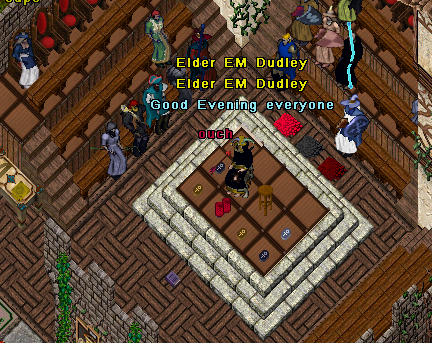 Township Construction- (but I followed the Blueprint!)
I have what I believe to be all of the build requests for Mesanna finally complied. You should see them pop up this week.

August EM Event Schedule- (It's where you want to be)
Our Fall Schedule of events for August will be available on Tuesday. You can check it on Stratics or on UO's Facebook page.

Healers's Guild Admission- (The Healer will be with you shortly)
Kerrs Holley of Port Baldmore presented 50 cures for his township to EM Dudley for a Healers Hut to be constructed on the Island.


Kerrs Holley- Aye, first I would like to thank everyone who made it out to our Tavern Night out at Sea Cruise. T'was fun to toss some nets with yee folks. Next Sunday we will have a special event planned for all of you so please try to come at 7pm EST to the Soggy Barnacle on Port Baldmor.​
​
Kerrs Holley- Who do I email if I want an EM to be a Barkeeper at our Tavern Night?​
Elder EM Dudley- You can send a message to Dross. Not sure what Symmera's availability is now, though, since she is a wanted assassin​
​
Ashlynn- The Hall of Victory in Malas doesn't seem to get updated or mention much lately but I always thought it was a good way of recognizing what people do.​
Elder EM Dudley- Just a matter of finding the time for it.​
​
Ashlynn- Any major naval event in the works? You sorta did it with the big fleet near Jhelom and the undersea dungeon so I keep wanting to know.​
Elder EM Dudley- Maaaaaybbbeeee​
​
​
​
Last edited: Jul 29, 2012

Alumni
Stratics Veteran
Stratics Legend
Wiki Moderator
Sorry for the worst picture resizing ever it wasn't intentional. Was a very long nite/day/evening and I wasn't paying attention when I re-sized the Canvas. I forgot to drag the picture down so it cut out the bottom and not the top.
Show hidden low quality content
You must log in or register to reply here.
Share:
Reddit Pinterest Tumblr WhatsApp Email Link
Top