Alumni
Stratics Veteran
Stratics Legend
Hey all you NW fans. Came across this on mmorpg with a nice sneak peak video.

Cryptic Studios has teamed up with MMORPG.com to bring our readers a first look at the Neverwinter Icespire Peak zone of the game. Read up on the lore and check out our exclusive video.


In the shadow of Icespire Peak, the Icehammer dwarves wage a wintry battle.

Snow-laden crags and hard-edged bluffs loom over Torunedar like frostbitten fingers. Despite the subzero temperatures, the dwarven village is bustling with activity, constantly preparing for an ongoing battle that is as sure as the promise of a cold dawn. Bolbin Ironbrow can be found coordinating the meager Icehammer militia as Garora Oakhew tends to the wounded and holds the front line. In the White Crags, the blistering waste high atop Icespire Peak, Florin Icehammer, last scion of an ancient line, seeks a way to bring the fight to Hrimnir himself.

The frost giant chief will not be dissuaded so easily.

Hrimnir, favored of the winter titan Thrym, commands the bitter forces of winter on Icespire Peak, sending wave after wave of frost goblins, winter wolves, ice trolls, and frost giants at the Icehammer dwarves. Icespire Peak has become the stage for confrontation between Hrimnir’s army and the resilient dwarves, and a place for stalwart adventurers to ply their trade in battle.


The colossal giant Lakkar, long frozen in stone and ice, stares uncaringly down at the battlefield. In times past, Lakkar made a pact with Thrym for the dark power of Elemental Chaos. The giant received the Winterforge, an ancient artifact which rewarded him with colossal size, but proved too powerful for him to contain. Defeated by the Icehammer dwarves, Lakkar and the Winterforge lay untouched for generations, until the artifact was disturbed by the stout folk and began calling Hrimnir and his forces with the Elemental Chaos. 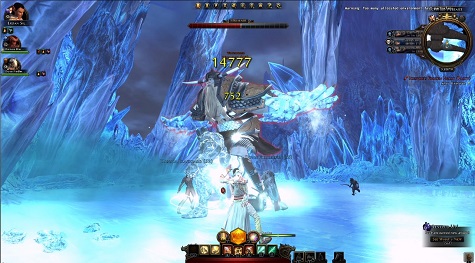 ​
​
The dwarves may be hardy, but they cannot attack Hrimnir alone. Adventurers who find themselves in the freezing climes around Torunedar will battle through the Frozen Heart, into the very body of Lakkar himself, to find and destroy the Winterforge. Giants, tolls, golems, and the frost giant chief himself stand between them and the salvation of Icespire Peak.
Click to expand...