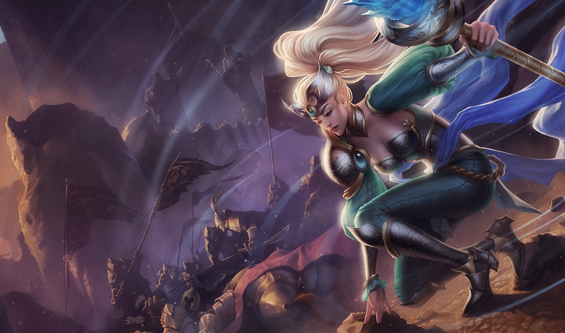 With Season Two coming to an end on November 6, we want to recognize and honor all the players who courageously carried, stunned, ganked, and healed their way to Ranked plays upper echelons. All players who completed Season Two in the Bronze tier and above will earn special rewards.

Even better, those who hold a rank of Gold or higher will receive an exclusive skin befitting their status as a battle-tested summoner: Victorious Janna. Far from a passive support, Victorious Janna arrives at the Demacian front lines bedecked in battle-ready plate armor, wielding a crystalline torch to burn through the fog of war.

Victorious Janna will join worthy summoners lineups on November 6, along with other great rewards for those who persevered throughout Season Two. Check out this post for more information on each tiers rewards.

Also of note is the soft Elo reset to Twisted Treeline and Summoners Rift on November 6. This new date is better in line with the arrival date of new Season 3 content, and gives summoners more time to compete on the Fields on Justice to wrap up Season 2.

You will begin the new season unranked, with your initial seeding based on a compressed version of your final rating from Season 2. In addition, the systems confidence in your rating will be reset, so large Elo gains will be possible even if youre an extremely experienced player. More details will be released as we come closer to the start of the season.

Furthermore, we are continuing to stringently investigate and punish ELO boosters.