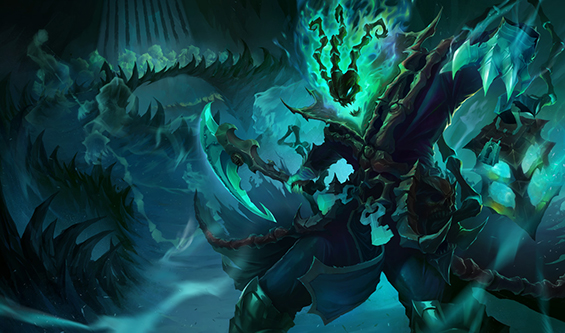 The newest support champion to join the League is Thresh, the Chain Warden. This gruesome specter wields wicked, articulated chains, and specializes in harassing and disrupting opposing teams. His collection of crowd control effects thwarts enemy plans, while harvesting souls allows Thresh to grow in power.

In game, Thresh is a support that thrives on communication and cooperation. He controls fights by displacing enemies and repositioning allies.

During the laning phase, Thresh uses the range of his basic attack to terrorize opposing champions with his Death Sentence passive. He shields his lane partner with Dark Passage and  with well-executed positioning  offers them the unique benefit of the lanterns escape potential. Flays versatility lets Thresh push enemies into range for further harassment or swat them away to protect an ally.

In the mid game, the synergy between Threshs abilities shines. An opportune lantern can bring a teammate along for the ride when Thresh hooks an enemy with Death Sentence. Flay can chain into a mid-range Death Sentence to knock an opponent up and grab them out of the air. Thresh can put enemies in an even scarier situation by isolating them in The Box or can cast The Box and then drag or knock enemies into it to trigger the damage and massive slow from breaking its spectral walls.

Because Thresh scales through collecting souls for Damnation, an effective soul harvester will become a potent damage-soaking tank during the transition to late game. In team fights, Thresh frustrates enemy positioning with Flay and Death Sentence, while shielding allies with Dark Passage. The Box can inflict heavy burst damage and split enemy teams as they try to disengage.

Optimize Thresh by collecting souls and protecting your allies before wreaking havoc in team fights. Your opponents better listen carefully for the scraping sound of his encroaching chain, or it may be the last sound they hear!

As with any champion, Threshs abilities may change before release.

Lore:
Thresh is a twisted reaper whose hungry chains ensnare the souls of the living. A moment's hesitation at the sight of his ghostly visage and there is no escape. He leaves in his wake hollow corpses, their souls ripped loose and trapped in the sickly green light of his lantern. The Chain Warden takes sadistic joy in tormenting his victims, both before and after their deaths. His grim task is never complete, and he stalks the land for ever more resolute spirits to unravel.

Thresh carves careful, deliberate paths through Valoran. He handpicks his targets individually, devoting his full attention to each soul in turn. He isolates and toys with them, gradually eroding their sanity with his twisted, maddening humor. Once Thresh takes an interest in a soul, he does not relent until he possesses it. He then drags those he captures back to the Shadow Isles for an unimaginably dreadful fate. This is his only purpose.

Little is known about the Chain Warden's past, and many of the details live only in nursery rhymes and campfire tales. They tell of a sadistic jailer from centuries past who took great delight in torturing his wards. Patient and brutal, he used a variety of methods to break his victims' minds before their bodies succumbed to his grisly designs. Chains were the jailer's preferred instruments of terror. Their shrill scrape marked his dreadful approach and promised agony to those he visited. His dark reign went unchallenged until his prisoners escaped during a massive riot. They overwhelmed him, and without ceremony or remorse, hanged him from his own chains. Thus began the unlife of the horrible specter known as Thresh, or so the tales go.

Thresh now haunts the land, leaving an aftermath of horror and despair. However, there is a devious purpose behind his dark machinations, and the meager spirits of average men are insufficient. He seeks stronger souls. Only when he has broken the wills of Valoran's most resilient warriors will he finally have what he needs.

''There are few things as invigorating as taking a mind apart, piece by piece.''
-- Thresh