Quinn and Valor, Demacias Wings, will be swooping onto the Fields of Justice in the upcoming patch. The most comprehensive duo to grace League of Legends yet, Quinn and Valor work in tandem to punish their opponents through agile and precise attacks. 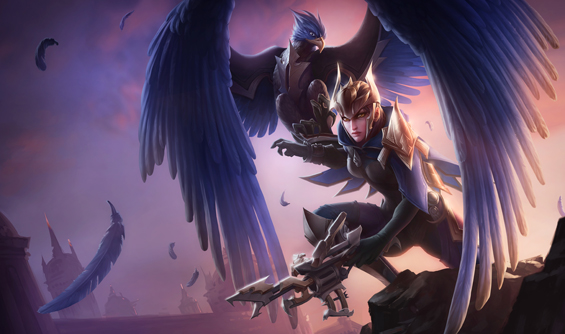 Quinn and Valors combined prowess makes them a highly mobile carry combo. During the laning stage, the passive effects from Harrier and Heightened Senses make Quinn an excellent last-hitter, and raises the chances of the duo securing kills against enemy champions. Quinn and Valor also enjoy a range of defensive abilities: Quinn can activate Heightened Senses to check for approaching junglers, while Vault ensures Quinn can easily maintain safe distance when enemies come in for the kill. If an opponent is still able to close in, the blind from Blinding Assault can briefly neutralize the enemy and allow for a hasty retreat.

Quinn and Valor are also highly capable when assisting friendly ganks. The slow from Vault makes their target susceptible to skillshots, and grants valuable time to secure a kill before your enemy can escape. The best Quinn and Valor players can even use smart positioning and timing with Vault to launch Quinn over terrain. Quinn and Valor also excel at chasing down fleeing enemies. Activating Heightened Senses gives vision across terrain and into brush, allowing the duo to close in on enemies attempting to juke. Meanwhile, the speed bonus from Tag Team helps Valor hunt down retreating prey before Quinn returns to Skystrike for the killing blow.

The nature of Quinn and Valors play changes fundamentally once you gain access to Tag Team. While still a disruptive ranged duo, Tag Team temporarily turns Valor into a melee monster, perfectly poised for pursuing wounded enemies and cleaning up team fights. As a lengthy buff, Tag Team affords Valor enough time to zip between lanes to defend or split push as needed. The long duration also means Valor can fully disengage from a team fight, reposition and heal up if needed, and re-enter the fight once the conditions are more favorable.

Quinn and Valor operate as an extremely powerful and mobile team, perfect for new players and veterans looking to carry in League of Legends!

Lore:
Quinn and Valor are an elite ranger team. With crossbow and claw, they undertake their nation's most dangerous missions deep within enemy territory, from swift reconnaissance to lethal strikes. The pairs unbreakable bond is deadly on the battlefield, leaving opponents blind and riddled with arrows long before they realize who they're fighting: not one, but two Demacian legends.

As a young girl, Quinn shared a hunger for adventure with her twin brother. They dreamed of becoming knights, but lived a quiet, humble life in the rural borderlands of Demacia. Together they imagined triumphant battles in faraway lands, seizing glory for their king and slaying foes in the name of Demacian justice. When daydreams alone could no longer satisfy their warriors souls, they embarked on daring wilderness adventures in search of true danger. One such quest turned to tragedy when a terrible accident claimed her brother's life. Overcome with grief, Quinn abandoned her dreams of knighthood.

On the anniversary of her loss, Quinn gathered the courage to return to the scene of the tragedy. To her surprise, she found a wounded Demacian eagle at the site of her brothers death  a rare and beautiful bird long believed extinct. Quinn nursed the fledgling back to health, and as they grew up together, a deep bond formed between the two. She saw the same quality in her newfound friend that had lived within her brother, and so she gave him the name "Valor." The pair found strength in each other, and together they pursued the dream she had once abandoned.

The Demacian army had never seen heroes like Quinn and Valor. Their deadly skills quickly set them apart from their rank-and-file peers, but many still had their doubts. How could a common-born girl, even with such a powerful creature at her side, forego years of military training? Quinn and Valor proved themselves on one critical mission, tracking down a Noxian assassin who had evaded an entire Demacian battalion. When they brought him to justice, they finally earned the admiration and respect of their nation. The two now serve as living, fighting icons of Demacian strength and perseverance. Together, Quinn and Valor will stand against any threat to their beloved home.

"Most soldiers only rely on their weapons. Few truly rely on each other." - Quinn

Head over to Reddit on February 21st at 10 AM PST for an AMA hosted by Quinns designers!