Stratics Veteran
In Season 3 were making some exciting renovations to ranked play. At the heart of the update is a new league system that provides more challenges for competitive players and a greater sense of progression for newcomers. Youll find an overview of how they work in the infographic below. You can also join us for the reddit AMA on Wednesday, 1/16 at 12:01 PM PST and ask your question live. 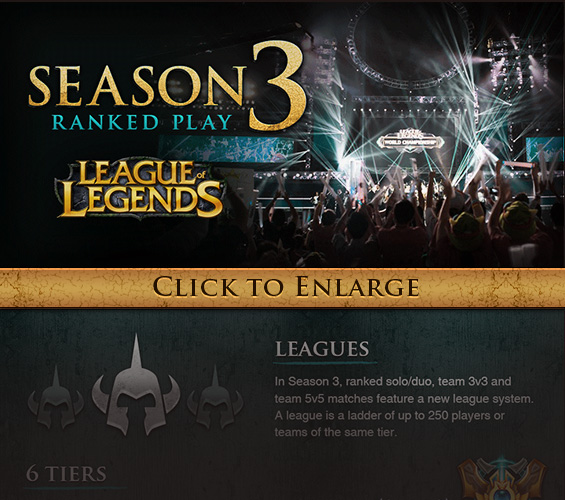 Winning ranked games earns you League Points that help you move up the rankings in your league. As you acquire more points youll have the opportunity to fight your way into the next division, or even into a new league at the next tier of competition. Each triumph brings on new challenges and tougher opponents, as well as rewards at the end of the season. Top 5v5 ranked teams that reach the Challenger tier even have the opportunity to go pro in Season 3.

Were looking forward to beginning a new era in competitive League of Legends and seeing who will rise to the Challenger tier. If you still have questions about leagues check out the following FAQ or leave us a comment on the forums.

Why are we creating a new league system?

We decided to move to the new league system for a few reasons. For starters, having a single ladder with all ranked players doesn't provide a lot of incentive for advancement. When youre ranked 290,000 and have 289,999 opponents left to pass on the way up, that process can seem meaningless and interminable. Tiers and divisions also provide milestones and manageable goals you can strive to achieve at your skill level. Through leagues we can move away from focusing on a single number as the core indicator of a players skill, and instead move toward something more compelling: competition on a small ladder with a relatable number of opponents.


What happens if I lose a ranked match in the league system?

Losing a ranked game in the league system will cost some of your League Points. If youre already at the bottom of your division, this may mean falling back to the previous division . Once youve earned a skill tier, however, you can never be demoted to the previous tier unless you stop playing for a prolonged period of time.

In other words, losing can never cause you to fall below 0 League Points in the lowest division of your league.


Once Im placed in a league, what happens to my Elo?

Our matchmaking system still matches you by skill level, but this rating is no longer visible and does not have any bearing on your seasonal rewards or ladder standing. Your standing in your league is now determined by your tier, division and League Points, not your matchmaking rating.


How does my ranked Elo determine my league placement?

If youve played at least five ranked team games or 10 solo/duo games in the preseason, a combination of your current and top Elo rating will determine the tier of the league you initially earn.


How will I be placed into a league if I didnt play ranked during the preseason?

If you havent played enough ranked matches in the preseason, youll first complete a series of placement matches before being sorted into a league. How you perform in these matches will determine the tier of the league you initially earn.


Will I only be matched against opponents in my league?

No. Matchmaking isnt affected by your league, and youll still be competing against all opponents of your skill level in the League of Legends community. Your league measures your progress against a set of opponents of similar skill level, but doesnt restrict competition solely to those players.


What if I want to see how I measure up against my friends?

The league system will always try to place you in a league with summoners on your friends list first, provided theyre in the same skill tier you are. If you want to check your ranking against a friend in another league, you can compare your tier, division, and league points to get a general idea of whose closer to the top.


Do I have to duo queue with summoners from my League?

No. In ranked solo/duo you can still queue with any summoner you choose, regardless of the tier, division, or league in which theyre placed.


Will I have the opportunity to go pro if I reach the top of the ranked 3v3 or solo/duo Challenger tier?

Although there are no League of Legends Championship Series events for 3v3 or solo/duo competitors, reaching the Challenger tier in these rankings will help you find other top notch summoners to play with. If youre interested in making a run at the Championship Series, try messaging some fellow Challenger tier competitors who arent attached to a current 5v5 ranked team. Youll probably find you have plenty of potential comrades to help you pursue your dream.


Can you walk me though an example of how the league system works?

Sure. For the sake of illustration, lets take the hypothetical (and non-existent) player Steve McQueen. Steve completes his placement matches and falls into division three of the Silver tier. Hes then placed into a league with up to 250 other Silver tier players. Based on their skill level, these players are evenly distributed across the five Silver tier divisions, so Steves league contains around 50 players in each division. When Steve acquires 100 League Points by winning ranked games, hell have the opportunity to play a Division Series to move up. If he were already in division one, hed get to play a Promotion Series to break into a new league in the Gold tier.