Introductions of the Crew... 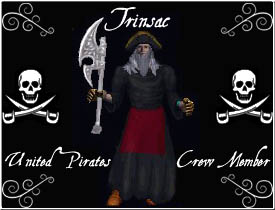 Introducing a pirate of some renown, who served with Captain Hawkeye Pike from the beginnings of the United Pirate crew. Since Captain Pike ans his first-mate Hook sailed from the Jolly Roger Inn, Red Skull Bay; ner to be heard from agin, *bows head*, God Bless he and his ship's crew.
Well, as myself was tellin' yas...the crew at Red Skull Bay chose Trin to be ther pirate captain. And know yee well, that rum drinkin' , wench chasen, ax swingin' scurg of the seas, be now the righful "Captain" of the United Pirate crew. He be feard by man and maden in all Britannia and all the Islands. so be yee introduced proper!
From humble beginnings he came to be a party to Pike's crew...
Trinsac joined the United Pirates in May 2008. The life of a pirate was a new experience to him. The more it is remarkable that he had become one of the central members of the crew. If you see some green seaweed entangled in his long grey beard, it probably means that he just had returned from one of his sailing trips. He always tries to make it to the events, and he is neither afraid of most dangerous monsters nor hordes of landlubbers. He was entrusted with the function of an Emissary, and that he did well and proper like, ans soon he was busy recruiting a few brave men and women,(no wenches here), of the sea, ta join him at da Jolly Roger Inn.
Beware salts, sailors and landlubbers alike, Trinsac be our Captain now, arrr.

Stratics Veteran
UNLEASHED
Greetings Old Salts and Landlubbers alike,
Tis my duty and my honor to welcome aboard a new recruit, "Sin Bad".
Now as it came about, as our United Pirate crew were out raidin' merchant ships, that we dispatched the crew of one prize Gargoyle merchant, out past our normal raidin' area off Nu' Jelome. As we were finishing up the lootin', Cold Steel brings us a some what dazed crew member we came to learn were named Renub. Seems he had been knocked - out by a cannon hit, on the cannon he was manning. He put up quite the struggle with Cold Steel. His disposition was that Captain Trinsic, asked for a party to be formed to assist this Gargoyle in walking da plank. As the crew walked him to da plank, Renub spun about as asked Captain Trin if he might join the pirate crew, saying, "I'm one good cannoneer!, you might could use me on your ship's crew?" Blind Tom, spoke up in his favor, saying "we might could use a good cannoneer mates. After some mullin' it over, all agreed. The crew calls him, "Sin Bad" the pirate, and he is winning our allegiance and respect. We do warmingly welcome this Gargoyle to our crew, har har.
Your's very truly, ~ Blind Tom the Pirate, First Mate [UP]​