Alumni
Stratics Veteran
Stratics Legend
All I can say is ....super sweet!!!!! 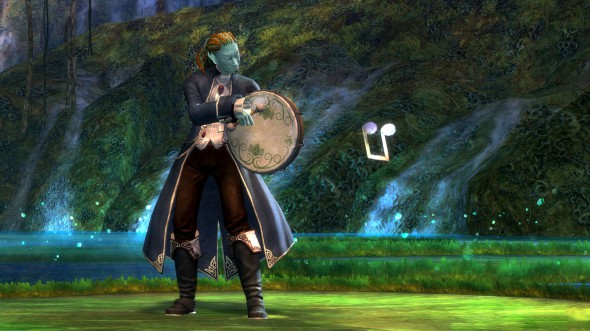 Making Music Together
We’re excited about the drum because we feel that it captures some of the magical quality of playing music with other people. The music other people create with their drums melds with the music you create with your drum in a way that sounds good. One of the best things about the drum is that it’s not difficult to play – you don’t have to be a musician or even know anything about music to make really cool grooves!

So how does it work? There are two drum modes we chose to release: preset groove mode anduser groove mode.

Preset Grooves
The preset groove mode has a set of five composed drum grooves that play in real-time with your drum. These were designed to be useful for running into battle in a zerg as well as stand as a foundation for soloing. To solo on the preset groove, simply push the solo skill buttons to create a procedurally generated solo sequence that will always sound good in the context of the currently playing groove. You can also solo when you aren’t playing a groove – this is useful to play along with somebody else who is playing a preset groove. That’s right daddy-o! Who wants to make the first beat poetry slam in Guild Wars 2?

User Grooves
The user groove mode is a bit more complicated. To start off with, the first five skill buttons have five unique drum sounds respectively. Each sample can be triggered individually so the drum can perform like our previous instruments in free-play mode. The only difference is the drum will quantize beat events so that they always sound good to you – and in rhythm. If you push the sixth or seventh skill slot, you put the drum into “loop-record” mode. If this is the first time you’ve pushed it, you’ll hear a nice little click-track (that only you can hear!) that gives you an idea of where the “global” pulse is. Think of it like a count off: “A one, a two, a one two three four!” Then, when you push the drum sample set skill buttons again, they’ll actually loop back on themselves. You can build up ever more complicated and funky grooves. Pretty cool, huh!

Of course, you can flip back and forth between the preset modes and the user loop modes. If you switch to a different groove, it’ll play that groove in the right phase of the musical phrase, so you can “remix” the grooves to your heart’s content. Also – you can solo on top of your user loop! 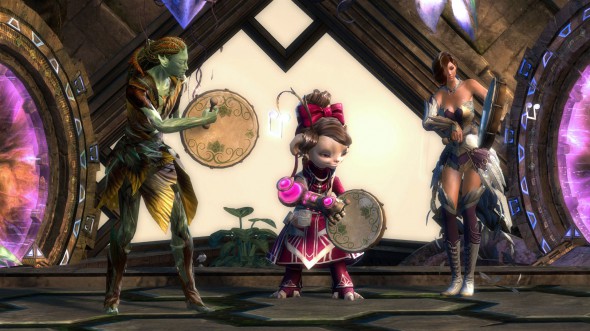 Some Caveats
As awesome as this drum is, there are some basic limitations to the tech. First, your user loop will not save beyond your current map, so if you jump to a different map, your user loops will be cleared. That’s because the data for your loop isn’t saved on your character record or on your hard-drive. We’re currently investigating some possibilities that might allow this to change in the future, but in the meantime it’s easy and fun to make new user loops, so we don’t expect this to be a huge issue.

Also, the groove you create may not sound exactly the same from the perspective of somebody else’s local client. This is because the quantization process on the client to make it sound good. If the lag is longer than the quantization amount, you’ll hear the beat your friend played one step further than they played on their machine. Unfortunately, it’s impossible to predict what somebody will play before they play it – and it’s impossible to transmit the information instantaneously, so the next best thing is to quantize the event so it’ll at least sound good to you. We’re working on some new tech that might reduce the effect of this as much as we can.