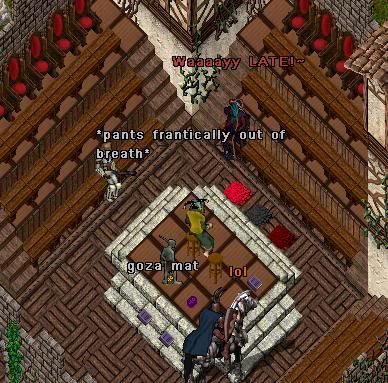 Events For The Week
​
Thursday, June 23rd @ 8pm ET, Olmecian Access, Gate from the Luna Bank
This is the first of a series of events related to the wrapup of the Poseidon's Fury arc, as well as the first venture into the mysterious temple discovered during the "Legends of the Hidden Temple" event. Expect puzzles and combat! *Olmecian Access Orb NOT required*

EM Drosselmeyer
No you do not. It's yours forever and ever. To hold and to admire and to gently polish.

Zanku
Do they or you change servers when we are doing an Em event?
Seems when we do the events,the servers go down a lot and we get dis connected a lot.

EM Drosselmeyer
I can answer you affirmatively that we do not and there's realistically no way that they could change the servers while we do events. There's a lot of reasons for that. Sometimes there are items that crash a few people for reasons we don't understand. We've found a few through EM events. Sometimes it's too many players, sometimes it's trying to load too much deco, lots of reasons. Well, I don't know everything that event involved so I can't really speculate But it's not anything specific. When I attend events as a player, I crash too Heck I crash while running events sometimes if you've noticed. Aside from that, just make sure you've got up to date patch, make sure you aren't running memory eating programs outside.

Yoshi
I was wondering if we still need all the stuff laying around the humility shrine?? We cant get to the ankh to rez.

EM Drosselmeyer
We'll have it removed thanks for reminding us. Until then you should be able to use it by approaching from the NW and apologies for the inconvenience.

Uhaul
For those that are just joining the shard, is there a way to get a sash with your name?

EM Drosselmeyer
At the moment, no, but I'll ask about another giveaway. I am coming up on a year of being here after all!

ARMA
This may be a dumb question, Where is Dudley?

EM Drosselmeyer
Dudley is busy shining the bells on his hats or something. Eating sweets. I'm actually not sure! As far as I knew he was supposed to be here tonight. He's definitely not buried in a shallow grave somewhere for trying to change the locks on me. And he's absolutely not suspended by his toes on a weakening rope over a fire ant colony. And he's almost certainly not covered in honey and hogtied in front of a bear cave. These are things we are fairly sure of.

Uhaul
Your robe is so much nicer then the other shards Ive been on. You need to teach the others lol

EM Drosselmeyer
That's because mines made out of leaves. I'm a plant, you see. I sprouted from an EM Seedling! Dudley still holds the rest of my brethren trapped in frozen animation. That's how the cryosphere really came to be. He needed to keep those and his drinks cold. But shhhh don't tell. It's our little secret.

Elder EM Dudley
*pants frantically out of breath*
There I was counting crabs and lobsters...I have updated totals

HugePvPneSS
When is their gonna be a pvp tourny?

Elder EM Dudley
We've had some PvP events in the past Some including Tournaments and such We can put it on the schedule for next month.