In honor of the retirement of Captain Aneirin Grace of the United Pirates, we will be throwing one last bash for the scoundrel.

The party will be in the form of a story night, where the theme of the story is the man himself, Aneirin. The stories must cover a trait or encounter with Captain Grace.

(OOC note, I don't care if they're true or not... and stories that make me laugh will be most welcome!)

The time of the party will be Saturday July 30. The time is 7:00PM by the eastern stars.

And the location, of course, is the Jolly Roger inn of Red Skull Bay. 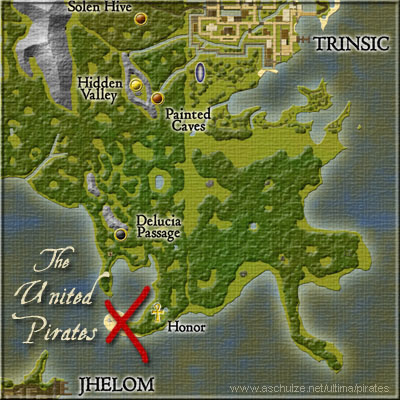 (OOC note 2: There is no contest or reward involved. While I don't have any trouble planned, Aneirin will be in character and act accordingly... So for those highlighted with UP, dress appropriately!)
T

Unfortunately, I will be out of town on July 28th. Hopefully, making my fortune gambling since the Pirate life has not been paying well lately. Aneirin, you have been a good friend, crew mate, and leader. I will certainly miss you as will the rest of the crew. Since I will not be able to make the official event to bid farewell to Captain Aneirin Grace, I have posted a little story I remember (sort of) of some fun you had with Hawkeye Pike. Before the story I would just like to add that pirates don't retire they just sail a little less.

Story as remembered by Trin:
Sometimes the Jolly would smell like a slaughter house when Pike's flatulence acted up. This did not go unnoticed, it could not go unnoticed. One day while eating some fine food prepared by the Jolly's top chef, Anerin's meal was ruined when Pike had an especially bad bout with his bolting.
Aneirin decided to teach Pike a lesson. He mixed some prunes and salt with Hawkeye's warm brew and waited until the Captain was too drunk to taste the difference. As Pike started drinking the tainted brew we left the Jolly and began a sail to Jhelom. Pike wanted to the crew to check out Jhelom, a spot he had his eye on since another guild had claimed Trinsic as their territory. Although only a short distance from Red Scull Bay we had not reached the halfway point then Pike began swearing and running for the bathroom. He had had about six of the special brews Aneirin concocted.
As if this would not have been good enough, Aneirin had greased the seat in the bathroom and applied a fine layer of sand. Har, Har, Har, the crew laughed all night while Pike spent the night in the bathroom.
The following two weeks Pike did not fart one time in the presence of the crew but alas his memory was short and the lesson short lived. *farts*


Well, like I always say sometimes, sorry we are ta sees yas leave our pirate band, but it was mostly smooth seas, good fighten off undead and "landlubbers alike and always a glad time at the Jolly Roger Tavern when you was there mate! So safe journies to yas, calm seas and fair skys ahead.
We'll meet yas this one last time and toast yer good health, as mates should. There be "No black spots" from us to ye Anierin, har. har. *wipes a tear away*, dang sea mist anyway.

Well I may not be able to stay long, but I shall be on to hoist a mug in your name!

That is the day after my brother comes home so I can't promise anything either.

Because of unexpected developments, this will be Saturday July 30 at 7PM EST.

Stratics Veteran
Stratics Legend
UNLEASHED
Sadly we will be out-of-town on Saturday, but I wish you your first mate and your new crew all the best!

Stratics Veteran
Stratics Legend
UNLEASHED
Well, as the stuff of life goes, yas changed the date on me. *Loggins and Blind Tom looks at each other*, well, we'll just have to save our grog and stories for Saturdays festivities, *Belches & farts*...sees yer scurvy pirate mugs then, er 'i'l drinks me brew me self! ahhhrg!, says Tom. No, says loggins, I'l drink yas under da table rouge! har, har.
T

Stratics Veteran
Well, since the day has changed I will be able to make this party. I'll see you this evening matey's.

Stratics Veteran
Stratics Legend
Thanks for the fun folks.

I'll see you when I see you!

Stratics Veteran
Stratics Legend
Aneirin, you will surely be missed! You are by far one of my favorite pirates...

I am so sorry that I didn't make your event on time... the EM's had been trying to track me down all day and found me in the middle of our CoD guild meeting (which was at 6 PM EST) and I didn't get freed up until almost 8.
Show hidden low quality content
You must log in or register to reply here.
Share:
Reddit Pinterest Tumblr WhatsApp Email Link
Top