[EM News]Anchored Around The Tavern Keg For The Latest Gossip 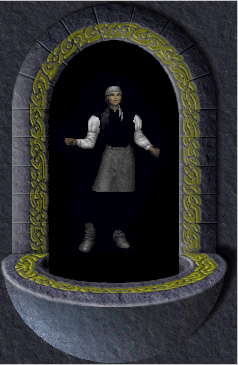 Incidents Throughout Trinsic
"It's nice having more people around though *wipes her hands off on a cloth* There's been a lot of commotion lately, a lot of our usual customers seem to be more irritable And a lot of people we don't usually see in have been getting drunk and unruly. We had to have the guards come by several times in the past week or so. They managed to disrupt what almost seemed to be a riot but..."

Elise Symeria quickly glanced over at the oven noticing the cookies were done. Like any good chef the food was more of a priority then the story. Once the warm, perfectly moist cookies were out Elise glanced down at the ledger to remember what she was gossiping about while writing a few notes.

"It's not just here that's been needing more of a guard presence a lot of incidents have been reported in Trinsic lately, the guards are barely keeping up with it. They've been discussing looking for others to assist them but I don't know if that will work, there's been a lot of trade disputes, and...

Ani interrupted her story shouting something about a ghost somewhere. Elise quickly snapped at her "...Oh shut up, Ani, it is not the ghost of Clainin. Sorry, she's a little crazy about ghosts..." Elise continued on with the gossip...


Nobles Reforming a Council?
"I've heard a lot of rumors and a few of the Trinsic nobles eat and drink here But it seems like there's been a lot of fighting going on about leadership and what should be done with Queen Dawn gone.... Well... there's no Council, there's no royalty, and the nobles own most of the land or businesses. Depends on which noble we're talking about.

The only person who's still around who was on any of the Councils is Dupre And nobody's been able to find him with him running the True Britannians faction in Felucca. So the nobles think that they should reform a council, but they're fighting about it Because obviously they all want to be in charge and have the best position."


Lord Cauthon and Lord Caleb
"There was also some sort of kidnapping...The owner of the East Britain Bank and a few other businesses in Britain, his son was kidnapped...or at least that's what he's claiming. I only heard about it because he blamed Lord Cauthon here in Trinsic of having something...to do with it, and Lord Cauthon has been in an outrage about it he was trying to get the Britain town guards to arrest him for slander, but they said they had much more important matters to deal with.

Lord Cauthon and Lord Caleb have held a grudge since as long as I can remember. I think it was something to do with some kind of quarrel from back when they were fighting...with the militia and trying to free Trinsic from Juo'nar's hold *frowns* I wouldn't like to think that Lord Cauthon would do something like that...but I don't know. It's hard to say what some of them are capable of still, Lord Cauthon has children of his own so I don't know that he would

Lord Cauthon's been absolutely furious about the allegations. He said he was thinking...of getting all the nobles of Trinsic and anyone else he could convince to stop using the East Britain Bank, and stop trading with Caleb's businesses. With everything that Caleb owns that could hurt a lot of people though..." *frowns*


Tokunese Empress
"There's been a lot of trade disputes and similar things going on though. I've heard it from travelers from most of the cities on the continent And then there was that terrible business with the Tokunese Empress...Oh, you were there? And yes, but who? Dupre is a great man...but he made a vow with the True Britannians and he's never gone back on such a thing. I don't think he'll abandon the fight there until Minax's threat has been removed."


and with Elise Symeria's shift coming to an end all of the customers made their way...rushed towards the exit before the Crazy Ani came on duty.
Show hidden low quality content
You must log in or register to reply here.
Share:
Reddit Pinterest Tumblr WhatsApp Email Link
Top