And for good measure we'll throw the normal named orc into this too. They didn't seem to warrant their own feature so I'll group a few together. /php-bin/shared/images/icons/smile.gif 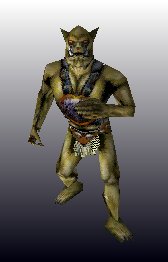 The normal named orc, the prey that every newbie starts on after his/her first great hart falls to the prowess of an NPC vendor's katana. These guys give about 50 gold, a weapon, an item such as thigh boots or a bandage, and one carved raw rib.

The frightened orc is a newcomer to the world of UO. He has the same loot as the normal named orc, but acts differently. Instead of foolishly charging into battle...he flees the other way. This fellow has a knack for distracting pets and making them run away from their masters. 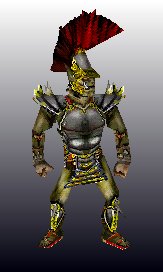 The orc lord, one of the heavy-hitters among the orc dexers. He averages 130 to 300 gold, and in some areas his loot is quite formidable, averaging around 700 in the desert around Compassion shrine. He sometimes has magic items as well, gems, a two-handed axe, ringmail tunic, and thigh boots. On occasion he can also have an evil orc helm. 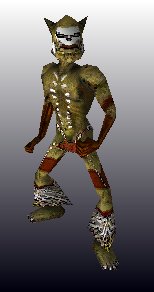 Depending on your skills, an orc mage can be a formidable opponent...especially if he has friends. These guys have 100-150 gold, reagents, gems, scrolls, arrows, potions, and the occasional mask of orcish kin.

The mask gives the wearer the ability to walk among *orcs alone* without being attacked. Other monsters will still attack. The mask explodes if the wear attacks an orc...or a pet connected to the wearer attacks an orc. This can be useful for sight-seeing purposes in invaded towns. Orc mages can cast a wide variety of spells and can cast a flamestrike or ebolt with the same finesse as a daemon.

Fire up the haikus and commentary, it's your turn! /php-bin/shared/images/icons/smile.gif

Orcs have always been the representation of total stupidity. They're extremely easy to kill, but have one big advantage: cheese and ale! Yes! Orcs apparently love cheese and ale, as they almost always carry those around. The orcish cheese is, allthough it was made by a dumb species, actually the most delicious of all cheeses available. The reason they carry ale is simple: they are alcoholics! Anyone that ever encountered both 'shardies' as 'uruk hai' know that they love alcohol and the Uruk Hai even demand it as tribute to the Bluudgod (in other words: the Guardian).
Because of their desire for alcohol and their constant state of drunkness, they can act quite slow and clumsy.
However, this can't be said of their commanders (the lords) nor their shamans (the mages). An orcish lord can be quite easily beaten in combat, as they aren't strong and have a very weak magic resist.
The shamans are bastards though! Their magery is quite strong and it's wise to always kill them first, once one is confronted in a group of orcs.
They have the ability to cure other orcs as well (in other words: FILTHY BASTARDS!!!). The chance to get a mask on them is quite small, as I only found 1 mask so far, and I must have killed 150 mages.

As they are humanoids, they are quite able of that most noble among skills: looting! That makes them filthy bastards as well! Each one of them!

As far as I fought them lords, I haven't gotten any helms. But on the other hand: the bomber and scout are more common than the lords, mages or normal orcs alltogether!

And yes: orc mages can provoke pets against owners! j/k no they can't; just playing with all those 'believers'...

The loot of the lords has been decreased for the 'quest'. They now only give gold and one or two armour pieces.

Frightened orcs: I used to have a theory that these orcs, combined with a mask of the orcish kin, would give info about the invasion. That would have been a real quest plot. But I forgot one thing: O$I has a 'quest engine'. In other words: an excuse to let monsters spawn inside towns instead of outside... In other words: frightened orcs are just cannon fodders that need to die as quickly as possible...

vilest hearts,
uglier faces,
now you march,
in darkness' graces,
mage and lord,
toady and fodder,
each to his own,
each uglier than the other,
annoyances to most,
threats to a few,
you soxxers
i roxxers
'cause i own you.

ROTFL I love it Windkeeper! Describes them almost perfectly. /php-bin/shared/images/icons/smile.gif

*ROTFL*!!! /php-bin/shared/images/icons/wink.gif How about putting up a new section or website for fan art, including pictures and poems? *pokes anybody in charge*

<font color=blue>"I try to get away from the Tamers' Forum, but they keep dragging me back in!"
S

Let's not forget the Orc Captains in this motley crew. I must have been playing this game for well over a year before I even realised they existed! Orc Captains are the ones that look like orc lords (in 2d at least), but are named just like regular orcs. They fall somewhere in between the two in terms of strength and loot.

I used to love killing regular orcs because of all the varied types of food they give. I had a collection of what I thought were "rare foods" and even had them all on display in a house! I hadn't discovered farmer's markets yet /php-bin/shared/images/icons/laugh.gif
This was before rares collecting became a national pasttime, so many other people were interested to see my "rare foods" collection too... until I had the fortune to meet the famed Oceane, that is, who showed me a REAL rares collection! *grins*

It is worthy to note, however, that orcs will drop whole coconuts and plates of cookies which are both technically semi-rare (although pretty worthless). I especially like the plates of cookies because I don't know of anywhere else in the game where they spawn.
S

Hoowah! Come fear us
We are fighting Uruk-hai!
Death to all humies!

Come on, someone do a version in proper orcish! /php-bin/shared/images/icons/smile.gif
Elbryan, give us a quick lesson in orc-speak!
C

Hell no, I stay away from em as far as possible, I'm not interested in those orcs, orc mask and bows and whatever garbage they carry.

No rant but the warriors want em, they can have em. Since the orc quest I finaly find some piece in my favourite dungeons /php-bin/shared/images/icons/smile.gif

hmm isn't it high time someone posted a dictionary on orcish? *pokes james*
and furthermore i feel that orcs should be granted equal rights as other human inhabitants of sosaria. they are at least partly humanoid.

Yes, but trolls, ogres, titans, lizardmen, cycies and ettins are humanoids as well. That would mean: no training pets on titans, ogre lords and cycies, as they have 'equal rights' nor any fame and karma or loot! In fact, that would mean that dungeon Despise would be a city where one can interact with these humanoids. Except for the acid ellie of course; it's an elemental so it must die!