Shadow wyrms, a recent addition to the world of Sosaria, are also one of the most dangerous additions as well. 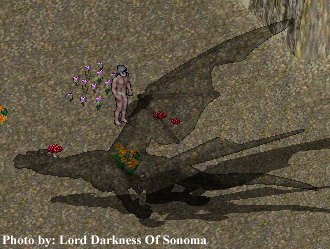 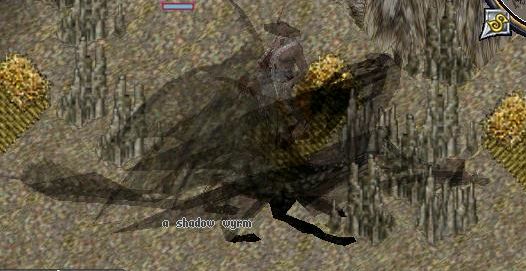 An inhabitant of the bowels of Destard, perhaps the shadow wyrm is the shade of ancient wyrms slain by mankind, returning in a vicious, poisonous form to avenge their own deaths. Two shadow wyrms coexist at a time, along with daemons and mage lords. The shadow wyrm gives about the same loot as a dragon (1200-2000 gold, jewels, scrolls, magic items), as well as 19 raw ribs, 20 hides, and the occasional level 5 treasure map. These guys do poison though I am unsure what variety of poison they use (anyone care to add that info?)

Shadow wyrms are extremely formidable foes. Many people say they are as hard or harder than the ancient wyrm.

When the shadow wyrm was introduced to the test center, a coding error made him tameable for a short time. But by the time he reached production shards this was no longer the case.

Now it's your turn to give us info, insight, or tales of the shadow wyrm.

i think its deadly poison, cant remember if deadly or lvl 5.

SWs deadly poison, which is a PIA as they hit for 50 hp per melee hit at AR 10. inagine getting DPed and lose 50 hp in one fell swoop. kinda like when hallys were poisonable in PvP. i like to hunt them with my bard as they give really good loot and lv 5 maps. breath attach is also at least 50 hp at full health. they kill each other quick when provoked against each other. their magery is also quite high...like 90/90. as far as my tamer, i killed one SW once but both draagons i used were at maybe 10% health tops. i was healing and vetting constantly--one aid start, in vas mani twice, first aid finishes, start another vet, g heal times 2 rinse, repeat, etc. hunting SWs with a bard is the best way to go.

"i will make weapons out of my imperfections."

Its for sure a bard monster. I was in a party and getting alot of fame and karma at Glourios
T

Though my guild has hunted these things successfully at times, surprisingly enough, the more exciting tales were when things went wrong and our plans fell apart.

I can still remember the shrieks and cries of both my allies and their pets as they were slowly slaughtered by these maniacal beasts. One by one, all four of the dragons accompanying us fell, along with their tamers and the mares that they rode upon. Though I had two dragons guarding me, they too fell, when my guildmates became too occupied with attacking mages, drakes, and daemons. I also lost the first mare I had tamed because a shadow wyrm had appeared out of nowhere( it just spawned) and began to munch on it. The mare went down in about 5 seconds, despite my attempt to heal it.

When it became obvious that there were only two members of the hunt left alive,(myself and a bard), and that there was no way I could save my guild masters' dragon(the last one, being attacked by two shadow wyrms, a daemon, a drake, and a mage), I quickly opened an emergency escape portal(gate), and scuttled out of there, followed by the ghosts of my guild mates(I only survived because I hid behind my dragon trying to heal it. The bard made it cause he provoked whatever attacked him onto something else. Everyone else wanted to be a hero).

As bad as that hunt went(i.e. never ever just sit in the spot where they spawn, you can't camp there very well, esp. if lag is emminent), it was strangely one of the more fun hunts I've been on, mainly cause it wasn't just "all guard me, all kill, all follow me" like most hunts with tamers usually are.

Next special on Fox, "When Lag Attacks!"

I hunt these awesome beasts on occasion to enhance the training of my dear pets. Two wyrm/dragons can take one down with constant vetting but it's a tough battle. They seem to have the lowest poisoning chance of all creatures in UO as I have killed over 20 and only had a pet poisoned 1 time. For non bard/non tamers these are some seriously awesome creatures. To look at it purely from a loot standpoint they, like the AW and bally, aren't anywhere near worth the trouble to kill. They do make good training, though. For all those who even begin to think they are on the same level as an ancient wyrm, I have to say you are WAY off. 4 dragons against 1 AW will still = 1 dead dragon if your not vetting fast. 4 dragons against a shadow is nothing.

The other day i took one, i had a partially trained dragon, and a brand new one, i gated in there, and eventually lured one of the SWs up, for the daemons and wyverms are a pain, so my dragon battle one on one with the beast, i let my good dragon take the hits, and he took the hits fairly well, with nonstop vet healing and both of them attacking, my dragons beat the bast down fast, they killed the beast with about 1/10th life taken from my dragon, i think they are good for hunting for fun, or training your pets, not worth the money tho, the loot is far too low for the time it takes to kill just one, good luck if you ever hunt them, btw i have about 81 vet heal, that and an ok dragon had no problem ripping the mighty foe apart
K

Well i disagree i go to AW spawn with 2 WW's and i seem to be ok plus i dont have to deal with all the junk in the room either.Id say for the trouble from a tamers point of view the SW is tougher cuz of the fact they spawn 2 at a time and there in a room with tons of annoying things(definetly a place for a bard or Bard/tamer).But ive been killing AW for quite some time with no problems and you dont have to deal with all that junk.
D

Darn you people, I want to melee one now.

Good luck trying to melee one. My archer managed to avoid getting crispy against one, and killed it. For what loot they have, I think I spent more in arrows to kill one off. I can't imagine taking my parry warrior against one.

My macer Psycore and my freind (gm swordsman etc) take them down with vanq weapons and crosshealing.. Well, did, my freind left UO and im not going near those things without a pretty good reason. might aswell kill Demons instead.

<font color=red>Bridging the gap between being stoned and playing UO /php-bin/shared/images/icons/smoke.gif </font color=red> </center>
B

Lost my best trained dragon against them. I lure one SW away and let my dragon attack it. it was a good fight, till the SW started to fly. my dragon followed him and i couldn´t vet him anymore... then the SW did an amazing firebreath, melee, casting combo and my dragon fell. i had no mana left, b/c i healed as hell (magery) and couldn´t gate out
*looks sad*
W

Twilo i dont buy you meelling a shadow, its just impossible, no matter how many people you have healing. They hit for 50+ and at full health their firebreath does like 50+ even with gm resist then add the poisoning they do. Shadows can kill you in seconds if youre not a bard.
T

Did someone say I didnt have GM Peacemaking and Hiding? It comes in more usefull anyone can ever imagine.. Its not like we sat there and took the 50hp damage.... cowardly warriors can melee them.. not nescicarily kill them... oh yeah ever heard of safe spots? shame it doesnt exist anymore.... oh well

Provoke, invis, provoke, invis: that's usually my pattern when playing w/ the wyrms. It doesn't help that there's a ton of daemons, drakes, wyverns, and evil mages there either.

The first rule of fight club is, YOU DON'T TALK ABOUT FIGHT CLUB!!!
G

Balrons are worth the loot, you can get tons of vanq broad swords from them as well as silver vanq, etc.. They took away the hythloth safe point, but you could Blade Spirit them from it.. and the loot was endless if you had the regs for it..
W

so what everyone is basically saying is that a party composed of at least four gm bards and four gm tamers each with a minimum of three well trained drag/wws could survive the sw and the assorted monsters?

Maybe I'm just plain stupid, but why does the shadow wyrm have a shadow?

Thats a funny thing!! Does a shadow cast a shadow??

or maybe i should drink some more beer!! Or snort some liquid glue.. Could make more sense then!!

Im off to check now. hehe