Teesquared and the Development Team have asked for feedback on the imbalances in the current GCW Leaderboard system that come about from GCW points earnt during Invasion having much more weight towards leaderboard advancement than any other activity.

...Lastly, we want to address many of the issues that have come up with the GCW as its implemented now; issues like the balance between GCW point gains in PvP vs. PvE activities and the types of perks and penalties. We want to keep everyone involved in a fair and balanced war. These topics and more are what we want to discuss with you.
Click to expand...

In last week's update, we adjusted the GCW point rewards for some of the invasion quests. After leaderboards went live we created a new competition among players. As a result we discovered some balancing issues with how points are scored. We are planning to continue to monitor the leaderboards. It's an ongoing system and we are stilling balancing it. We value your input as well and we're looking at various options and suggestions to help keep the system fair and balanced. Keep up the discussions and let us know your concerns and issues.
Click to expand...

This thread is an attempt to drive these discussions and come up with amicable and workable solutions. I'd love to hear your feedback on the following items. It's all up for change/debate, nothing is set in stone. Please keep comments constructive and trolling to a minimum, thanks!

When there is a bunch of feedback I will look to update the thread linked above with your suggestions.

Example: Demoralised Trooper "I'm not going out there... no way!"
Entertainer : (First option) "Think of your family..." / (Second option) "Get back out there!!!" 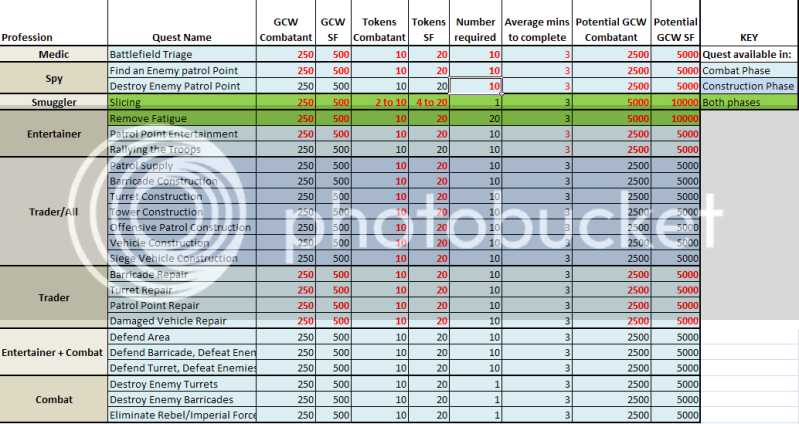 I heard from SWG Producer, Tony "Tyson" Teesquared that the link to this thread has been passed around the team for review. If you have any further comments, please feel free to post!

Alumni
Stratics Veteran
The Rebel Senator recently polled his community about which topic he should adress next.

The options people can vote for does not seem to include leaderboard imbalance issues. Is that being handled seperately?
B

Vince said:
The Rebel Senator recently polled his community about which topic he should adress next.

The options people can vote for does not seem to include leaderboard imbalance issues. Is that being handled seperately?
Click to expand...

I dont think anyone really cares anymore, anyone who had an issue with GCW payout imbalances across different professions has just gone for factional collusion as an alternative.
Show hidden low quality content
You must log in or register to reply here.
Share:
Reddit Pinterest Tumblr WhatsApp Email Link
Top