[BUG] Books in the EC

Stratics Veteran
Stratics Legend
I run a library on Great Lakes, and I play the EC nearly exclusively. One of the things which forces me to use the CC is the complete inability to do anything with books aside from read them. Books in the EC are fundamentally broken.

The book gump in the EC is one of the most generic windows in the UI, and one which does indeed break immersion in the UO world. While the modder community can tweak the look of the gump, its underlying function needs to be changed by the Dev Team.

An EC book has different dimensions than one in the CC, each line of text is longer and there are more of them per page. While a book written using the CC is readable in the EC, the reverse is far from true.

Text written using the EC will scroll off the book page in the CC, as there appears to be no word wrap capability between the two clients. The text is still ‘there’ in the book, but the CC cannot display it. 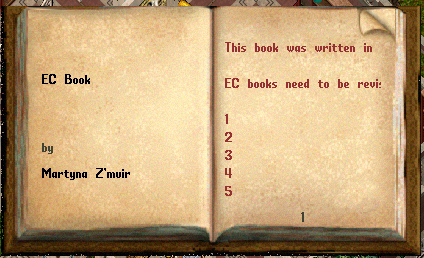 I would appreciate if this basic functionality was fixed in the EC, as it has been missing from the new clients now for 3 years. Reformat EC books to follow CC line length, number of lines per page, and the ability to paste in text appropriately (though please allow us to past in a larger amount of text at once than the CC allows). It wouldn’t hurt to add in a more book-like gump, but I’ll settle for function over form.

Stratics Veteran
Stratics Legend
+1 here, it's an annoyance. To be make things simple they should just port over the CC gump into the EC, that way everything stays the same.

Stratics Veteran
Stratics Legend
UNLEASHED
Can you change the author yet?
And can we pleaaaase be able to mod their skin, or lack of.
S

I'm so used to it by now I guess.. but it needs to be fixed.. in the meantime truncate all lines to 20 or so characters.

Stratics Veteran
Stratics Legend
I will look over it, i think the CC needs breaks at the end of each line. There is also a bug when you page forward and backward again, the text written on the second page is displayed on the title page.
T

I would love the option of using the nice 2D books in EC.

Stratics Veteran
Stratics Legend
Ah, I forgot about the Author line. That is still completely uneditable in the EC, which is an annoyance as well.

I have learned to page slowly through non-leafed EC books, but the over write bug still exists if you turn the page to fast.

Since this system only deals with text I can't imagine it would take more than a few minutes to get working properly, sans CC gump inclusion...

Stratics Veteran
Stratics Legend
I think the problem is more the CC. The books in the CC are totally messed up, they make artificial line feeds and behave very strangely during editing. The EC books finally are a step forward and work like books should work. I think the CC books need to be fixed, but I have no idea whether that is possible.

I currently write books using the CC, as only then I can be sure that they will be legible in both clients. It is a shame that I still need this old client...

Stratics Veteran
Stratics Legend
I concur with hawkye in parts. i too think that the real problem is the coding of the CC book, not vice versa - even though there are minor bugs in there too, that should be fixed.

I'm all for a nice bookish graphic instead of the generic gump - at least as an option to modders. Doesn't need to be the old low-res CC graphic, I'd be fine with a new one too

Tukaram said:
I would love the option of using the nice 2D books in EC.
Click to expand...

Stratics Veteran
Stratics Legend
I won't deny that the CC books didn't have their own special quirks and issues... But compared to the EC books (which really don't work at all for text tentry), they are perfect.

Lets not turn this into a EC vs CC thread. Lets just get them to fix the crippling issues with the EC books.

The issue with books makes me wonder why they chose to revert SOME of the KR UI to use the same system that the 2d client does, but OTHER portions of the UI are not.

The ATTEMPTED to revert the runebook back to the classic version, but THANKFULLY an outcry stopped that because the functionality of the newer runebook is just SOO much better.

However, they reverted the crafting menu (that had the Make # and Make Max options available on the main page instead of three clicks deep), but left books using a plain border-based "default UI build" when they SHOULD have been put back the way they were (graphically at the very least, or at least updated with a book graphic (yay Zym BTW).

And another portion that makes it even more odd is that they reverted the Animal Lore gump back to the old scroll look instead of books when EVERYONE I can think of preferred the all-in-one modded version.

Also, being someone who is trying to make all of the aspects of my UI packages as cohesive as possible, I'm trying to figure out why the Title Bar, Tab Labels, and Buttons between various UI elements are in either ALL CAPS, or Alternate Capital/Small Letters so that there's an odd mixture of both either dependant on the UI element or sometimes both occurring in the same element.

Alumni
Stratics Veteran
Stratics Legend
UNLEASHED
Campaign Supporter
Yes well the problem is that they messed up books and that cost me the other day at the EM event.... I could have had 3rd place all to myself but because the answers I put in for 2 of the locations didn't even show up in the CC I wound up just tying for 3rd..... which totally stinks.

Stratics Veteran
Stratics Legend
The problem here is that the EditBox is not doing the right formating the 2d client needs to display it correctly.

The Editbox is only intigrating a newline parameter when you hit enter.

For example, a string of the classic client looks like

\n is the escape symbol for new line in LUA.

The problem is now when you enter the text in the EC, it looks like:

"Hello my friend. How you are doing? Very good, thank you! \n
\n
Regards Ricardo"

In the EC this string is displayed correctly because the editbox formats it with its size, but the CC needs this new line parameters at the end of each line.

Intigrating it is very complex because how should i read out the end of each line there is no fixed length value of cases in each line only the size of the letters determines it and the problem is here that the editbox is not telling lua when the end of the line is reached.
T