Baja Stratics News: "The Battle for the Ivory Throne" by WarderDragon

Original Article​
In the days and weeks leading up to this most heinous of attacks upon our independent neighbors sovereignty and right to self-determination, a series of pamplets and correspondeses were discovered to have been distributed amongst the soldiers and scouts of Lord Casca's vile mercenary horde. The writings clearly specified the punishment for complaints about ones pay, and for arguing about the presence of what many believe to be a resurgent faction of the Exodus Controllers and their massive mechanical monstrosities.

It would seem that even amongst our enemies, discord and disharmony is the rule rather than the exception.

It remains mostly unclear how the word of their plans was leaked to the outside world, but it wasn't long before rumors of an attack upon the Skara Brae Faire Ground, namely the outhouse tauntingly dubbed "The Kingdom of the Ivory Throne," had begun to spread throughout the taverns and social centers of not only Britannia; but its rivals in Scythe, Horseshoe Island, and even the far away Kingdom of Dawn and Avalon.

Lord Xel of the Ivory Throne tacked this message to the bulliten board sitting outside the Stratics Herald Office.

As the King of my 2 x 2 Kingdom which has a magically enchanted, self-cleaning, luxurious porcelain throne a.k.a. toilet, I humbly ask that the citizens of Sosaria raise their voices, their hearts, and their arms to halt this dastardly tide. The Ivory Throne is not just an outhouse, it is a beacon of hope for those who are subjugated by tyranny, oppression, and that bad portion of fish that you had at the Cat's Lair Tavern. The Ivory Throne is equality, understanding, confidentiality, compassion, a sanctuary and haven for ANY and ALL citizens of Sosaria. It is our FREEDOM!
Click to expand...

As the water clocks reached the sixth hour past midday, a mildly inebriated gathering of warriors and magi from all corners of the realm collected around the Outhouse at Skara Brae Faire Grounds, fully expecting this to be some hoax precipitated by some mischevious fellow. A rumor or no, these brave men and women were ready to give their lives for our nations only working toilet.

And lo, much to our intoxicated amazement and awe, the rumors possessed a grain of truth. Offended by even the secession of a mere privvy, the mercenary horde of Lord Casca of Heartwood descended with fury upon the Historic Faire Ground, ready to reclaim it in the name of the Tyrant King.

We quickly gathered our weapons, and stumbled in our drunken haze towards the mass of disgruntled dragoons and mercenary ronin that amassed before us, ready to die for the Sacred Flush. 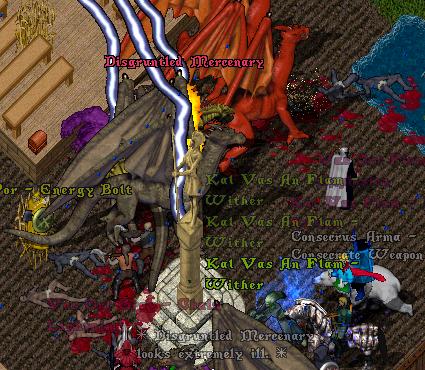 The Defenders of the Ivory Throne fought valiantly, despite their drunken state, knowing full well that if they lost this most necessary of battles, what else could Casca take away? Our homes? Our women? Or worse, our alcohol?! 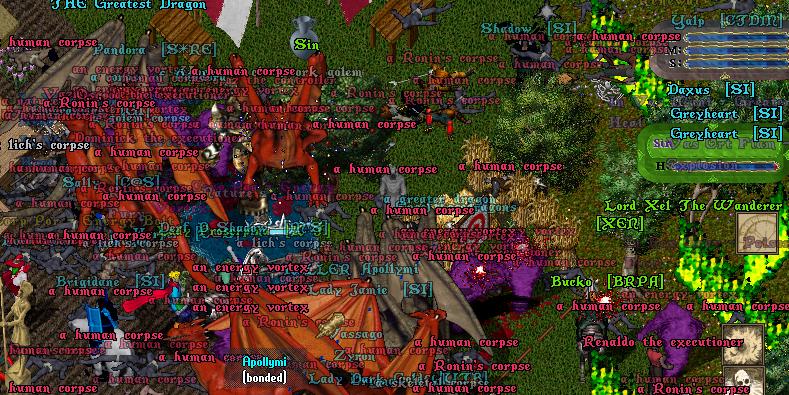 But it would be these defenders who, in what can only be described as a miracle, managed to push back wave after wave of the mercenary onslaught. The Disgruntled Mercenaries, the Exodus Controllers, and the Ronins of Tokuno were driven west into the sea by our small army of alcoholics, crazies, and loons. After dusting ourselves off, we returned to the Outhouse en masse, many of us needing to relieve ourselves of the pre-battle beverages that had been distributed earlier. 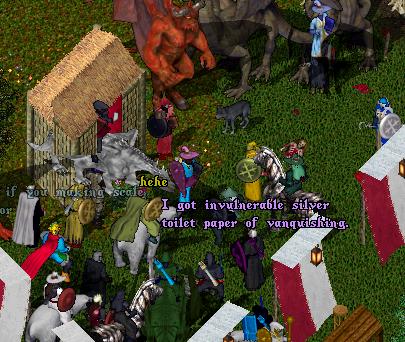 Xel, called the Wanderer, offered a rousing speech to thank the gathered defenders for their assistance and great sacrifice in defense of the Ivory Throne.

The Queen and Leader of the Rebellion, Lady Fahnzjell British the Widow, arrived to bless the defenders and to honor Sir Xel, whom she dubbed "The Lord of the Ivory Throne." Hail to the King, baby! 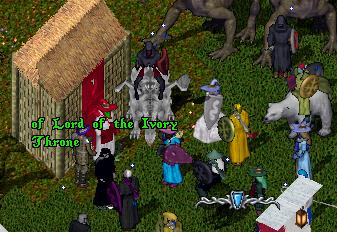 She turned to the others, and asked that they remove their hats and bow their heads in solemn silence. There, she Knighted each and every defender as Sirs and Dames of the Royal Flush. And so the Knighthood of the Royal Flush was born.

She left, but not before declaring the event the most scatalogical victory in the History of Sosaria, and taking a moment to relieve herself in the Outhouse. Long Live the Kingdom of the Ivory Throne!
Show hidden low quality content