Elesil had important information and wanted to meet us again in the throne room of castle in Britain.​ 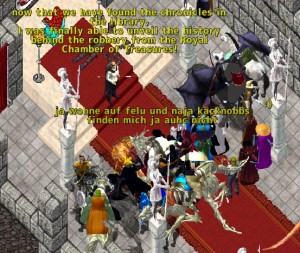 
After welcoming us all she started to explain what she had discovered.​


"Now that we have found the chronicles in the library, I was finally able to unveil the history behind the robbery from the Royal Chambers of Treasures!​
The Chronicles tell of a time when Lord Blackthorn was still member of the Royal Guards.​
It appears that the composition off which the armour is made plays a significant role.​
It is a unique composition of very rare Black Endurium and an unidentified metal!​
These red en closings which i mistook for corrosion are supposed to be of a metal that was dispersed in very small amounts widely over Sosaria, during a gigantic explosion high in the skies.​
Therefore Lord Blackthorn hired tribes and peoples - even entire races - to find him these tiny amount of that metal!​
This makes up the root of all this!​
He wanted this metal more over glory ,honour and above all wealth.​
But when he finally got what he wanted, he was already too far into his chaotic philosophies that he felt no need to fulfill his obligations.​
Now - decades later - have the wise of the particular tribes decided to claim there share by themselves.​
This has lead to the intrusion into the Royal Chambers of Treasures.​
The Chronicles also mention the particular groups that were involved.​
Apparently some were only tasked with the protection of the miners like the orcs and savagers.​
Others were specialized in detection and digging of the tiniest amounts of 'Skystones' ,like elves and dwarfs.​
I am uncertain to which race or tribe he refers to.​
There are also reports about their properties of the different metals.​
The Black Endurium - also known as Black Steel - gave the composition strength without being too bulky.​
The Skystone is supposed to be red metal, heavier and with higher density than lead.​
It develops a magic power strong enough to cause fatality even when only around the metal.​
Only in composition with the Endurium these threats seem to be contained.​
It is being said that neither sword nor arrow were able to penetrate this metal!​
No magic could penetrate the armour!​
Unfortunately there seem to be side effects of both physical and psychological nature.​
It is uncertain in which way these side effects occur.​
But we should consider that even Lord Blackthorn has put this mighty armour away!​
There were other hints on properties associated with the armour, but nothing specific, I think herewith the facts are made clear!​
Dear people of Drachenfels, we have to find the remaining parts of the armour!​
In my opinion none of us wants to know such an outstanding dangerous artifact in the wrong hands.​
Subsequently it is our duty to retake the armour, and keep it in a safe place.​
Because of the chronicles reporting profoundly about involved, i know now whom we should pay a visit.​
This points towards a old Juka tribe.​
A tribe of gargoyles and a race that i cannot associate correctly.​
Their names is 'Dwarfs'.​
Unfortunately i could not find any information on these 'Dwarfs'.​
But there is still hope....Professor Grimm!​
Meanwhile i gave him the antidote and his coma has turned into a very deep sleep.​
Let's hope the Professor will not need too long to rejoin us.​
At this point i wish to take the opportunity to thank all you brave warriors again, who fought so fierce against the army of Dark Angel.​
Thank you for the defence of Drachental and for obtaining the antidote!​
Not only Drachental but the world - your world - Drachenfels owes you gratefulness!​


We must retrieve the armour at all costs!​
For today my plan is to go visit the Juka tribe, let see if we can claim a other part of the armour.​
Please be careful, they seems to be very strong!"​


Elesil opened a gate to the entrance of the town of Mistas in Ilshenar.​
Only moments after we arrived several group of Juka's attacked us.​ 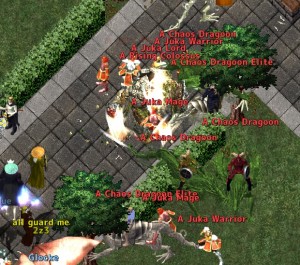 
They came in large number so we had to be very alert.​
Even several paragons came to assist them.​ 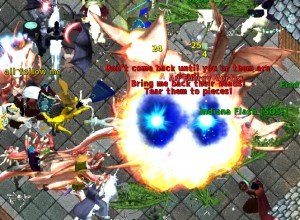 
And if things could not get worse, several Ancient Juka Warriors made there appearance.​ 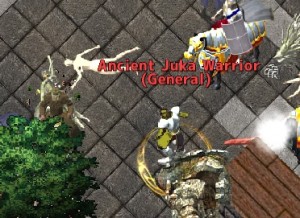 
We had our hands full on the ancient Juka's.​
They proofed to be very hard opponents.​
But ones again great teamwork between the hero gained to upper hand on the Juka's.​
A Ancient Juka Warlord joined the fight and he had some stranger powers that he could call assistance from many strange and exotic creatures.​ 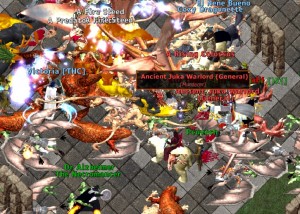 
It was one of the hardest battles we had to fight.​
The Warlord never had any intention to give up that easily.​
It took all what we had to slay this Warlord.​
After a search of his corpse, Elesil found another piece of Lord Blackthorn armour.​
We are one step closer to full recover the stolen armour.​
But now it was time to get a well deserved rest after a long and hard fight.​
Elesil will call on us again if she needed our assistance again.​