Am I a bad person?

Stratics Veteran
Stratics Legend
On Sunday night I went and watched with Wolfie who set off a 5 Story building in TTC. Wow, that is crazy. They go in and within about 4 minutes they die and it resets. I was calling it the "Elevator to Toon Heaven". So last night I went and did it again..

Being a voyeur behind the pillar I watched as they pushed and shoved in front of the closed door: 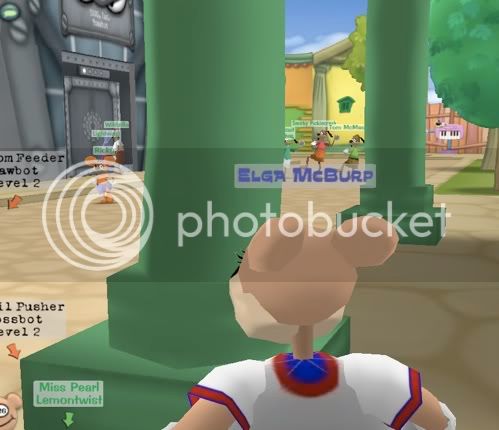 The newness of a noob is classic: 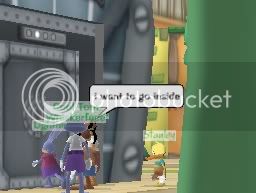 It was entertaining to watch, does this make me a bad person? Technically I'm killing unaware new toons, but you gotta learn somehow right?!
L

Lol i remember when i was a wee little toon i had no idea what cog buildings were or did, and i wasnt a member yet, so the minute a cog building was in the street, toons went in the elevator......but i agree, new toons are going to have to learn eventually!

Stratics Veteran
Stratics Legend
Well, it depends on who you ask. I say no, because if it were a bad thing, TT would've fixed it so you can't call level 5 buildings in TTC. Plus, as you probably saw, often times it was the same toons over and over again, dying but having fun while doing it. Plus at those levels they only lose a few gags, not like they lose 7s that take forever to get back.
Z

Seems like there was a letter here from some adult who thought it was a really bad thing to do. I didn't see it that way then and don't see it that way now. No one is forcing those toons into that building, and it is a learning experience. Big deal if they lose 20 JB's restocking their gags! They can just go for a trolley ride.
L

ROFL! If you are a bad person then I am too. It was just too tempting some days to see a bunch of toons crowding around a building that they couldn't get in to. I made sure to call another for my, err, their enjoyment. I love the picture of you hiding behind the pole. I usually just walked down the street a bit and watched all the fun.

Lol im going to agree with terri, i do it all the time, and your right, you have to learn sometime!
S

I think its terrible to call a 5 story building in TTC!

LOL yea! You have to learn SOME TIME, or you wont know any better! But it also makes some toons more concious... like they wont go in a building unless theres 4 toons, because they know how scary a 5 is, from experience
L

Sarcatstic said:
I think its terrible to call a 5 story building in TTC!

I personally hate people like that. I mean seriously. Just to get a laugh of toons dieing in buildings? Thats like really immature
R

ROSIE T said:
I say make it an event and put on calendar!!!!!
What a riot, love the screen shot!!!
Click to expand...

Put it on the calendar. LOL!
F

Tiff McWolf said:
I personally hate people like that. I mean seriously. Just to get a laugh of toons dieing in buildings? Thats like really immature
Click to expand...

First, they don't die, they only go sad.

Second, it's not their going sad that is funny. It's how they act and such. Seeing a 15 laff with weenie gags going in with other toons who are no higher than 40 laff, saying "We can do this!" as the elevator doors shut.. It's just too funny. It gets even better when you tell them that it's too risky for them, you wouldn't if you were them, etc, and they still insist on going in. Then there are those who know that they will go sad but go in anyway.

Watching from inside, it gets even more amusing. Seeing players doing all sorts of things that just won't work (bad teamwork) and they end up at the playground fast. Then there are times when someone is down to like two laff points but then instead of trying to hit the cog to kill it (and the cog is blinking red), they call their doodle as though it will give them a whole new start in the battle. There are those who will somehow manage to defeat the first floor and with just a few laff points left, board the elevator to the next floor, as though they'll magically not get hit anymore or something.

It's a benefit to them and to others in many ways. They learn to know their limits, the value of teamwork, what gags work together and which don't, etc. From that, they are given the opportunity to become better players so that when they are in boss battles with us, we aren't getting frustrated because they're playing like idiots, messing us up and causing complications that we have to recover from. Not only that, but some players are using free accounts and buildings are so rare in TTC that they don't care if they go sad, they just want to be able to go in one. If the building is too easy, then it's taken down quickly and not enjoyed by too many people. Put up the strongest building there is and then suddenly many players (especially on free accounts) can enjoy the pleasure of going in and fighting inside of it.

It's not done with the intent of causing someone to go sad. Yes, we know that they'll most likely go sad if they go in. But sometimes, they don't care about that. It's like a novelty item to them, they have fun with it. It's also a good teaching lesson for some arrogant toons who think that they are something special. I've seen some players go in with a semi decent group, lost the team one by one and then the last player keeps going and then end up going sad on the last floor (with several cogs left to go), because they thought they could do anything just because they've solo'd other five story buildings before. It teaches them what they didn't already learn, that they need to way the risks and better evaluate if they need help or not. I've seen a few who went sad on the forth floor and lost a few level seven gags, when they could have bailed out on the third floor.

All in all, the babies tend to enjoy it, despite the intent of the building being called.
C

Not if you use it to fulfill a help a new toon task.
I've gone in with another 60 laff a 100+ laff and a sub 25 laff, where we've all made it out in one piece.
Of course the new toon may get cocky and think that buildings are easy.
M

Your not a bad person, your just cruel and unusual.

Sarcatstic said:
I think its terrible to call a 5 story building in TTC!