Alumni
Stratics Veteran
Stratics Legend
I went to the town of Skara Brae earlier today for two reasons.... first, wanted to verify that the nasty Bane Chosen had not returned, and second, to reprimand my banker about some overdraft charges he claims to be owed. The Bane were not anywhere to be seen so I walked up the roadway to the bank, taking in the sounds and smells of the surrounding shops.

As I approached the carpenter's shop I noticed an elderly lady talking to three of the employees outside the building. She seemed upset so I slowed my pace to determine if I might be able to help her.

"Ma'am, I've been here all day, in and out of the shop, and I've seen nobody that looked like what you are describing" the tallest man said. "These other two took a load of Vesper chairs to Jhelom earlier today.... boys, did you see anyone on the road looking like that?" His companions shook their heads.

"Oh dear, I really don't know where to begin looking for him" the white haired lady said. "It's so very unlike him to wander off, and as good as he is with directions and such........ " her voice trailed off as she stood there wringing her hands.

The red-haired man noticed me eavesdropping just then and spoke loudly to me, "Lady, have you seen a man with a long beard and a red hat anywhere today?" I got down from my pony and walked towards the lady, shaking my head no and obviously upsetting her further. She was shorter than me by nearly a head, very neatly dressed but with her kitchen apron covering her dress, as tho she had left the house in a great hurry. I could see there were still cookie crumbs clinging to that white apron, which protected a bright red skirt and shirt.

"Why don't we go to the south end of town and speak to some people there? Perhaps he was noticed by someone" I asked her. It was all I could think of at the moment and it would keep her busy while I tried to come up with a better plan. She nodded in agreement and we began to walk and I asked her what her husband was doing here in Skara Brae, perhaps that would be a clue to finding him.

"I'm not certain" she replied. "It could be that he thought I needed more ginger for the cookies, or that more grain was needed for his herd. He may even be out doing last minute chimney inspections, I just don't know......"

That last part struck me as odd, but we continued on. When we got near the butcher shop I took her elbow and guided her in there and explained to the butcher that we were searching for a lost gentleman, and the old lady described him.

"Well, when last I saw him he was wearing his red suit and hat, he was leading three of his herd out to the barn and he called to me that it was a good day for hot chocolate" she said.

The butcher looked at me as if to say "How hard to find a man wearing a red suit?" but my attention was on the lady, who was becoming more distraught my the minute. I asked her to wait there and walked over to the herbal shop to get some of those herbs that soothe, hoping they would help her. Alas, when I returned to the butcher shop the white haired lady had vanished and the butcher scowled when questioned and said "I've a business to run here! And tending to daft old women isn't it!"

So, Legends, if you happen to see a little old lady with white hair please help her.

Alumni
Stratics Veteran
Stratics Legend
Word just reached me that the dear woman was spotted in Britain today, braving the rough and bawdy Blue Boar Tavern in her search. 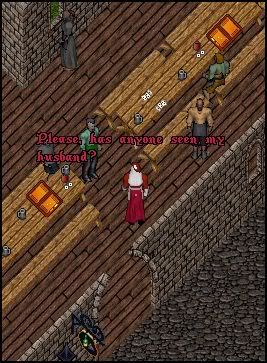