Weapons when equipped, will determine the players first five core skills by their profession of choice, in a player's skill bar.

For example: These 3 professions can only use the war horn.

A Warrior may use a war horn and choose the skill ‘Charge.’ The charge skill grants swiftness to the player and surrounding allies. Also the horn used by the warrior can cure them of freezing, crippling, and immobilization.

The Ranger may use a war horn and choose the skill ‘Hunter’s Call’ and a swarm of hawks come and attack your target.

The Necromancer may use a war horn and choose the skill ‘Wail of Doom.” This skill will inflict daze, poison and weaken on your foes.
.
So the understanding from this information not all professions will have access to all the weapons and the professions that can share the same weapon has different uses for them.

You can view this you tube video from KaeyiDream. ( In the video at 2:19 she talks about environmental weapons)


Weapons can be acquired many ways with in the game and will be scaled to the size of the character. Norns are huge and Asura’s are small. The weapon will be scale based to fit their respective race but still have that distinct look for both races perspective of size of those weapons.

1) Purchased from a weapon smith.

2) Crafted through the disciplines of weapon smith, huntsman, and artificer.

3) A loot drop from a monster or a chest after killing a boss.

4) A reward from completing parts of your personal story.

5)A reward from completing a dungeon's story mode.

- One handed: These weapons can be wielded in either the main hand, the off hand, or one in each hand, depending on the profession.

- Two Handed: These weapons requires both hands to wield it

- Off Hand: These weapons can only be used in the off hand

For example: A Guardian with a one handed and an off hand weapon.

The same Guardian uses a shield in their off hand which gives them the last 2 skills for the last 2 slots, Sheild of Judgement and Shield of Absorption


Two-handed weapons will determine all five skill slots. Once a player chooses a two-handed weapon then all 5 skills will change accordingly to that weapon of choice.

For Example: A Guardian with a two-handed weapon.

The Guardian above would decide to use a two-handed hammer which would give them 5 skills for all 5 skill slots, Hammer Swing, Mighty Blow, Purge Conditions, Banish, Ring of Warding.

Skills are fixed for each profession's weapon and cannot be changed. Now these weapons can be augmented through traits. These traits can be acquired in PvE by completing profession challenges scattered throughout the world and are only can be used after the player reaches level 15. Traits will grant bonuses to those skills if they are equipped on the player. Each profession has around a 100 traits.


The thief third skill will be determined by both the main and off handed weapon.


For Example: A human thief.

The thief has in his main hand a dagger and off hand a pistol. The third skill is Shadow Shot.

The same thief has in his main hand a dagger and off hand a dagger. The third skill is now Leaping Death Blossom.

Six out of the 8 professions have the ability to switch between to weapons sets while they are in combat. The elementalist and Engineer work differently.

Elementalist have attunements which is a special type of skill specific to the them only. They have four attunements, which are fire, water, earth, and wind. They will be located separately above the skill bar since they are considered special skills. Activating any attunement will change the 5 skills in the 5 skill slots. You can also change attunement midcast which causes the other attunements to recharge. 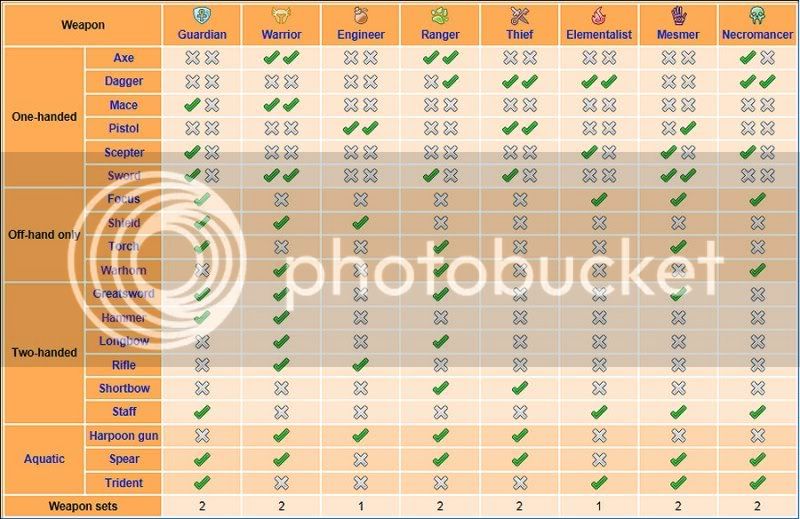 Weapons can have special or unusual attributes.

These weapons can heal the player during the day and steal health from enemies at night. Other weapons might inflict a condition when achieving a critical hit.

The blue is how they are viewed at night and during the day they don’t have the blue hue and look plain like the bottom.

You can also view this video from SageLikeOne

Over at GuildWars2Junkies author Jason Dodge put together this great chart about weapons. Pay attention to the diagrams he marked on the use of the weapons. The picture will enlarge when you click on it. He put a lot of effort and work in this and words can not describe how much the GW2 community could express.


Thank you Jason Dodge and Guildwars2Junkies for all your hardwork and efforts. Please visit their site and support their efforts.


In an effort to help those who might be confused with the trinity-free class system Arenanet has employed, we’ve created a easy reference guide to how weapons and roles (offensive, defensive, and support) breakdown. We have broken down, class by class, each weapon and assigned it a Defensive, Offensive, Healing and Support “theme” to them.

While most healing weapons can be considered Support, we’ve split Healing and Support apart. Many of these weapons can be called something else because a lot of them do damage, support and other controlling effects. We assigned weapons certain categories based on an overall theme and not something hard coded into the class.

Many of these suggestions are mere interpretations; for example a Warrior with a Hammer is not a “tank”. The Hammer has many controlling abilities like knock downs, knock backs, cripples and weakens. We consider controlling type weapons as “Defensive”. The “Healing” label is not exactly a healer as you would expect in a DIKU-based MMO like Rift or TOR. The

Guardian “Heal” weapon has some defensive and offensive characteristics that might label it as support, but we thought it was important to show which weapon sets allowed for ally healing.

NOTE: This chart only looks at weapon sets and not healing, utility or elite skills. A new chart will follow showing those skills separately. Source for this material can be found in the GW2Wiki which sources most of the recent February Beta Event.
Click to expand...

Stratics Veteran
Good summary, though we all knew these long time ago. There are many guides online of how to craft legend weapon, but I am no enough guild wars 2 gold to make one, therefore I m going to search some guides of making gold quickly.
Show hidden low quality content
You must log in or register to reply here.
Share:
Reddit Pinterest Tumblr WhatsApp Email Link
Top