The Tattered Notebook: Build a better character with EQ2U

Alumni
Stratics Veteran
Stratics Legend
Over at Massively they have this great article for you EQ2 players.


The Tattered Notebook: Build a better character with EQ2U | Massively


The Tattered Notebook: Build a better character with EQ2U 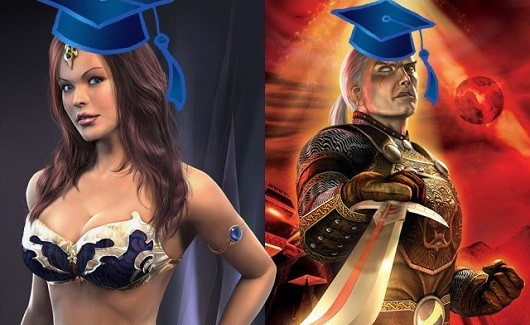 ​
For years, EverQuest II fans have quietly suffered in silence as the EQ2Players site remained broken and buggy. We watched other games, with their Armories, Magelos, and extensive databases, and we pined for the day when we could once again look up things like characters, gear, stats, and guild rosters.

The wait was worth it, though, and EQII players have gone from famine to feast. This past week, we got a glimpse of the newly refurbished EQ2Players site, but what's really exciting is that the EQII team has been working with fansites to provide the data feed and allow community figures to create their own resource sites. Morgan Feldon and Dethdlr, who do an amazing job with EQ2Wire, did just that, and on Friday, they officially launched EQ2U. It's a thorough and regularly updated database of things ranging from character stats, gear, and AAs to spell lists and warder pets. What's more, you can look up gear, track spells, and create your own wish list for your character. Feldon and Dethdlr have been working on this for the bulk of the past year, and Massively had a chance to talk with them about the project. Read on for a glimpse into the site's early beginnings and learn how EQ2U will help you get your characters up to snuff!

Massively: First off, can you talk a little about how this all got started? You've been working on this for a while now, so can you give the readers a sense of what went into this project and how it came to fruition?

Morgan Feldon: About a year ago, Lead Programmer Nander "Zoltaroth" Szots mentioned to me that he'd been working on a data feeds server that EQII fansites would be able to query for EQII game information. We stayed in communication off and on after that.

Dethdlr: And back around June or July, I worked with Senior Director of Platform Client Applications Dan Kinney when I was writing the server status widget used on EQ2Wire. I had no idea at the time that I was working on the same server as the data feeds. I continued working with him for several months to work out some of the early kinks in the server status feeds.

Feldon: After Dethdlr's Adornment Calculator and server status page had contributed so much to EQ2Wire, I approached him about the possibility of building a data feeds-driven site, even though we had no idea what kind of data we would actually get. Then Dan, who oversaw Launchpad 4, was assigned to getting data feeds to a state where fansites as well as EQ2Players could start building on them. We started plotting out the site in September, still with no idea of what the data feeds would look like. That's when the adventure began.

What was it like to work with the EQII team members overall?

Feldon: It's been tremendous. We've been kept in-the-loop, and they have listened to our feedback about the format and quality of the data. Whenever we've asked for something, the answer has often been "check the feed!" because they just added it. The API has changed a lot since we and other fansites became involved, and it has been dizzying to keep up with the changes, but the result has been much improved data in a format that makes it possible to do some really interesting things.

Dethdlr: I can't say enough good things about working with the folks at SOE on this. It really has been incredible.

The original EQ2Players site, when it worked, used to offer things like basic character information and guild rosters. How have you improved upon that with EQ2U?

Feldon: One thing that always bothered me about the original EQ2Players was how it depicted character information such as spells or AAs. It never really looked how it looks in-game. Searches were really limited too. So we've gone out of our way to either closely mimic the in-game display or improve it. The languages tab shows which languages you haven't yet learned, and the warders tab tracks the progress of all 17 of your Beastlord pets at a glance. AAs are displayed just like they are in game, including the text in the popup boxes based how many points have been spent.

Dethdlr: Our equipment view looks a little different at first, but it lets you immediately see which items need adornments without having to hover over each item. We've really tried to make it easier for the player to see the information they are interested in. 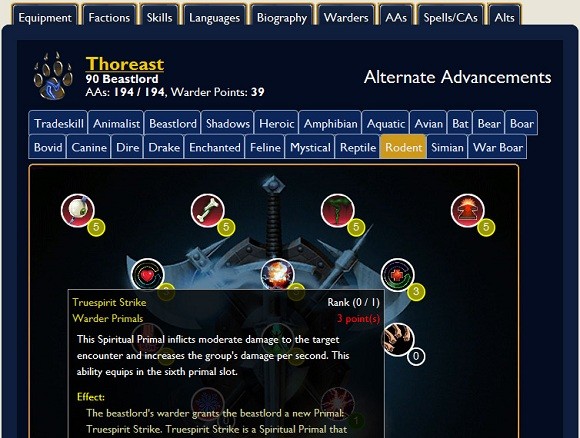 One of the features I really love is the ability to make gear and spell wishlists. Can you talk a bit about how that works?

Feldon: Since Velious came out, I've had to keep a notepad file of all my characters, what items they have, and what items I want to get from different zones, and then try to keep it updated. On our site, each of your characters has a wishlist and a havelist. The havelist is great if you have some items in your bag that aren't adorned yet or if you want to keep track of crafting gear. And as you are searching for items, the wishlist is always there, so you can easily add a desired item to any of your characters. You can also compare any item you're looking at with your currently equipped item.

Dethdlr: One of the first things I built was a complete spell and combat art list for all 25 classes from levels 1 to 90. I had done something similar for my guild's website a few years earlier, but it was all manual entry. Now that we have the data from the feeds, you can view a character, click on spells/CAs, and make a list of all the spells you need upgrades for and what rare materials are needed to craft them.

Can players worried about privacy choose to opt out?

Feldon: Absolutely. Players can do this right now by logging into EQII on each of their characters and deselecting "Enable EQ2Players Updates." These characters disappear from the API on the next update. SOE also went the cautious route with viewing alts and chose to go fully opt-in. This means none of your characters shows up as an alt of the others unless you log in each character and set it that way.

How committed do you think SOE is to the accuracy and long-term health of the data feeds?

Feldon: The data so far have been very accurate and up-to-date. Also, this week, SOE quadrupled the RAM in the two current data feeds servers, and it's already ordered a cluster of five servers that will replace them in a master-slave configuration. The new EQ2Players site runs on top of the data feeds API, so it's in the company's best interests to have a robust setup.

What part of the site are you most excited to reveal?

Dethdlr: The character Equipment page. Within EQII, adornments are shown on the actual items. SOE has to do it this way because the item might be in a bag, a bank, a house vault, who knows? Since we didn't have the constraints that the game itself has on how to display items and adornments, we were able to come up with a way to see everything at a glance. Adornment slots are shown beside the items themselves so that you can see which ones have been filled and which ones are empty without having to hover over anything. I really like it and hope others find it as useful as I do. 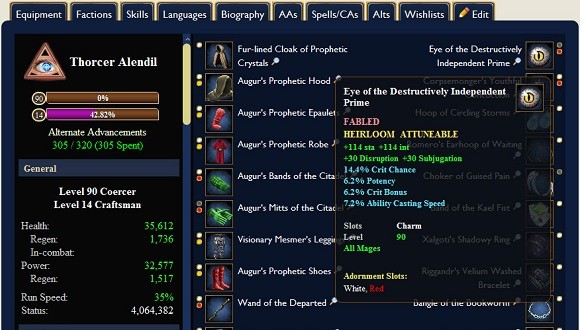 What's been the most difficult thing to implement so far?

Dethdlr: Implementing near-real-time updates. We're doing lots of things behind the scenes to cache the character data but also to automatically update it when things change. Let's say you change an item, spend an AA point, upgrade a spell, learn a language, etc. and then go to a different zone (zoning triggers an export from SOE). Within five minutes, those changes should be reflected at EQ2U.

Will players have to pay for the site?

Feldon: Like its sister site EQ2Wire, EQ2U is free to use. We'll probably be looking at ways to support the site, but at this time we have no plan to charge people to create accounts or use any of the features. We created these tools because it's something we wished to see available, not to make a buck.

Dethdlr: I told Feldon early on that if nothing else, I wanted to create a site that I wanted to use. I've been using it for months, and I can't wait for others to see it.

What features are you hoping to add to the site down the road?

Feldon: We've got a list a mile long of things we want to add to the site. It's been hard picking which things to focus on and putting off other things until after 1.0. Probably the first things we'll add are item discoveries and achievements just because that information is available to us and it fits in naturally with what we have already built. I would like to add some really off-the-wall searches like how many people have killed a certain mob so that we can get some solid numbers of what percent of the playerbase is actually grouping or raiding.

Thanks Morgan and Dethdlr for talking to Massively, and congratulations on the launch! If you're interested in checking out the site firsthand, head to EQ2U. Registration is free, and it allows you access to everything, including the wishlist and havelist features. Happy shopping!

From the snow-capped mountains of New Halas to the mysterious waters of the Vasty Deep, Karen Bryan explores the lands of Norrath to share her tales of adventure. Armed with just a scimitar, a quill, and a dented iron stein, she reports on all the latest news from EverQuest II in her weekly column, The Tattered Notebook. You can send feedback or elven spirits to [email protected].
Show hidden low quality content
You must log in or register to reply here.
Share:
Reddit Pinterest Tumblr WhatsApp Email Link
Top