The Mother of all compilations for the BARD MASTERIES! (Updated 2012)

The Grandest of the PooBah’s

Alumni
Stratics Veteran
Stratics Legend
Campaign Benefactor
The Mother of all compilations for the BARD MASTERIES!​
(fully updated to November 2012 by Poo and Logrus to be 100% accurate, less filling and half the calories yet all the taste!)​

Bard players will be able to select one of three areas of bard mastery, each pertaining to one of the main barding skills. The mastery abilities will be based on the players’ skill in the associated area, but will NOT affect the current way the skill is used nor how the players interact with that skill.

Players will perform a quest obtainable from the quest givers in the Music Conservatory to receive a mastery spellbook.
Players will be able to switch between the three different masteries by toggleing the Bard Mastery Book once every 10 minutes.

Mastery ability initiation.
Once players have chosen a mastery, the abilities are freely usable at any time and only have as requirements the skill and mana costs.

Mastery abilities:
Party must remain within range(8) of the Bard to remain under the spellsong effects.
Spell songs remain in effect as long as the target is in range. Regardless of visibility or Line of Sight.
Spell songs can be de-activated by recasting them. Deactivating them is an instant cast time.
Bards may be interrupted when they receive damage while using their abilities.(In PvM interrupt chance scales with damage)
Mana upkeep cost is taken every 2 seconds.
A bard can have both their mastery spell songs active at the same time.
Abilities do not stack with themselves.(2 bards in party with same mastery ability active- first come first served)
All abilities require upkeep dependent on how many are being affected by the ability. (Cost increases by 1 per 5 affected. including mounts)
Abilities will not check for Criminal flagging, so beware of your Party members.
Ability cast speed is affected by Faster Casting peroperty (Cap = 4)
Bards with secondary bard skills above GM (Real Skill) will receive a slightly reduced mana cost for spell song upkeep.(-1 per additional skill above GM)
Bards with a mastery get a 5% bonus to their success chance at using any bard skills, and a 10% bonus to using the skill of their mastery focus.
All bard songs receive a slight bonus to their effects if the bard has additional bard skills over GM(Real Skill).
For the primary skills (Music + Mastery Focus Skill)
You get 1 point per 10 skill points above 90. (and since the minimum requirements is 90, you automatically are starting at 2 points - one from each skill)
So from musicianship and your mastery skill you have up to 8 points.
Your secondary skills (other bard skills than your mastery skill) you get 1 point per 10 points above GM, so thats a potential of 6 points.
The weighting of those points vary by spellsong and may be a factor or exponential.
For example:
Inspire would be weighted at 2 per point of primary skills and 1 per point of secondary skills.
So thats (8 * 2) + (6 * 1) for a 4x Bard to HCI/SDI -> 22%

Provocation: Title Exhilarator (These will be considered beneficial actions) Peacemaking: Title Galvanizer (These will be considered beneficial actions)

Discordance spell songs are affected by the target's magic resistance. (PvP and specific Mobs only) 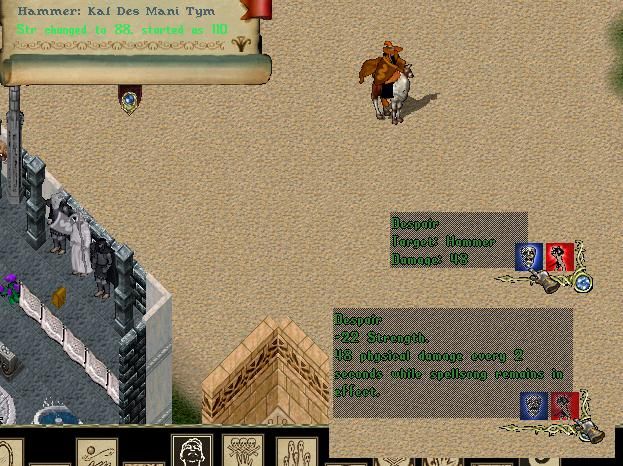 Upkeep Cost is reduced by 1 for each additional bard skill at GM or Above.
Provo Mastery Abilities
Inspire : (Mana Cost: 16, Upkeep Cost: 4, Casting Circle: 5)
Bonus HCI/SDI = 2 * ( Provo Points + Music Points) + Disco Points + Peace Points
Max = 22% (Subject to Item Cap of 45 for HCI and 15% SDI for PvP)
(So Provo and music contribute 8 points each, while peace and disco contribute 3 points each)

Bonus All Damage Modifier (Acts like slayer bonus)
(ProvoPts * MusicPts * 3)/ 4 + (PeacePts + DiscoPts) /2
= Max 15% (Subject to Multiplier Caps of 300% like in slayers or honor. Applied to Spell and Hit Damage and allows cap to be exceeded in PvP)

Poison Resistance: Grants resistance to poison effect in the same way having the poisoning skill does but does not stack with poisoning skill.
Level of Resistance = (PeacePts + MusicPts) /2 + (discoPts + ProvoPts) / 3
Max = 6 (This will even resist lethal poison Lev5 or higher which some MOBs have)

In PvP Magic resist reduces effect and gives target a chance to shake off the debuff:
Resist factor = 2 *(TargetMagicResist / 10) -8)
Damage is reduced by resistFactor * 2
Max: -16
If player is unable to receive damage they willcompletely resist the spellsong.