Alumni
Stratics Veteran
Stratics Legend
Justin Olivetti has a nice write up for all you Tera Fans over at Massively. 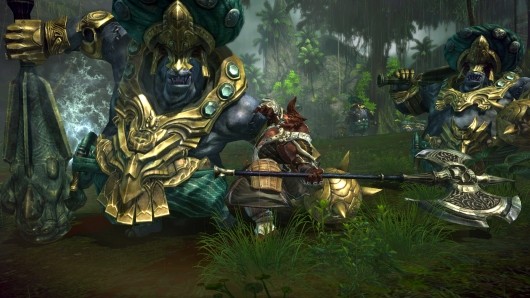 ​
What was En Masse VP of Publishing Chris Lee's favorite memory of working on TERA? According to a new dev diary, it was when Lee got his hands on the first English-translated build of the game: "At that time we were learning first-hand the strengths and weaknesses of each class, how a balanced party made a difference in the instances, and how much damn fun it was to kill a BAM."

Saying that it was a "different game" when the studio first got involved with TERA's Westernization, Lee said that the team had to identify problem spots that would need changing in order to bring it to market in North America and Europe. One of the biggest changes was making the game far more solo-friendly after level 20.

Lee shared a few anecdotes about life at En Masse, including a competition between team members to level as quickly as possible in beta and then again in live. He's excited to see the game gaining traction with a diverse community: "What's really interesting is the variety of people that TERA has drawn. In addition to our strong community, we have seen tweets from NFL players, Penny Arcade editors, and even Felicia Day about playing the game."