Alumni
Stratics Veteran
Stratics Legend
Over at Massively they posted the results of Rift weddings....

Thank you Massively and columnist Matt Daniel for the info. 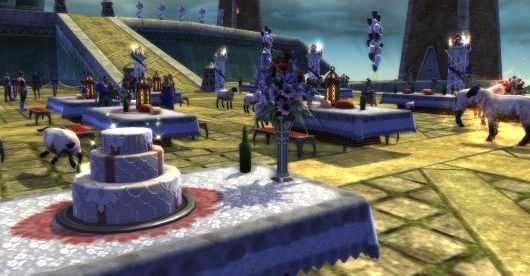 It wasn't but yesterday that we ran our feature on the gaming achievements of the Guinness Book of World Records: Gamer's Edition 2012, but between then and now, a new MMO-related record has been set. As many of you know, RIFT recently added marriage to its plethora of features, allowing players to make the ultimate commitment in Telara. Well, the ultimate commitment besides joining a raiding guild, at any rate.​
A press release today announced that RIFT players banded together with the goal of setting the record for the most in-game marriages in a 24-hour span. We're not certain what the previous record was if there was one at all, but RIFT players managed to set the bar with a staggering 21,879 marriages performed between noon on February 14th and noon on February 15th. RIFT executive producer and Trion Worlds CCO Scott Hartsman is pleased with the outcome, stating in the press release that "Ascended Weddings were a great way to lift the veil on RIFT's new 'Gatherings' feature, social experiences that bring players together in new and interesting ways." He goes on to add that "[the studio] looks forward to expanding this great new gameplay element in the always-evolving world of Telara." So congratulations to all of the lucky couples. Enjoy your new ball-and-chain!