Orcs Taking over Catskills (with stories by Skrug)

Stratics Veteran
UNLEASHED
Skrug was bloodied, and bruised. His staff had hairline cracks down its shaft after the repeated strikes on the animated piles of rocks.
It had been many moons since he last stood in the doorway to Shame. Something was different, the earth seemed harder... things were not as they used to be, but that seemed to be the case across the uzg. The old days were gone, and but a memory.
“Dis amb skah!” He said aloud. “Wut amb dis mojo?” Something tugged at his mind, and he felt it drawn into the depths of the black cavern. What caused this change to what was once a training ground, a place for new gruntees to test their mettle.
“Amb dis de will ob de buurz’ash? Amb de uzg chaynged su muj? Amb dis owr new tezt ob clog?” His memory of the uruckus was fuzzy. It was all so long ago. Clog. Might makes right. The way of the womp’r.... “Clog....” he nodded and set forth back to camp

The small tribe of orcs gathered at the old Yew orc fort. The place that used to be home but was no longer. In a way it was both an ending, and a beginning. The clan was gone, but now there was the Buurzum tribe. Leaving the fort was a step into a new world, much different from the old uzg, yet familiar.
They walked up to the Shame entry way. Its inky blackness called to Skrug. The sound of grinding rock and flame and wind from within was more intense, in a way it sounded not just louder but purposeful, more awake. The five orcs readied their weapons, notched arrows, readied staffs and ran headfirst into the darkness. WAAAAAARGH! Was the battlecry heard echoing off the stone walls. One by one, the earth, rock, fire, and wind elementals fell to the team. They clamoured down, deeper, into the darkness.
They came upon a structure there in the darkness, magics swirled around it. Human magics. Something tugged at Skrugs mind again.
“Clog. Mite meyks rite...” he whispered. It was time the tribe knew clog again, and they rushed into the human fort! Hacking, slashing. Orc magic flared. Orcish arrows sung through the darkness.
And as is with tradition, all the humans died, and the orcs once again knew Clog. 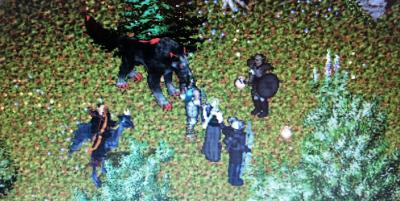 It was dusk when Skrug sat beside the fire. Its flames flickering, casting dancing shadows through the trees. They danced in unison, an ethereal ballet.
Skrugs eyes danced from fire to shadows, and back again. The fire was the strength behind the shadows movement. “Ghaash amb de Clog....” he whispered, “Buurz amb de... amb de....” He held his breath and closed his eyes.
His thoughts trailed off, thinking back to Shame, how the tribe clashed against the elementals, how at times they were scattered, and how once together and working in unison, dancing together, they became stronger. His thoughts drifted back to the dancing shadows.
“Ghaash ambd be clog, buurz amb de snarf...” Snarf, the dance, the tactics... what could Clog be without the dance? “De urks muzt gruk de snarf...” he thought He released his breath and stood, knowing what must come next.


Skrug stood from the campfire. It was almost like the old days, standing in the Yew fort. It truly was just the Yew fort now, the signs of the previous orc clan long washed away. Only the refuse, stench and guttural broken language of the primordial orc species remain. The uruk-hai long away... He walked to the ramp, and placed one foot on the crumbling runway. The fire crackled and spat sparks and the shadows danced. Skrug pulled out a small stone from his pouch, examined it quickly and tossed it into the fire.
The flames surged upward and turned from green to red and back again. A billow of green and black smoke rose high into the air. The shadows danced and seemed to call to him. The signal fire was lit, and soon the orcs made their way from their hiding places to meet inside the old epicentre of the orcish might. Skrug watched as they arrived one by one. He was proud of the tribe in their strength in Clog, but he also understood that the could be better.
He called the orcs into attention with a “LINEUB GLOBS!” It was time to test their teamwork, or rather begin the learnings of clomping together as a tribe. Snarf was knowledge of tactics and teamwork. He had almost forgot the name, as he had been alone and wandering for so long.
“Dis muun, Skrug habd stared entu de ghaash, aghr fownd whiul lats amb bubhosh wif da Clog, lats amb nubhosh wif da Snarf!” “Uz whil clomp dis muun, aght uz whil guw deep deep intu de playz ob buurzum agh ghaash... entu Hythluth.”

The orcs arrived in hythloth, Skrug quickly called the orca to attention before the kighagh (bloodlust) could take hold.
“LINEUB LATS! ASH MUR TING! DIS AM TEZT, NUB URUKS DIE DIS MOON OR UZ STARD OBUR!” Down the orcs descended, cleaving a bloody trail of monsters. The sound of orcish steel, the crackle of orc mojo, black arrows slicing through the dark dungeon, and all the while the orcish drummer banged away a marching and cleaving beat.
The teams strikes seemed to march the beat of the wardrum, the firelight from the torches dances, and the shadows, and the blades, until they reached the very bottom of Hythloth.
And through all of that, while bloodied and bruised, no orc died, and once again the tribe knew Snarf....

Afterward... the orcs gathered at the bard circle... to drink the cider and show the humans their new battle scars, proud as new parents orcs are with their rites of battle.
Skrug told the story of the ghaash’drum in honour of their newest tribe mate and tribe drummer.

Skrug found himself once again lost in thought, and once again staring into the flames of a small campfire he had created. However these thoughts were not necessarily about his tribemates, they were larger thoughts... of virtues. He was missing something.
First, there is Clog. “yub. mite meyl rite” Second, there is Snarf “yub. grukkin clompin agh teemwurk tu meyk Clog wurk” He nodded and closed his eyes for just a second. The warmth of the fire felt good on his skin. It was the shuffling of leaves that woke him from his trance.
Skrug spun quickly to see a large orc rounding from the group of trees behind him. The oaf carried a maul half the length of his body. It lifted the massive bludgeon into the air with a grunt.
Skrug spun around and lifted his hand forward, whispered something under his breath and a black bolt of energy surged forward. The brute did not make it two steps into his assault when the black magic arrow hit him between the eyes. He toppled backward to the ground with a thud, slightly muffled by the undergrowth of the forest.
Skrug wandered forward. The black blood of the orc pooling on the ground before him.
“Skahhed....” Skrug muttered aloud. “Nub fazt nuff tu git drop ohn old Skruggie!” He stated into the black pool of blood. His own reflection staring back at him from the murk. The blackness tugged at his mind.
“Nub fazt nuff... nub enuff.... Faugh” He knew now what the missing piece of the puzzle was.
He returned to the fire, pulled a small greenish stone from his pouch, and once again lit the signal fire to summon the tribe....

The green-black smoke from the signal fire drifted across the sky. The woods were quiet except for the footfalls of the orcs hurrying to the fort. The fort smelled acrid, of fire, and decay and old blood. Skrug stood on the ramp and watched the tribe assemble. He stared forward as the orcs greeted each other with traditional custom and fell into the line up. When all of the orcs stood at attention he spoke. “Skrug hab stared entu de buurzum, intu de bluud... agh me gruk sumting.” “Lats gruk clog, agh lats gruk snarf... but lats nub gruk faugh, da qwiknezz... uz whil guw agh git uld uruk artifakt, skrug gruk it... me ceen it en da bluudvizun!” The small band of orcs travelled into the land known as Malas. To a dungeon in which rivers of blood flow. Skrug knew this would be a true teat of faugh. The monsters inside were plenty, seemingly never ending, and would swiftly overwhelm them once they knew of the intruders.
Orcish blades swung wildly at the local denizens, black tipped arrow sung whispers in the dark as they found their marks. Fast and heavy boots made echoes through the hallways.
The orcs had reached the centre of the tomb of blood. Reached the centre altar that was only known to Skrug through tales told to him as an apprentice. The orcs left tribute to the wargod upon the altar, each of their choosing, mostly in the form of gold coins. What the tribute was did not matter, only that it was a sacrifice of something of value to the orc.
With the blessing of the wargod upon them, the plodded on into the darkness. Only the sound of metal on flesh, and bubbling of streams that were not water echoed in the halls. The approached the chamber at the bottom of the pit and halted.

The hallway opened before them into a large chamber. It was more a cavern than a great hall, no workings of steel or stone to adorn it. The room surround in a moat of blood, with an island in the centre. As the orcs approached a bubbling was heard from the blood moat, as if to welcome the uninvited guests. The bubbles grew bigger, and took the form of giant men, and they rushed forward from the river to bar the path.
The orcs cheered their Wargod for the challenge, and rushed forth. The time of the test of faugh was here, their time was now! “WAAAAAARGH” The blood demons were the most formidable opponents the tribe had encountered yet. The forma healing and reformed as they were hewed by axes and maimed by arrows and magic. Before them they could see the island, and in its centred a skull of an orc, blood red, beckoning the tribe to claim it. As with the teachings of faugh, the orcs knew that might was not always the answer (however was still the answer to “most” things); they rushed the island barely keeping the blood creatures at bay.
They reached the skull and claimed it, and began their retreat.
The orcs ran hard, with prize in hand back to the old fort. Blades were sullied by corrupted blood, bows cracked, and armor spattered with unliving blood. Skrug stood upon the ramp and eyed the tribe.
“Lats awl hab dun good. Shak’buurz am proud! Folluw Skrug...” Skrug summoned a mojo hole to a sacred place, it was time...
[5:00 PM]
The orcs found themselves in a cavern of fire and shadow. The lava surged and flowed dancing black reflections of the orcs on the walls.
They had grown as a tribe, it was time... One by one, Skrug called the orcs forward, and one by one they fell dead to his magic. One by one they were resurrected by the Wargod, to begin life again, as with tradition. The time was now. “Lat kum entu uzg az gruntee, lat nuw wake as uh grunt!” They had all learned the ways of the orc, the ways of the uruckus, and earned the passing rite of gigneh. Each was given the blackened sash of the tribe, as is tradition, each has proven themselves in the eyes of Skrug and the Wargod.
“HOOWAH”