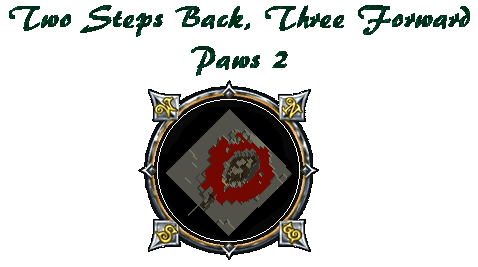 
Captain Gwen Irina,
"After the Fury was fully restored and sent to Jhelom, Andrea Kildare's next task was to return to surveying the ruins of Paws, which we explored some time ago but were stopped due to a cave in. As she was going over her things, she noticed several books had been stolen from her office And at least a few of them were pertaining to the Paws survey and history. With her office in Trinsic, it's entirely possible that they were stolen by the thief that eluded us. In Papua during our investigation. Since we're no longer worried about being excessively careful... She said Balandar could probably blast us through the place. So we're going back into Paws and seeing if we can't find whatever was worth stealing documents."

​
Lord Balandar opened a Gate to the Paws area where Captain Irina assisted with lowering forces down into the ruined Village of Paws. One of the most well known and powerful spells known as "Alchemical Devastation" was used to blast through the cave in site.

The Alchemical Devastation- Is a highly unstable enchantment and should only be attempted by the most learned of Magi. The results of this enchantment are particularly useful in the application of demolition and have been utilized by the Matewan for years to recover precious metals from the nearby Mount Kendall. Caution is again, however stressed, that this spell is very powerful!

"A Power I've experienced only once before....
In the depths of the Poseidon's Fury Chamber..."

​
​
Arrows and Ebolts began soaring through the air as Ancient Swamp Horrors descended upon the group. Minor cuts and bruises were reported but no major casualties. Forces rummaged through the remaining buildings in the area, locating moss covered books which gave clues to what happen so many years ago. One of the Royal Guard members located a secret passage in the western building which brought them to a deeper cave filled with Lava. Within the center of the Lava pool appeared to be another section of the fallen village.

Captain Irina inspected the area and discovered pieces of rubble which appeared to be from an ancient bridge. Among the rubble a Dagger was discovered having bits of frayed rope on it. The dagger appeared to be new, which lead them to believe the bridge was recently destroyed. Lord Balandar ask for everyone to gather outside where he gave the following orders, which promoted a short argument between him and the Captain.

"This entire site is now off limits save for those with my expressed permission." Captain Irina objected loudly but was cut off by Lord Balandar. "We are dealing with an immense power here And, as I am sure Lord Commander Foxx will agree my expertise in these matters is unparallelled." 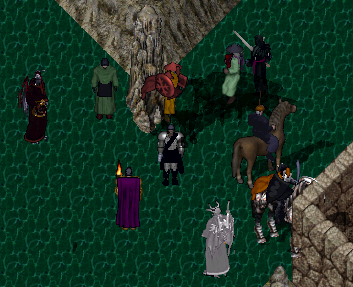 ​
Later that night Commander Drake Foxx arrived to give final orders to those whom were still in the area.

"My Blood was shed in the bowels of the Poseidon's Fury just as much as my own sweat and tears were. That I am aware, Recruit Sarberius. We all know what that artifact caused I don't want to relive it. The realm is on the brink of rebellion and we cannot afford another Derrick Mornwok. Secure this area until the Surveyor's can board it up, don't need anyone sneaking down here. Until then, scout the area for clues."