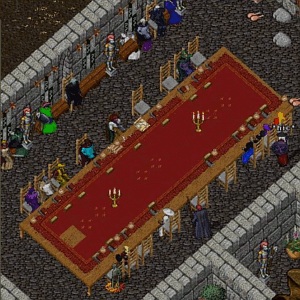 ​
Meeting started at 8:30 by Lady Tavalia Zodok​
Tavalia informs the meeting that the crown has commissioned royal tinker Thomas O'Neerlan to craft new name plates to identify each township in case a representative name needs to be changed.

​
Tavalia opens the floor to the representatives

​
Tancred Redstar notifies the meeting that he has been collecting ideas and information regarding the Public Works project and hopes to report his findings at the next township summit meeting. He asks that anyone who may have any ideas to contact him to discuss them. He also requested an escort from the Royal Guard during some of his travels to Felucca regarding this matter and was told to submit a request to Commander Foxx.

​
Coolhand Luke inquires about time frame to repair the hub connecting COLT to Luna and back. He also spoke of lost income due to the non-functioning hub. Lady Tavalia responded that she would have the Royal Surveyors Office attend to it.

​
Miss Watson announces that Gareth is wanted dead or alive for crimes against the Imperium, Mirt has issued that order and shall be consulted for any rewards. She reminds the crown that Gareth is a captain of royal guard.​
She also requests that the crown name Torchwood, run by Gunga Din, as a Trammel outpost of Kijustsu Anei Village at coordinates 137o 17'S 26o 55'E. Torchwood would be an outpost of the village and not the Etherial Void Imperium. Torchwood will not request a banner while it remains an outpost of Kijustsu Anei Village.

​
Tatania accuses Orin of hiding Gareth and Lady Tavalia inquires about crime that Gareth is being accused of. Miss Watson informed her that Gareth had attacked the Kijustsu Anei Village by summoning a harbinger through well of souls.

​
Lady Tavalia inquires if KA Village is petitioning the crown for support in apprehending Gareth. Miss Watson replies that she is just notifying crown of the circumstances and is sure that he will be caught. The savages were quite happy to hear the news.

​
Scorpio who was seated in the visitors section asks Lady Tavalia how one would join the summit, and Lady Tavalia replies to him that he should see her following the meeting.

​
Ozog inquires as why there is a scarlet rose on the pitmuck banner. He was wondering if it was from Scarlet Von Trinsic or someone else. Lady Tavalia said that Scarlet Von Trinsic was a brigand, an enemy of crown and a wanted fugitive. She then said that harboring fugitive will displease the crown. Ozog denies that they are harboring her. Lady Tavalia said that the crown trusts their allegiance and that if spotted, the citizens of pitmuck would do their best to apprehend her.

​
Jonah offers that the wind blew it up there and Tatania suggests that Gareth was responsible for it.

​
Kaiko speaks of the survey of Zedland Lake. “Last week I had the privilege of leading a survey team into Zedland. We were there to investigate the rumors of an ancient creature living within the lake. We believe this to be an ancient green cracken creature. Water samples indicate the creature has recently given birth. I hope to be given permission by Zedland to return to the lake with my team to conduct further tests.”

​
Rivi informs everyone that Zedland requests more tests from The Imperium while Ozog and goblins offer to pee into lake.