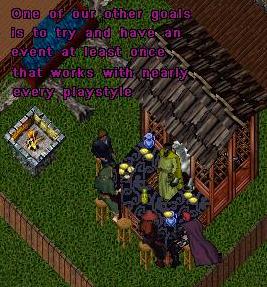 ​
After the Community Hunt on Friday June 11th the adventurers gathered at the Lemonade Stand located in Kijustsu Anei Village. CaT, Mr Clean, Bam Bam and Gareth were discussing the newly remodeled Lemonade stand. After each person gave their opinion Mr Clean sat quietly for a few moments. He informed the others around him that he could hear some wonderful music playing. Everyone became silent and started to listen as well. Once everyone was listening the music quickly changed tracks over and over. They all appeared to be rather confused about what was happening, until EM Drosselmeyer appeared. Dosselmeyer appeared to have received a new toy. The first thing out of his mouth was.

The counter pattern is positively dreadful!

Everyone laughed because they knew it was true. (It really was dreadful) They invited Dosselmeyer to sit and have some lemonade with them and what a perfect time to pick his brain for some information!!!

Do you want feedback from the last event?

I'm always open to hear it, though you may want to repeat it. At the HoC so that everyone may benefit from it but please, go ahead.

I was thinking a logistics person would help. Someone who knows where to go and makes sure the shortcut gate is current. A few people took it and ended up in the Terathan Keep and died. You guys are busy with the event. Maybe have someone who just did that?

That gate should not have still been there, so I apologize for that. Yes, and while we are, we were attempting to tell people where to gather in the EM Event chat. However, there are only so many times we can speak there during the event.

Someone wants to start a guild to do that sort of thing.

I would not see anything wrong with doing that, but we could not make it Official.

One thing you may want to watch is the Talisman on the paperdolls. Unless all of the RP characters are suppose to have them?

The talismans do not have any bearing upon things. So please do ignore them story wise. I am not sure if we can say more on that.

How many people can fit in one place at a time, before it becomes a problem?

Well, technically there's no real limit. The choices of fighting areas for past events were to gauge your group reactions and tactics as a whole. There are smart ways to attack and defend both in wide open areas and small areas. Especially in trammel where, the push throughrules do not apply to players, like they do to monsters. I didn't particularly see anyone having much problem in either area, save for the transition which was a bit of a mess.

One of the things we are hoping to do with our events is make them dynamic. Various choices and actions by players WILL have consequences on the story. Some choices may do minor things, such as giving information, while others could alter entire storylines.

So what you are saying is Don't touch the red button?

Well, there is no right or wrong actions merely East and West or North or South. A journey can begin from one point, and end up at the same point but take any millions of different paths to get there.

Do you guys ever do a mystery? Where people have to find clues?

We plan to do many, many different types of events. One of our other goals is to try and have an event at least once that works with nearly every playstyle. While this may take time to get to your favorite we are trying. It's one of the reasons we made it clear that I am not here to be The PVP EM. While I did introduce some PvP event ideas they are merely some of the first fully fleshed out events that we had ready.

Think you kind of shocked some people with EM items on the bodies.

I do not plan to give rewards at all of my events. However, I wanted to show what kinds of things would be rewarded mainly, story centric and museum pieces. While rare traders are a valid playstyle and one I do not condemn. I do not want to be seen as an Items Vending Machine. When the story suits the purpose that there may be things to be found, or retaken they may or may not be there.

Like the Valentine 's Day thing? I thought that was kinda bad.

I do not know about any Valentine 's Day thing. As I was not here for that, I apologize.

This is a vast and amazing world, Sosaria and knowledge will come in handy in future events. This may not require you to be a veteran but it may require you to be an adventurer, an explorer, or someone who merely knows their way. All events are always welcome to all who wish to join them. We do not run Private events.

There were many dozens of people at the event on Wednesday and I believe that one particular player said he made off with six of the rewards dropped. Quite a haul and a bit of luck for him.

I know how many items had dropped. However, I make it a policy not to say how many of each, nor how many in total dropped. I prefer a bit of mystery in all things. What I'm saying is, you will never have me say after an event, There are this many of X item dropped, this many of Z item, and this many of Y.

(Questions about what monsters carry the items, where to look and if finding items is part of the quest.)

No, it is an extra bonus. These items can be used either by people to sell, or they could be used for story purposes and even used for your own purposes. Something like the Debt deeds could be used for any number of things. Things such as the engraved/personalized items could easily be used as museum pieces, or merely mementos around which to center a story for it.

Be on the lookout for a more detailed interview with Em Dosselmeyer soon!!!
​ 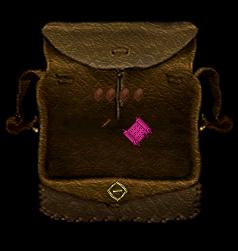