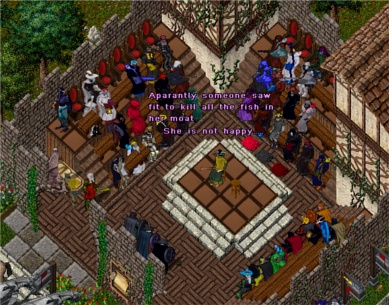 ​
EM Events For The Week

Tuesday, September 21, 2010 @ 8pm ET, Location TBA - The Art of the Steal
The event will take place in trammel. The items that can be stolen are like the daily spawns. Lock picking skill is suggested. Go to Luna bank for a gate to Scarlet Von Trinsic's hideout. (Details...)

EM Dudley
​
There was a discussion posted regarding the possibility of a Mage Tower being built on the Trammel side of the realm And that moved into a broader discussion regarding other buildings and structures, of an enhanced variety. We've read the feedback, read the ideas, and are taking them under consideration. As I've stated, our focus is on the Player Towns. That is where we'd like to see the activity. That being said, as in any social situation, there are of course going to be bumps in the road. I will tell you this. I sat all weekend and contemplated whether or not to put the entire Township Summit series on hold. It takes up a significant portion of our schedule, which is ok, But what concerns me is moving forward with it. If it is going to be possible for people to interact on an in-character, role played manner, I do not want anyones feelings to get hurt. I do not want anyone to have to go on blood pressure medication over this. This is supposed to be fun. If it is not fun, if you have issues, please contact us personally. [email protected] and [email protected] I want you to take all that out of character....enthusiasm we'll call it And apply it to your in character interactions. That is the biggest hurdle seeing the difference between the in character interaction versus, the out of character interaction. What I am getting at is If you don't like someone, fine. It's life, that happens. Instead of letting that ruin the in character interaction use that to develop the story, and develop your stance. For example In the hypothetical world of Dudleyville. My hypothetical neighbor and I play different townships. I really don't like my neighbor, we'll call him Bob. I really don't like Bob, he lets his dog pee on my lawn, and he borrowed a propane tank last summer and never returned it. I mean who does that? Anyway At night, we play UO. I take the fact that I really don't like Bob and decide I"m going to war with his township. That is where the Summit Meetings come in. Obviously we need to moderate these interactions to some degree And that is the forum for it. The point I am trying to make here is, at the end of the day we should all be able to sit down at a table and at least be civil. If what I saw in that thread is the direction this is going. Then we are going to move in a different direction, because it is seriously not worth it. And time is better well spent. Thank you for listening.
Show hidden low quality content
You must log in or register to reply here.
Share:
Reddit Pinterest Tumblr WhatsApp Email Link
Top