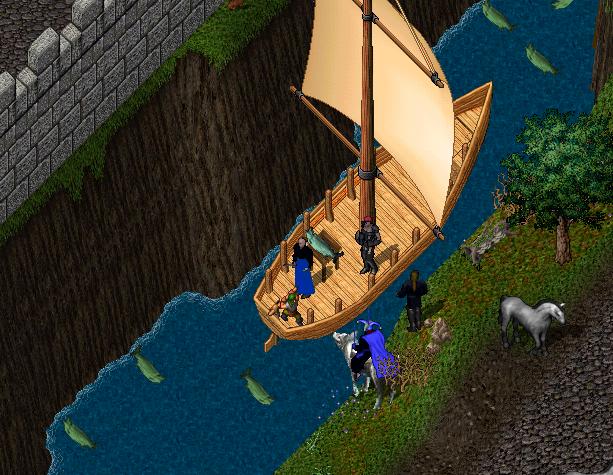 Lady CaT made her way to Britain Bank to do some late night withdraws. According to her everything was going fine, until she noticed dead fish beginning to float on the surface of the water. Lady CaT made her way to the docks located near the Oaken Ore building, to inform the local Harbormaster about the situation. Once she arrived she saw Kaiko delivering some papers to some sailors in the area. She waved Kaiko over to her and then explained what she had witnessed happening in the moat.

Kaiko went over to the Harbormaster and requested she be allowed access to the moat. Without any hesitation the Harbormaster granted her request. She signaled Lady CaT to come on board her new Research vessel. Once on board they lowered the sail and brought down the mast. Kaiko grabbed the ores and rowed under the bridge to the castle moat. 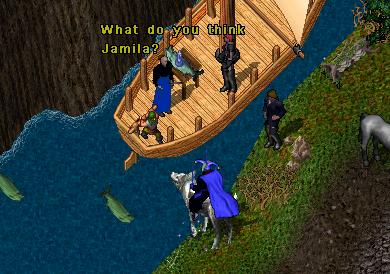 Messages were sent out to townships informing them of the current situation at the moat. Lady Jamila, Emma Silvermane and Ryo Ohki of Guardians Gate came to assist in the investigation. If you can even call what Kaiko did an investigation. It became rather confusing.

They brought one of the fish on board and began to examine it. From what I remember they took down some detailed notes. Then something about the color of the fish and Jamila telling them to wear a mempo mask. At some point they sliced the fish open and found some type of green or blue filled glass bottles. All I remember is the bottles a large colorful sparkle. 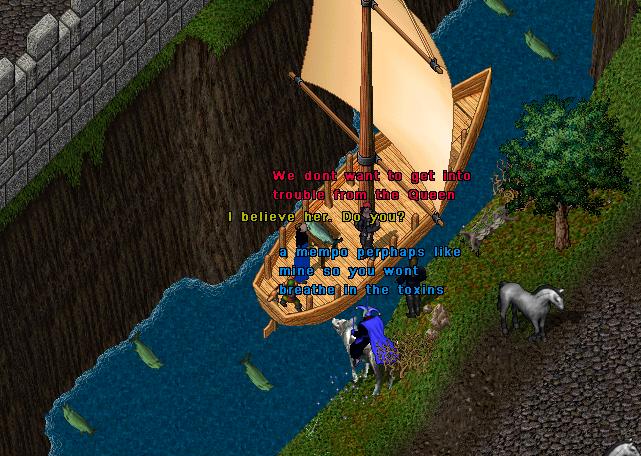 After about an hour of figuring out who everyone was and why they were there, the "investigation" was wrapped up rather quickly. As they all began to return home a poor little mouse fell over dead by the moat. The reason I mention this is because it was no ordinary rat. The "rat" was a person who may have used the Ninja skill of Animal Form Illusion. Kaiko removed a few items along with a rune that appeared to have a Trammel etching on it. She quickly departed East down the road as I attempted to catch up to her and get a statement. I had just made it to the fountain by the bank when three unknown people appeared out of no where and grabbed Kaiko, near the Artists' guild building. As fast as they had appeared they disappeared into the night.