[News] A Wedding To Remember...


Citizens gathered to attend the wedding of Lord Shef Sigurth and Lady Kitkitarria but you could tell something was not right by the expression on the face of Lord Enterprise when he stood in front of all the people gathered to witness the wedding. Everyone directed their attention on Lord Enterprise as he prepared to make a troubling announcement to the guests.
​


Guests quickly suited up and were reading to join the Aryslan lead search and rescue team. The team was given orders to report to the Valor Shrine located in Ilshenar. From there they would be taken to the Sorcerer's Dungeon where they believed Kitkitarria was being held.

Once inside the dungeon vile creatures were seen gathering in the shadows waiting to launch surprise attacks upon the team, as they made their way down the long and dark corridor. With each step they found themselves engaged in battle. Creatures appeared to come from all different directions but despite all of this, the team continued to move forward. They knew the stakes were high and that they could not afford to fail.

As they made their way up the stairs and stood on the landing they stopped and listened for a moment. The only thing they could hear was the breathing of the other people around them. The hand signal was given to move forward. Once they began to move two very loud and distinct sounds were heard coming from the shadows around them. They stopped once more to listen for signs of moment but it did not stay quiet for long. Manic laughing, bone cracking and ear piercing screams loudly filled the room all at once.

The team looked to Aryslan Elders for orders. For a brief moment they saw a glimpse of the expression on each elders face. It was not an expression of fear but of one that could tell you horrific stories. Stories that no man, woman or child should ever have to live through. They charged into battle putting the undead back to rest over and over.

The team looked a bit fatigued and rightfully so after the countless battles they had won that evening. In a dungeon that felt like it was built to be a maze of rooms and dead end hallways. Just as some began to wonder if they would ever find Kitkitarria or make it out alive they found themselves in a very unusual room. It appeared to be a grand meeting hall with jail cells. A mummified body was laid out on a dark stone table. A book appeared to have been very carefully placed on top of the body. As they cautiously went deeper into the room a surprise undead attack was sprung upon them. The team mustered up enough strength to once again defeat the undead. 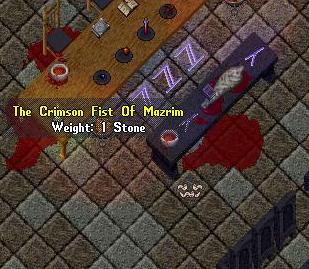 Jamlyn Hakkendyn cautiously made his way over to the table to see what information was inside of the book. He slowly raised the book and as he began to read the title his eyes widened.


Members of the team standing around Jamlyn began to quietly whisper to one another wondering what the Crimson Fist was. Jamlyn answered their whispers loud and clear.

​
"The Crimson Fist of Mazrim were followers of Mazrim."
​
It was silent as Jamlyn threw the book inside of his backpack until a faint cry for help was heard from the northern room. As they made their way over to the next room they found Kitkitarria locked in one of the jail cells. Just as they freed her they caught a glimps of more undead forces making their way towards them. They grabbed Kitkitarria and quickly made their way north out of the room and up the stairs. They found themselves in one of the most beautiful areas resting on top of the dungeon. There Kitikarria and Shef Sigurth were reunited and ready to be married. 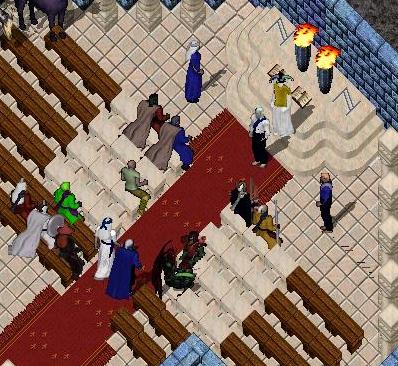 The guests made their way to the seats waiting for the wedding to behind. EM Dudley and Shef Sigurth stood at the alter. Best man, Lord Enterprise and Maid of Honor Silvermoonbeam, made their way down the isle and took their positions on each side of the alter.

The beautiful bride Kitkitarria lite up the room as she gracfuly made her way down the isle escorted by Jamlyn Hakkendyn. The bride and groom looked at each other for a moment. With just one look and not a single word spoken they had conveyed to each other something that can't even be put into words.

​
EM Dudley
​
"Friends and Family, we are gathered here to witness the union of two souls. They join this day to continue the circle of life. They join a never ending linkage, A never ending continuation of the Love's power to endure through good times and bad. Through torment and torture. Through joy and revelry. It is by this virtuous union that we witness their commitment to one another. And so the cycle continues The circle of love lives on, now and forever

Shef Sigurth. Do you take Kitkitarria to be your wife, your comrade in battle, your partner in love Now and for never ending and everlasting?"
​


Shef Sigurth
"Do I really have to ride with her in battle, She likes to flamestrike me instead of the enemy, Although she is the love of my life, so yes I think I will."

​
EM Dudley
​
"And do you Kitkitarria take Shef Sigurth To be your comrade in battle, your partner in love. Now and for never ending and everlasting?"
​ 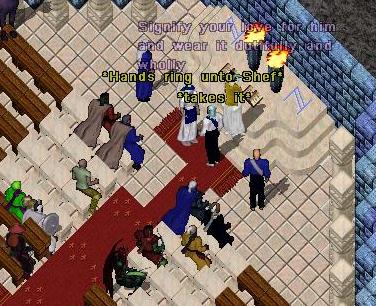 ​
EM Dudley
"Turn and face one another please. Then so these two willingly and joyfully enter this union And continue on the for everlasting circle of love. The continuation of love and virtue. We signify the never ending nature of this union with a ring.Take this ring and give it to Shef. Signify your love for him and wear it dutifully and wholly"


Kitkitarria took the ring and placed it on Shefs finger.


EM Dudley
"And now Shef. Take this ring and slide it unto the finger of Kitkitarria.
Signal your love for her with this token. Be true to her always and always be true to the love you have. Today and always. May the exchange of these rings be forever remembered as the By which it was decreed the love these two have for one."

Shef took the ring and placed it on Kitkitarria's finger.EM Dudley
"By that mutual exchange I now pronounce you, Husband and Wife.

You may kiss your bride!"​ 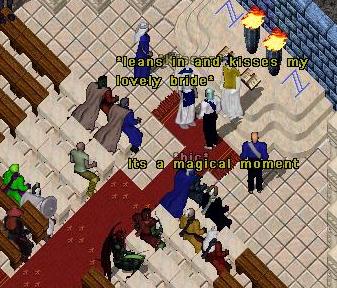 EM Dudley
"Ladies and gentlemen! For the first time....Mister and Misses Shef Sigurth!!"