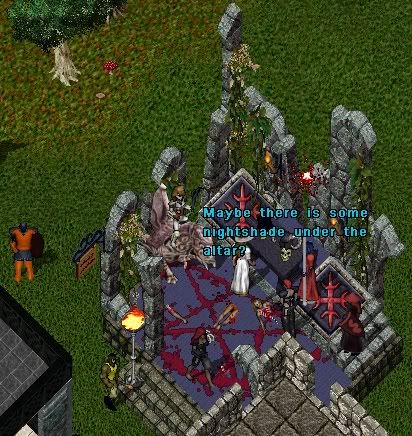 ​
In the early evening hours, Kijustsu Anei Village felt a mild shake in the ground. Most village residence are use to these mild shakes but what they are not use to is large ruins coming to the surface. Honorius Mages believe these ruins were sent from the Void Gateway, to show its support in favor of the Magician Image.

Shiela, Lady CaT, Niva the Savage, Neira, Oni, Wild Lemons, and Gareth all went to investigate the location. The large ruins appeared to be a altar of some sort with unknown magic tied to it. While they attempted to learn more about the ruins, a lady in a white dress with spellbook in hand approached them from the south.

She introduced herself as Investigator Jen, and I am sure village inhabitants were not very welcoming. She started to ask questions about Nightshade, and if anyone in the village has been recently using it. The responses of no she received were rather interesting, even the mages were not using Nightshade? Jen requested to be allowed access to each building in the village. Lady CaT suggested she start here first and check under the altar. 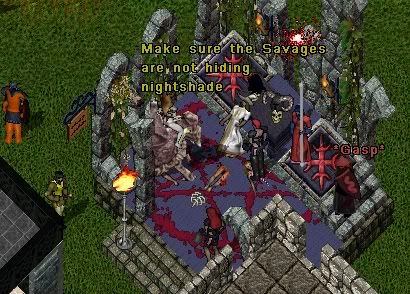 ​
Jen was down there for a rather long time, but CaT told her to keep looking. As Jen came out from under the altar table, she said she would search the savage hut next. Just as she stood up straight and took her first step she slipped! She slipped on the blood that was on the floor and knocked her head right on the stone table!!!! 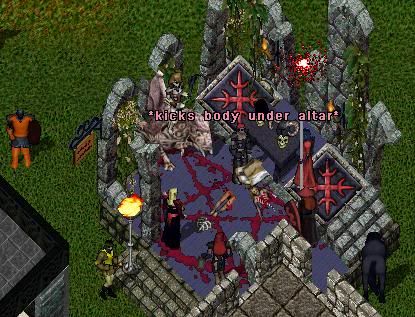 ​
It was like someone had stuck a sharp object into her, and knocked her into the table BUT THEY DIDN'T!!! She Slipped....slipped...slipped...sharp object..slipped. What happened after that, no one knows for sure. Many around Kijustsu Anei Village worry that she was one of Balandars investigators.

If I was one of those at the Altar that evening. I would pray to the Proverbial Goddess of Death, that Jen was not one of Balandars investigators.