Massively Exclusive: Choose My Adventure: The first week of TERA


Choose My Adventure: The first week of TERA 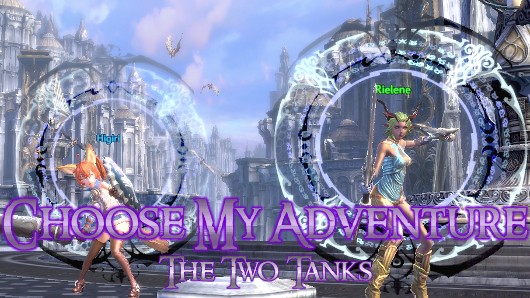 ​
I wouldn't be very good at handling Choose My Adventure if I didn't do my homework, and that's without even taking into account that playing a game kind of falls under the header of "homework" in this situation. So I knew full well what I was getting into in TERA when I saw that first a Castanic Warrior was winning the class and race polls, followed by an Elin Lancer.

This intrigued me because this meant that the two tanks classes were first in everyone's mind. And I knew enough about the game from external research to know that these two classes are as different as can be, not to mention that the two races winning the poll are probably the two races most noted for the controversies mentioned in the first column.

So I had an idea. If I couldn't get a clear picture of the game from just one selection, I'd get it from two. And thus were Higiri and Rielene created on Celestial Hills, an Elin Lancer and a Castanic Warrior, the top two results. And they really couldn't be more different. 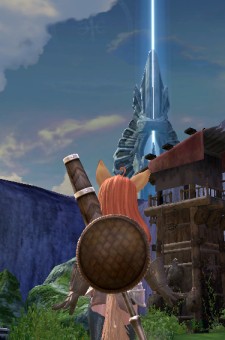 For the minority of players in the audience who haven't played the game, let me sum up: It starts off by kicking you into a prologue sequence. To make a long story short, you're part of a team sent to investigate an island that popped out of nowhere. The expedition runs into troubles (a lot of monsters), an important NPC dies or vanishes, and... then you wind up back there through a not entirely well-explained sequence of events.

The prologue already had points against it, in my mind, because it uses a trick that's become all too common in games: the prelude in which you're totally awesome, followed by the actual game where you have to work back up to all that awesome stuff. It's one of those little tropes that bothers me mostly because it means the game kneecaps your progress. You don't feel like you're getting better; you feel like you're getting back to the point you had already reached.

But it's made all the worse in TERA because combat in TERA is just plain not like other games. In World of Warcraft, you can spam the buttons on your hotbar with confidence that you'll pick up how everything works pretty quickly. In TERA, just spamming attacks gets you killed in short order, and the prologue isn't very dangerous but does still offer you many chances to hit a brick wall and get frustrated. Especially if you start as a Lancer.

Still, that's a brief sequence. And once you've run through it with one character, you can skip it on everyone else, so points for that. You wind up on the Island of Dawn regardless, kitted out in your normal starter garbage and ready to start smacking things in the name of science and general murderous rage. Controls are quite simple, and thankfully so. Your left click is your attack, your right click is your defensive move, and hitting a corresponding number key for your abilities activates them. Clicking those abilities to activate them isn't an option, but you can set up ability chains with which you activate a skill following a specific trigger just by hitting the spacebar. 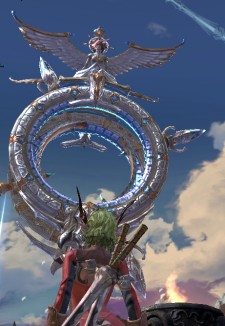 Taken as a whole, combat is actually very well done. What little I've played of Guild Wars 2 didn't seem to have done much with the whole idea of active combat, but TERA takes it and runs with it. It's got the same sort of energy you see in games like Kingdoms of Amalur or Mass Effect 3, and that's a good thing. Sure, you have a small skillset, but when you're trying to deal with two or three huge things pounding on you that's an asset. Especially with a Naga, all of your abilities are close at hand, and combat has a nice and engaging flow. If my character got hit by an attack, it wasn't because the game just arbitrarily made something impossible to dodge, it was a direct result of me not paying attention.

Of course, combat is also where Lancers and Warriors show their differences. And the latter is a lot more fun.

Lancers are, in essence, the traditional MMO class out of the lot, a heavily armored tank with a shield and a comically oversized weapon. Higiri's defensive maneuver is to block with her shield, staying in place and warding off damage thusly. She also has absolutely zero offensive power to compensate for the heavy armor and tanking skills and so forth.

Warriors, on the other hand, are the other tanking class that specializes in evasion tanking. And in this game, "evasion tanking" doesn't mean "my dodge is really high"; it means that you keep attention and then weave out of hitboxes through a combination of kiting, circle-strafing, and your defensive leap out of danger. Your attacks come quickly, and several of them have added effects. Some reduce incoming damage while you activate them; others deal more damage when your health is lower or the like. 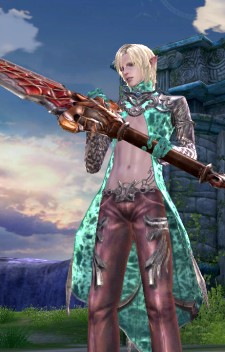 Herein lies the problem: For my money, Warriors are just plain more fun than Lancers. In such an active game, ducking and dodging around is a lot more advantageous than blocking things outside of a party.

Let's take the tree elementals that the early parts of the Island are just lousy with. When you're fighting them, it's very easy to defend against their attacks. You can easily weave in one or two shots, then either block or dodge to avoid their next attack. The difference is that when Rielene springs around, she can keep attacking while the elemental is swinging, and then keep attacking before his next attack rolls around. Higiri has to keep up her block or she'll be locked into her attack animation and wind up taking damage.

And these are the slower and more ponderous monsters. Later you get up to stuff that will give you a very brief window to attack followed with a longer attack sequence. Stuff that spends a good three seconds swinging, stuff Higiri just pokes and then blocks and waits... while Rielene is hacking away like a horned Cuisinart.

In a party, I have no doubt that Lancers can operate very effectively by totally ignoring the little attacks and just blocking the big stuff. Solo, that option isn't really there, and as a result they're a lot less fun to play. Frankly, they seem less fun to tank with, as well; I like more skill-based tanking akin to what the Warrior offers, although I'm sure it has a monster of a learning curve.

Lancers, in other words, are a poor representation of what TERA offers because the combat is a lot of fun when you aren't rooted in one spot most of the time and trying to time all of your blocks. Between that and the fact that the endlessly creepy Elin won, I have to wonder whether someone was stuffing the ballot box in the hopes I'd dislike the gameplay.

Having spent all that time talking about the combat, I bet you're probably wondering about my impressions of other aspects of the game. And there are a lot of little touches that I like in the game besides all of that, but in many respects, the combat is the one thing that the game does uniquely. Everything else is handled... I guess "competently" is the word I'd go for, with some little flashes of brilliance.

For instance, the game has only three different quest types for the most part: go talk to this guy, go kill these things, go collect these things (often by killing things). But I did like that the objectives are marked with appropriate icons, thus sparing you from killing the wrong kind of bear for the bear-killing quest. I liked the charm system and the fact that the gems were both easily removable from items and didn't just give flat stat boosts, but they're not really revolutionary elements. And I liked the fact that gear was very streamlined, but that's also something I kind of expect from a game with such a direct playstyle.

And yes, leaving aside character model and clothing issues, the game is particularly beautiful. That doesn't really have much of an impact on actual gameplay, but it does mean that it's a visual treat. I would be remiss if I didn't give appropriate praise to a thread on the official boards about tweaking the game's performance; my computer is having various issues, so I'm not able to play the game in its full glory, but that thread made things much better. A shame that none of that is in the official options screen, but that's what it is.

I could probably keep ranting about various issues here and there for another thousand words, but I'm sure I can find space for further impressions in subsequent weeks. Thus far, I'm enjoying it, but I now have two characters off the starter island and into the larger world. That means I can explore separate things with both of them, and that is an interesting prospect indeed. So let's hit up the polls! (In the event that the same thing wins on both polls, I'll probably take the second-place result for one of them.)
CMA: What should Rielene (primarily) do next week?
Continue the PvE questsLook for instancesFocus on craftingCheck out the roleplaying communityAll of the aboveVote

CMA Bonus Round: Which rant were you sadly deprived of this week?
The obvious Elin/Castanic rant that you've got in your headMore about the quest designSomething about storytelling and the game's roleplaying weaknessesA rant about PvP and how the game handles itI was the guy hoping you'd just roll an Elin Lancer and be bored, but I think the ship has sailed on that rantVote

Eliot Lefebvre has been choosing his own adventures for three months, but now it's time for him to head back to the front lines of Choose My Adventure, the Massively column where you make the choices about what our writer will be doing each week. Come back each Wednesday for a new installment and a new set of choices!
Click to expand...