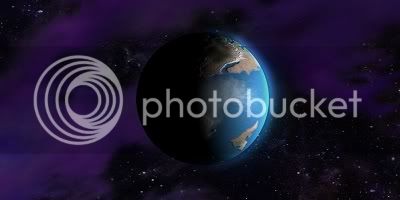 There are numerous indications that place Ultima - and the shards themselves - at some point in the distant future.

Tabula Rasa - at least as far as most are concerned - occurs in a different fictional universe than Ultima. (As Garriot no longer possesses the rights.) However several elements alluded to in Ultima 2 / Worlds of Ultima: Origins - such as the Logos and a war between various advanced races - reoccurs in Tabula Rasa.

We thought we were alone. We felt secure in our future. Little did we know that we would end up being plunged into an intergalactic war that has been raging for millennia.

With every great story, there must be a beginning. As with every great discovery, there must be a first. Our story begins thousands of years in the distant past with the Eloh, an ancient and highly advanced alien culture. The Eloh civilization chose to devote their time and energy to peaceful pursuits of study and introspection. Over thousands of years they finally realized the key to a powerful science that unified all known theories of physics. With this knowledge they developed Logos, through which they gained the mystical ability to manipulate matter, energy, and force in unique and powerful ways.

[...] As the Eloh begin to use their knowledge of Logos to travel the universe, they forge the beginnings of an intergalactic culture where they openly share their knowledge with all the races they discover that are advanced enough to understand it.

Upon many planets, the races they discovered were in their infancy and too primitive to share in the Eloh's knowledge. The Earth was one such planet. But the Eloh are an altruistic people and wanted to someday return to these primitive worlds. They left seeds of knowledge for these races to discover, including the language of the Logos so that one day, when these cultures were ready to understand, a relationship could be established with them.

Other races that were advanced enough for the Eloh to make contact with accepted the gifts of their knowledge and their cultures thrived as a result of their interaction with the Eloh. But not all worlds would be content to embrace the Eloh as their benefactors. The Eloh had never encountered such a race; that was until they traveled to the planet Thraxis.

[The] Thrax [are] a warlike, xenophobic species, and when they encountered the Eloh, their logical reaction, of course, would be a mixture of fear, anger, envy, and distrust.

The Thrax had advanced technology and were highly intelligent. They recognized an opportunity and learned as much as they could from the Eloh, always with the intention of one day using the Eloh's gifts to their advantage. Ultimately, the Thrax turned on the Eloh, catching them off guard and landing a devastating blow to the Eloh culture. The Eloh's understanding of Logo's [sic] was superior, and they were able to, in the end, overcome the Thrax and emerge victorious. But the damage that had been done to the fundamental beliefs of the Eloh people would ultimately lead to their downfall.

On one side, many Eloh felt that, although they might need to exercise more care in the future, their encounter with the Thrax was atypical and their goal should be to continue as before, sharing their knowledge with others for the betterment of both those races and their own people. Another group of Eloh, which eventually became known as the Neph, felt that the cost of sharing the knowledge and advancements they had spent thousands of years achieving was far too great. They believed that less advanced cultures were not worthy to bestow this knowledge upon, and instead, these races should be given "guidance" from the Eloh to ensure that the Eloh always retained their rightful place as a superior race.

[...] As the schism grew wider and more fractured, the Neph joined forces with the remaining Thrax, and with the use of Thrax weapons and tactical knowledge, quickly overthrew the Eloh home world destroying any Eloh that opposed them. The surviving Eloh fled to the far reaches of the Universe, finding refuge and anonymity on many of the worlds they had visited. Without the Eloh presence to stand in their way, the Neph began aggressively implementing their plan for the Universe.

[...] Hundreds of years later, a small blue planet that the Eloh had visited thousands of years prior began to make rapid advancements in their civilization. They began broadcasting radio waves, building large cities, testing nuclear devices, and launching spacecraft into the cosmos. It was in this way that the Earth finally captured the attention of the Bane.

To clarify something, Bane is the term used to describe all of the forces fighting under the Neph army and includes the Thrax and many other races and genetically engineered creatures that fight for the Neph.

Once the Bane forces became aware of the Earth, they invaded the planet to acquire its resources, both natural and biological, just as they had done so many times before on other worlds. Their method was precise and swift, and in a mere 5 days, the Earth was completely over run, and humans became firmly entrenched in a celestial war that had already lasted for hundreds of years.

But the Eloh had not forgotten the fledgling races they had visited. They left knowledge and technology behind that allowed a select group of humans, chosen for their ability to learn and use the power of Logos, to escape. These refugees escaped to a handful of alien worlds where they could then be trained to fight the Bane. On these worlds they found allies, other sentient creatures fighting for their survival against the ruthless Bane. And so, the Army of the Allied Free Sentients was born. That is the story of Tabula Rasa. What happens next is up to you. The future is yours to write. A blank slate.
Click to expand...