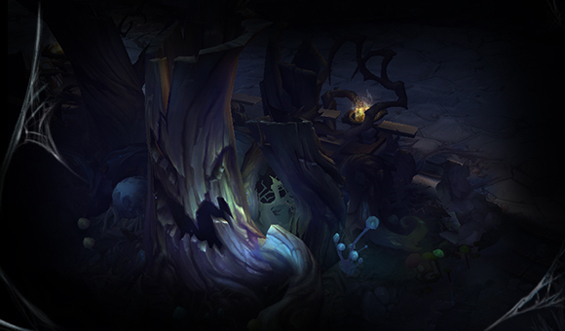 Since the release of Twisted Treeline, weve been paying close attention to your feedback on the map. While many of you are pretty passionate about 3v3 League of Legends, youve also shared thoughts on where theres room for improvement. We want your 3v3 experience to be as fun as possible, so were launching a new, Beta version of Twisted Treeline in the next patch that reflects many of your suggestions. Still, theres more we can learn from you, so be sure to continue posting your Beta feedback to the Twisted Treeline forums.

Heres a rundown of major changes youll see on the new Twisted Treeline:

On the original version of Twisted Treeline, bruisers and blink champs reigned supreme. In the new version, we wanted to open the playing field to a greater roster of viable champions. To do this, we updated the item shop with a new arsenal, removing some of the heavier tank items intended for use in 5v5 matchups. We also added some brand new items aimed specifically at roles that have traditionally struggled on Treeline. These new items should make beefier champions easier to take down with a team of three and help beef up their more fragile counterparts.

To help you chase down champions with blink abilities, we also made some adjustments to the terrain. We broke up some of the longer walls, creating shorter chase paths for running down enemies that dive over a barrier with a movement spell. We also thickened some of the remaining walls to make them more difficult to blink over. Itll be much more difficult for champions like Ezreal or Shaco to cut and run when you have them cornered. 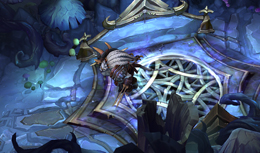 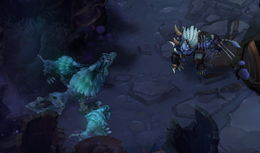 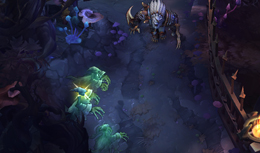 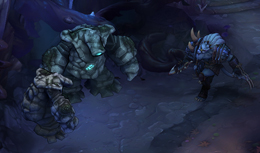 Because the monster camps on the original Twisted Treeline are randomized, a player could potentially find himself facing an extremely difficult jungle route simply by luck of the draw. This pushed players toward selecting only the heartiest of Level 1 junglers to ensure that they get off to a good start. Moreover, the vast majority of the jungle was situated in the upper half of the map, which could complicate effective ganking of the bottom lane.

To improve on this, we removed most of the upper jungle, leaving only the lair of the boss monster above top lane. We then placed three reliable monster camps on either side of the map to open the playing field to new junglers. This focuses the action toward the center, where junglers can easily threaten the champions laning on either side of them. To make things even more treacherous, we removed Sight and Vision Wards from the item shop and created more openings from the jungle into the two lanes to promote aggressive ambushing  no more warding the middle and laning gank-free at bot!

While many games of the original Twisted Treeline were shorter than your average matchup on Summoners Rift, some turtle strategies could really drag out a match. A losing team could very easily dig in at the natural choke point near their inhibitor turret, and could drag super minions into the shrine turret once their inhibitors were down.

To make Treeline games finish faster, we widened the two entrances to each base so that sieges are easier to break. We then moved the Summoner Platform further back into the base and placed a wall around it to keep the laser beams off the minions. This should shave some time off your next victory on Twisted Treeline by helping you kick in the door on a team thats turtling in their base. 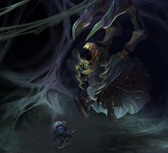 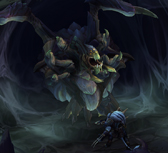 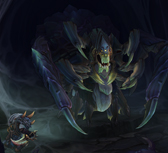 One of the main attractions of Twisted Treeline is high-intensity gameplay focused on ganks and team fights. So to keep the aggression flowing, we decided to add some brand new mechanics. First, there are now altars in the jungle on either side of the map. These altars are captured by proximity, and offer a team-wide buff once captured. Capturing your opponents altar to steal the buff from them should lead to more of those frenetic, jungle team fights that are hallmark of Treeline.

Weve also replaced Ebonmaw with Vilemaw  a horrifying giant spider boss that lurks above top lane. This is a dynamic new encounter more akin to taking down Baron Nashor than the old Dragon fight, and will net your team a global buff and hefty chunk of gold.

If youre new to 3v3, we hope these changes will inspire you to bring your favorite champions to a new battlefield. On the other hand, if youre currently a hardcore Treeline player we hope this update brings you even more of the things you love about 3v3. Were about to enter Beta, and we want you to continue helping us improve 3v3 combat in League of Legends. Were committed to making Twisted Treeline into the best experience it can be, and have a Design team specifically dedicated to supporting and iterating on the new map. Were not happy until youre happy, so keep your feedback coming!

Remember to leave us your comments in the Twisted Treeline forums.