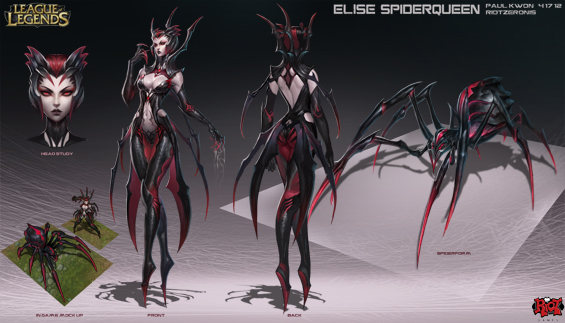 Elise, the Spider Queen, is poised and ready to unleash her horrific powers on the Fields of Justice. We spoke to some of the Rioters involved in bringing Elise to life and asked them about the challenges of arachnophobia, visual design, sound design, and what's so damn cool about transforming into a monstrous, man-eating spider. Here's the inside scoop on Elise from the developers behind this dangerous new champion.

ByronicHero: Let's get the most pressing question out of the way, first: Elise is a spider. Were there any arachnophobes on the team?

RIOTSTEEN: It was hard for me to work on Elise because I'm very scared of spiders. She would never have been my first choice to work on. When playing as Elise, I never transformed into the spider because her little spiderlings would freak me out when they were skittering around. I got over it eventually, and watching her creepy animations became pretty cool. As long as it was scary, we were doing it right.

It didn't help that ohmikegoodness isn't at all arachnophobic. I think that he actually enjoyed animating Spider Queen a little too much.

ohmikegoodness: Animating Elise was awesome because there are lots of tiny movements that you can make to give her an unnerving, grotesque feel, even when the character in front of you is supposed to be a beautiful woman.

Originally, when I was animating her human female form, my intent was to create a huge gap between the human and spider forms. When she's human, she's human. When she's a spider, she's a monstrous spider. I wanted to give the spider legs that protrude from her back a twitchy, erratic vibe. I had to de-creepify her a bunch  make her stand up straight and reduce a lot of the twitchiness because it was just too frightening and unnerving.

When our animation director RiotBamDragon goes over animations for review, he looks at everything for little fixes. I found it weird that he only had suggestions for the female-form, when he's usually more comprehensive with feedback. I quickly realized that he never looked at the spider form because he's terrified of spiders. "The spider's fine. Spider's fine. Just ship it." I asked him, "Did you even look at the spider?" "Yeah, I'm sure it's fine," he hastily replied. So the team put a big spider over his desk for the Halloween decorations. I think it's still there.

Harrow: I do feel bad for the arachnophobes, especially when you use one of Elise's signature spider-form abilities, Rappel. You climb up and out-of-sight before dropping down on foes. You can easily creep people out with sounds, too  skittering noises and such. Hopefully, all of these things are fun for the summoner playing as the Spider Queen and horrifying for the players getting devoured by her.

Riot G Mang: Arachnophobia became a big talking point during her development. It's not something I think about on a daily basis. She actually became too scary, so we had to tone it down. Also, something that I didn't know was that arachnophobia is pretty much a uniquely western phenomenon. In China, for instance, there isn't the widespread association between spiders and scary that we have here.

ByronicHero: Could you tell us about creating the Spider Queen's look and feel?

ogsammu: I got to work on the spider's visuals, and she looks totally cool. Working on Elise's spider model was challenging because of the Shadow Isles theme combined with the look of the spider we were going for. Originally, she looked too metallic? Futuristic? We wanted more organic designs rather than sharp, segmented plates, so we found a middle ground.

Iian: At first glance, you see an elegant spell caster. There are plenty of hints to show players that she's got something creepy hidden below the surface. Spoiler alert: she's a giant spider.

ohmikegoodness: She was invading people's dreams. It wasn't even the base skin  it was her launch skin, which is almost creepier than the regular spider in many ways. Wait until you see that!

I watched a lot of video reference for the Spider Queen, lots of black widow footage. Black widows are awfully creepy

ByronicHero: How about Elise's sound design? What were you aiming for with her voices and sound effects?

BelligerentSwan: We had to find as many iconic spider sounds that would really nail the skittering of a terrifying spider, replicating that feeling you get when you hear Fiddlestick's ultimate or "Darrrrknesssssss" from Nocturne; you're terrified because you know what's coming only a split second before it happens. Thankfully, I didn't have to tone down her audio creepy-factor for the lady version as much as ohmikegoodness had to for the look of the human form. With the spider, my imagination could fly with sound design. With the human form, you have an expectation of what she might sound like.

ByronicHero: How does Elise's story play into her abilities?

Harrow: Horrifying spider monster? Horrifying Shadow Isles? Seemed like a perfect fit. She's a cult leader figure and gets her power and immortality by feeding a bunch of people to this horrible spider creature, draining his venom, and creating a concoction that fuels her abilities. So, like any good cult leader, she promises the great power and immortality of the spider god to idiot cultists that follow her to their deaths in the Shadow Isles. In actuality, she just feeds them all to a spider. The promise of beauty, then the ultimate deception  it's paralleled in her play style.

ByronicHero: Tell us a bit about Elise's two forms.


Coronach: Elise's human form is all about crowd control and initiation. The damage you deal with Neurotoxin is based on your enemies' current health. You're encouraged to start fights in human form.

Spider form is all about commanding your army of spiderlings while dishing out damage and skittering around the fight. It gets pretty creepy with Rappel, leaping up and over jungle tree lines to create gank opportunities, leaping over a line of minions to close the gap, or as an escape if she's under serious pressure. If the enemy can kill your spiders, they can essentially knock you out of the fight by forcing you to transform back into human form to build up your army again.

Players' skill with Elise will be dependent on gauging when to transform into her spider form to secure kills. Dynamic usage of the two forms based on what stage of the fight you're in will be crucial.

ByronicHero: How do Elise's spiderlings play into her abilities and fighting style?

Coronach: Each spell you land in human form racks up another spiderling that spawns when you transform, up to a cap. You build up an army and transform to deploy your spiderling forces. An army of spiderlings was the hardest aspect of her kit to balance. It had to be fun and effective, but not frustrating to play against. We're using some more robust, more advanced AI with Elise's spiderlings to make them feel more responsive. You get to have more spiderlings each time you level up her ultimate, and they do this neat fan-out pattern after you transform into spider form. Many of Elise's abilities affect the spiderlings in some way as well, so you feel like you're bolstering your entire army. As long as we keep iterating on this technology, we can incorporate it deeper into the game.

ByronicHero: What were some of the more challenging nuances of Elise's animation, such as emotes and dancing?

ohmikegoodness: Doing the emotes for Elise was a bit challenging  how does a spider laugh or dance? The spider laugh is pretty adorable. You'll really love it. I can't believe we managed to make something on this champion adorable, but it happened.

She does the cancan as her dance. Naturally, it was the best fit considering the legs and all, but we thought it would be really cute if the spiders danced along with her. So they do. Adorable.

Elise's human form laugh was so simple. She had to be dainty, so we used her creepy spider legs to cover her mouth while she laughed  just a simple pose that evoked so much character.

ByronicHero: Let's talk a little bit about how the Spider Queen has changed from the original concept. What are some of the key differences between the original Spider Queen art from years ago and Elise we know today?


ohmikegoodness: We had a lot of changes to her model and the very look and feel of the character. Originally, she had legs as a dress, extra legs on her back  there were a lot of legs.

The original concept was a Victorian-esque half spider-woman with a female torso. We realized that this wasn't something we wanted to go with, but we wanted to keep a lot of the elegance and grace, with the frightening spider as a hidden treat.

The silhouette has to be recognizable and not too messy. You have to be able to quickly recognize Elise on the battlefield. She's one of the most visually interesting characters we've developed and it would've been a shame having her too busy and too messy that you've never get to appreciate her.

ByronicHero: Did anything odd crop up during the Spider Queen's development?

RIOTSTEEN: Making her webs webby for lack of a better word was a challenge. Webs are sometimes impossible to see  like that's kind of the whole point of webs. And iridescent is a look we try to shy away from. At the same time, you want to make the webs instantly recognizable. Since she's from the Shadow Isles, she had to be mysterious and magical as well. Her color palette had some pieces to it that just didn't mesh well together. It was hard for me to pull off, but in the end, I mixed in more real webs with some magical elements and was happy with the result. I think everyone will like it.

In team fights, there's a lot going on. You instinctively want to dial the effects back to not clutter up the screen. You don't want to make every ability extra flashy because you can potentially confuse players. Elise strikes a nice balance.

BelligerentSwan: We have the same issue in sound design, as well. As we improve technologies and create new stuff, we don't want to overshadow the sound effects from earlier champions with louder cacophony. We have to be very careful when picking and choosing new sound styles.

Picking the right sounds to accentuate each champion's defining characteristic is the key. We focus on what makes Elise stand out. Now, multiply everything with the Spider Queen by two, because she's got two forms, each with its own distinct flavor. At the same time, she has to fit in with the other champions. Frustrating? Occasionally. But once we hit the right balance across her abilities, with a unique sound effect that we've honed in on as her signature thematic element, it just worked so well.

ByronicHero: Anything else you want to share about Elise?

Harrow: We wanted a Spider Queen with a jarring, frightening transition between two forms. I think we've achieved that.

Coronach: There was a lot of appeal in watching Elise swap forms. We had to give her something more than just a hot lady who turns into a spider. She looks twisted.

ohmikegoodness: Some characters are very straightforward to create. The Spider Queen originally began as something much different, but that evolution was what made her special. She's decidedly jarring in that she goes from the regal perception to a monstrous, devouring beast in a split second. You almost forget you're fighting an immensely powerful creature until it's too late.